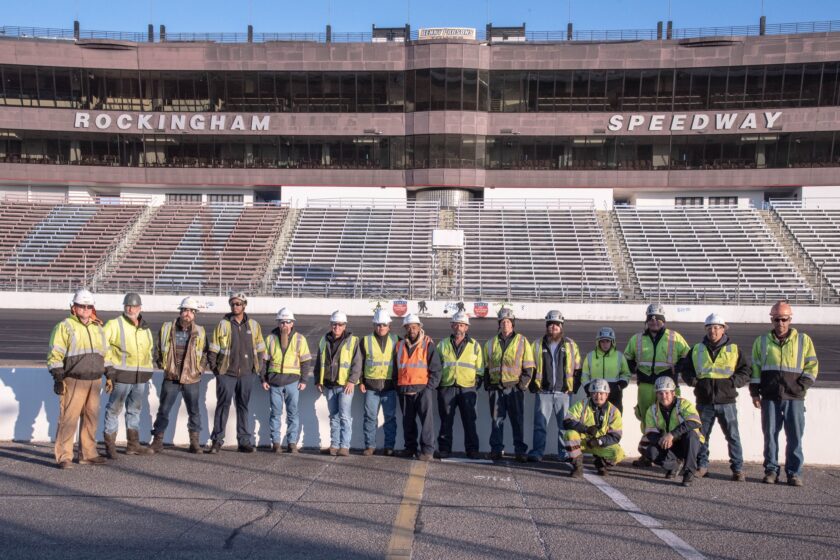 (Editor’s Note; A Good continuation of the new year, “God fortsättning på det nya Året.” I’ve been following all the works that been done to Rockingham Speedway, on social media for some time now, and with the repave ready, and plans for a open house on March 4th being set. This might be a good time for Dave Fulton tell us a bit about the history of the Race Train going to one of the very first Cup races back in the mid-sixties. //B.)

With the Halloween season behind us, it seems an appropriate time to remember the Ghost Trains to a Ghost Track. I reference the special race trains that ran to the now shuttered North Carolina Motor Speedway near Rockingham in 1966 and 1967. The trains are now ghosts as is the track.

The “Race Trains to Rockingham” were the brainchild of Kenneth Campbell, co-promoter with Paul Sawyer of the Richmond NASCAR dirt track. Campbell and Sawyer operated from a non-descript Belt Boulevard one-story brick building on Richmond’s south side, across the James River from the Atlantic Rural Exposition’s Virginia State Fairgrounds Strawberry Hill half-mile. Lettered on the glass entrance door were two company names – “Paul Sawyer Promotions” and “The Campbell Company.”

By the mid-60s, Sawyer was devoting all of his energies to the facility that would later become his jewel – the ¾-mile Richmond International Raceway. Campbell, on the other hand, was involved in a number of ventures besides the racetrack. He had the rights to promote Lawrence Welk and his Orchestra and their appearances east of the Mississippi River. He also had rights to promote San Francisco-based Roller Derby east of the Mississippi and arrange the television syndication and ad trade outs for Roller Derby telecasts on east coast TV stations.

Campbell stumbled into racing more or less by accident. During World War II, the Green Bay, Virginia native was a Marine aviator fighter pilot in the South Pacific. He was credited with a number of Japanese Zero “kills.” Most of his early Marine flying companions were killed in action. The good Lord help any rental car counter agent at a racing venue in later years who tried to put Campbell in a Japanese-built automobile. He would have had a tough time with today’s NASCAR Toyota teams.

Using the G.I. Bill, Campbell enrolled in accounting classes at the Richmond Professional Institute when he was discharged from the Marines. Nelson Royall, who had just built Royall Speedway in Chesterfield County outside Richmond, hired Campbell in 1949 to sell race tickets and keep books. In 1959 that venue became Southside Speedway and Campbell was already teamed with Sawyer who had lost his previous partner, Joe Weatherly, to the Ford factory racing team.

In the mid-60s, Virginia was a hot bed of NASCAR weekly racing and Grand National racing. Grand National races were held at two different tracks in Richmond and in Roanoke, Hampton, Manassas, South Boston and Martinsville. Parking lot surveys of license plates at Darlington and Charlotte revealed more Virginia tags than North Carolina and South Carolina combined. Promoter Humpy Wheeler in later years remarked that if the North Carolina – Virginia border ever closed, so would Charlotte Motor Speedway.

It was in this climate that the new North Carolina Motor Speedway at Rockingham opened in October 1965. A license plate survey of the Rockingham parking lot showed the same abundance of Virginia tags as seen at Darlington and Charlotte. This news prompted the idea for Campbell’s “Race Trains to Rockingham.”

Back in 1965, the famed Seaboard Air Line Railroad was headquartered on Broad Street in Richmond, not far from the Moore’s Field NASCAR ghost track venue or the State Fairgrounds half-mile. After the first successful Rockingham race, Campbell approached management at Seaboard about taking race fans to Rockingham. Seaboard had its major maintenance operation just down the road from the track in Hamlet, where it once operated a huge hotel.

By late 1965 when Campbell approached Seaboard, the line had replaced the noted Orange Blossom Special of musical fame with its New York to Florida Silver Meteor train. It was on the Silver Meteor that Campbell convinced Seaboard to add a number of passenger cars for race fans only and take them to the first, last and only Peach Blossom 500 at Rockingham in March 1966. I have previously written extensively about my adventures aboard that first train outing to Rockingham at various sites with an article titled “Race Trains and Peach Blossoms.” ( Click Here)

It was the good fortune of we race fans that Seaboard had a major siding from Hamlet that ran right across the highway from the Rockingham track. That’s where we were put off in the morning and picked up at dark by the northbound and southbound Silver Meteors.

After convincing Seaboard to add the race fan cars to their train, Campbell negotiated with J. Elsie Webb at Rockingham for discounted grandstand tickets. The race train to Rockingham began in Washington, DC with stops in Fredericksburg, Richmond, Petersburg and Raleigh, before arriving at the Rockingham siding where we were discharged. For one price, we got our train ticket, our race ticket and a box lunch.

Every race train adventure was exciting and full of memories. On the first 1966 train, we met four NASA employees who had to launch a rocket on Monday morning from the Wallop’s Island, Virginia rocket base. The last time Frank and I saw the NASA guy named Otis, he was passed out on the floor of a Rockingham men’s room. We always wondered if that rocket blew up.

This piece isn’t about the races, but the means of getting there and back, but we did see some amazing racing on the original Rockingham low banked track that existed until 1969. That’s the Rockingham configuration I’ll always prefer.

When we made our first race train trip in March 1966, Darel Dieringer was driving the #43 Plymouth for Richard Petty, who’d broken his thumb playing touch football. The factory Fords were all there before their boycott, but it was the Ray Nichels Plymouth of former motorcycle champ Paul Goldsmith, a graduate along with Joe Weatherly of cycles on the Richmond dirt track, who brought his #99 hemi home first. Frank and I got our pictures in Stock Car Racing Magazine standing next to Miss Firebird, Winkie Louise at the start-finish flag stand as the checkers dropped.

In March 1967 it was pouring rain at 9:00 a.m. Sunday morning as our train passed through Southern Pines and learned that Rockingham officials had postponed the race until June, afraid of what the morning rain would do to their race day ticket sales.

With no way to get home until the Seaboard Silver Meteor returned northbound from Florida around 6 pm, our passenger cars were shuttled into the Hamlet rail yard. Officials tracked down the owner of the Hamlet movie theater where we were shown a free screening of the Haley Mills film, “Pollyanna.” Listening to a large group of imbibing race fans in a darkened theater watching Haley Mills was quite an experience for our 18-year-old ears. To add insult to injury, when we exited the Hamlet movie theater around 1:00 pm, the sun was shining brightly. It was a perfect afternoon for racing, but we had 5 more hours to kill hanging out around the old Hamlet train station and walking the abandoned Sunday afternoon streets of Hamlet. Our train fare was not refundable and I drove Frank and me to the rescheduled June 1967 race.

On Halloween weekend of 1967, Frank and I made our final trip aboard the Seaboard Air Line “square wheeled special” (Frank’s name for the rough riding Seaboard line) race train to Rockingham. It was at that race that we saw the great world Formula One and Indy 500 champion, Scotsman Jim Clark, make his only stock car start. He was aboard the Holman-Moody Ford #66, but engine failure doomed his run after steadily moving through the field.

I was in school at Campbell College in the tiny North Carolina burgh of Buies Creek when the final race train made its Halloween weekend 1967 run to Rockingham. Frank boarded the train in Richmond and I went aboard in Raleigh.

All went well until my promised ride back to school failed to appear at the Raleigh train station. Several times in the past I had hitch hiked from Charlottesville, Virginia to Washington, DC – but always with two or three buddies – never alone. On this dark and spooky Halloween weekend Sunday night, it was just me and my thumb against the ghosts and goblins traversing several backwoods, rural North Carolina highways. Finally, I got back to school – tired and shaken – in the wee hours of Monday morning.

I made dozens more trips to Rockingham after 1967, but never again on a train. The race train fell victim of the July 1967 merger between Seaboard Airline and its chief New York to Florida rival, Atlantic Coast Line Railroad and the later takeover of U.S. rail passenger service by Amtrak.

Those now “Ghost Trains” to a “Ghost Track” – Rockingham – were wonderful adventures.

Race train promoter Kenneth Campbell went on to become the first spotter for CBS on their live Daytona 500 telecasts. He retired from racing after the 1999 sale of the Richmond track to International Speedway Corporation.

The wonderful Infield Media Center at the Richmond track, a state-of-the art facility when it opened in 1988 – would later bear the name of the Kenneth Campbell Media Center. It is located next to the Junie Donlavey Garage at Richmond. Those facilities are both being razed as part of Lesa France’s “Richmond Reimagined” initiative. When the rebuilt facilities reopen, I sure hope International Speedway Corporation continues to remember Kenneth Campbell, Junie Donlavey and Paul Sawyer. For years they WERE Richmond racing.

Wonder what would happen if Darlington officials approached Amtrak about running a race train from Washington, DC to the Labor Day weekend Southern 500? It’s a proven idea. I’d love to see the racing Ghost Trains resurrected.

(Editor’s note: This story is published with the permission from the author! It may have appeared previously at RacersReunion.com, GhostTracks.com )

Photo Credit (cover); The Crew that did it, Rockingham Speedway | Facebook