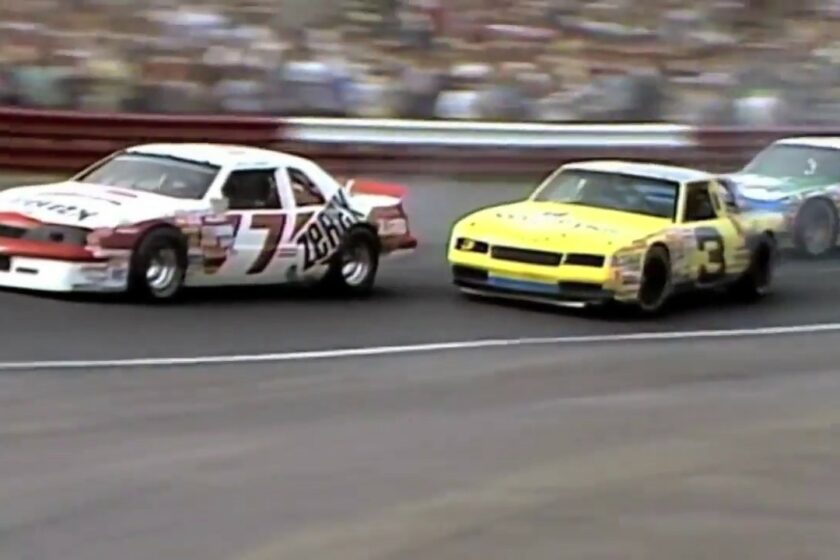 I’m not sure what the average age of the core PTR contributors is, but I suspect it’s a lot older than 41, the age of race driver and NASCAR car owner Justin Marks. I want to offer him honorary membership in our group.

Marks, who is about the right age to be my second child, got a good number of people in the sport talking last month when he suggested a series of NASCAR races featuring cars of the ‘70s, ‘80s, ‘90s, and ‘00s (and the rules from those periods). Several interesting people, including Ray Evernham, jumped on board with the idea.

Then NASCAR proved somebody in Daytona had been listening. It filed a trademark application for both the name “NASCAR Classic” and just about every possibility related to that concept, maybe including the air breathed by those around anybody who mentions it.

That’s where things stand now. It may come to nothing. But if it needs some help to gain momentum, I think those of us in the “Geezers-Stuck-in-the-Past-Decade-of-Our-Choice” club are willing to offer our (possibly fading) skills.

After all, it was at least six or seven years ago that I proposed the “Cup Classic Series,” which would feature simplified Cup-style cars (I didn’t propose vehicles from decades past) racing at classic short tracks on weeknights prior to nearby Cub events. I think we could smash that together with Marks’ idea and have something.

Now, a couple of HUGE caveats. First, there is no way you could run restored cars from 30-50 years ago safely, at least by today’s standards, so it’s a lot more complicated than that.

Second, Marks, who may have been thinking about the above concern, admitted he was proposing more of an entertainment event than an actual race.

“The quality of the competition would be second to just a celebration of the history,” Marks was quoted in RacingNews.co as saying. “Probably wouldn’t be an all-out race, just a demonstration of the legacy.”

C’mon, Justin, you didn’t go from being a marginal figure in the NASCAR world to owner of a top-tier Cup team by doing things halfway. Let’s take this idea and RUN with it.

Actually, I think a group of visionary thinkers, starting with Ray Evernham, could sit around with Justin Marks and come up with something that might really work and sustain itself. Maybe even more. Have you ever been to a concert when the featured performer got kind of little ticked off because the opening act got the most applause?

With the right development, this idea has a shot at reaching that level.

Unfortunately, that brings up NASCAR and its trademark. If Daytona has said, “We’re running this show and don’t need your help,” then my enthusiasm starts to wane. The people who gave us the charter system and the current rule book just aren’t on the same page as this geezer.

At some point, I’d toss into the “vision group” meeting another idea I’ve championed for a long time: start the competition with an appropriate period during which the teams would build their car from a provided mountain of junkyard parts. For the “Classic” series, we could buy up all the old Monte Carlos, Torinos, GTOs, hell, even Chargers and Matadors if you go back far enough. Somewhere there must be some McDuffie, Langley, Spencer and Warren descendants to show today’s crews how you turn a junkyard find into a racer. Maybe Dave Marcis would help.

NASCAR would have none of that. Where would you put the wine glasses?

OK, I’m sorry. That was a cheap shot. I need to be more positive about the current generation of leadership. Maybe one day. . . .

Of course, that brings up a problem: what rules do you use. My copy of a 1960s rule book is 64 pages for every division NASCAR sanctioned; the section for Grand National/Cup alone was only 8 pages. That’s because there weren’t many rules, at least not until Big Bill France decided a new one was needed to address what he saw as a problem. Then the rules became 8 pages, plus a sentence or two, handwritten. I don’t think that’s the mindset of the current brain trust.

(Editors Note: I just read a story that in some way describes what Frank mention about handwritten addition to the rules: Ford’s Slippery NASCAR Scam: The 1962 Starlift | Mac’s Motor City Garage (macsmotorcitygarage.com) ).

Oh, well, the future of this idea is fraught with the risks related to a sport managed today as a business first, entertainment second, and racing . . . uh, if there’s still room for that. I’m not sure there’s room in that environment for somebody who grew up when success was measured by happy fans leaving the track, not cubic dollars in the right pockets.

I think we have to hope the leadership of any “Classic” series stays with somebody like Justin Marks. He seems to have a lot of skin in the game, and while he is willing to stretch the bounds of the racing world in ways we wouldn’t have imagined back in the day, I think he’s in it as a racer, not a quick-buck seeker. That means he might entertain some ideas that would appeal to the old-timers as well as the younger folks who today are part of what’s left of the car culture.

Justin, you’re welcome to my ideas. The only compensation I ask is that, if it all comes together and succeeds, I can pick an event where my ashes can be spread at the start-finish line when I’m gone.

(PHOTO CREDITS – The cover photo is a screen capture from the documentary, “NASCAR – The ‘80s.” The Justin Marks photo is from Getty Images used by NBC Sports. The South Boston 1963 race is from Short Track Scene, although the actual image is much older. The 1978 Dale Earnhardt and Bobby Allison shots came from Pinterest, so their origin is a mystery. The Big Bill France picture is from RacingToday.com, which got it from NASCAR.)