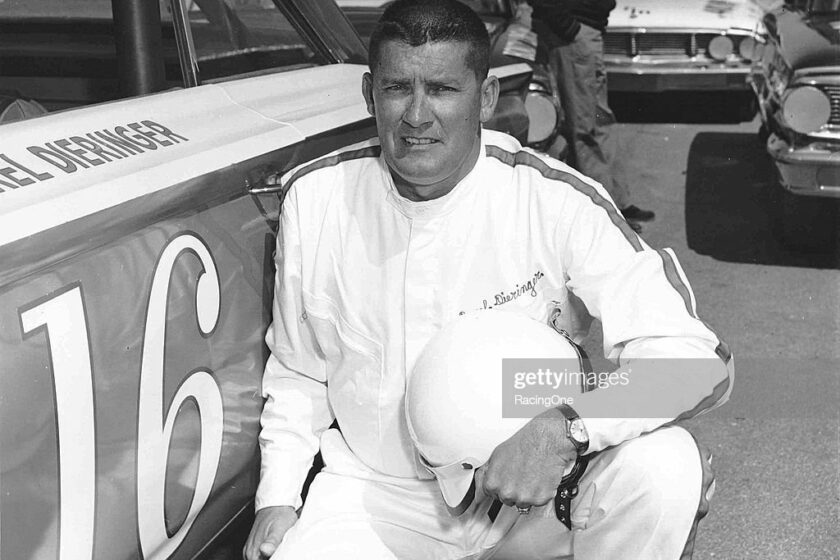 “BOOM!!!” The sound reverberated off walls, guardrails and grandstands.

“BOOM!!!” The sound was heard over the roar of 40-odd NASCAR Grand National race cars.

“BOOM!!!” The sound was horrible and in the 1960s it was the last sound a number of Grand National drivers heard just before their death.

“BOOM!!!” was the sound made by exploding Goodyear and Firestone right front tires on NASCAR’s superspeedways. The awful sound was heard just before a race car careened into or over a wall or guardrail or possibly began to barrel roll, taking other cars with it.

“BOOM!!!” was sickening to hear. It nearly always signaled disaster.

They have one of their own in particular to thank for the absence of the dreaded “BOOM!!!” at today’s NASCAR superspeedway races. That would be the late driver, Darel Dieringer, one of my all-time favorite personalities of many I met during a career in stock car racing.

Car owner, Moore had lost his primary driver, Joe Weatherly in a fatal crash at Riverside the same January and unknown to both Dieringer and Moore, Wade would be dead before the first race of 1965. It was a horrible period in auto racing, both in stock cars and on the Indy circuit. I won’t attempt to list the fatalities that took place between the 1964 season openers and 1965 season openers on the two major United States racing circuits. The losses were staggering and cast a real pall over auto racing.

It would be 17 years after that fall 1964 Richmond race before I met Darel Dieringer. That was in 1981 when I was managing the Wrangler Jeans / Dale Earnhardt NASCAR program. It was certainly my loss to have only known Darel for eight years before he succumbed to liver cancer.

Darel Dieringer was all of those things and a gentleman the whole way.

I never had a hospitality suite at any track when my wife didn’t ask me if I had invited Darel Dieringer. She thought he was really special and she was right. It didn’t hurt that both my wife and Darel’s wife were named Joyce, either.

Darel Dieringer could charm the meanest V.I.P. guest who at first had no desire to be attending a stock car race. Darel’s picture should be above any description of public relations in any training manual.

Daytona bills itself as the “Birthplace of Speed.” Darel, however, was born in Indianapolis in 1926, but made his everlasting contribution to auto racing safety at the Daytona tri-oval.

In a NASCAR career that stretched from 1956 – 1975, Darel made 181 Grand National starts and 21 times drove the NASCAR ragtops. The record book shows he visited victory lane 7 times in his Grand National career.

Darel had first come to prominence driving for noted west coast Ford and Mercury race car builder, Bill Stroppe. His biggest win came in the 1966 Southern 500 at Darlington driving Bud Moore’s #16 Mercury Comet. I was there that day, with my buddy, Frank from Richmond. It was our first Darlington adventure. Ironically, Darel would beat Richard Petty, who suffered a catastrophic tire failure in his iconic #43 Plymouth while leading.

Following his 1966 Southern 500 winning season, Darel was voted “Most Popular Driver” by the NASCAR membership.

Although many would point to the Southern 500 win as Darel’s greatest accomplishment, I’d maintain that his contributions at Daytona during January 1965 are the real claim to fame for the member of the National Motorsports Press Association Hall of Fame.

At the time Darel was chief tire tester for Goodyear. A Goodyear engineer had the idea to see if the manufacturer could mimic Goodyear’s special safety feature “Tire Within A Tire” road tire.

Goodyear engineers affixed a sharpened steel spike to a metal plate and placed it at the entrance to Daytona’s turn 3. Darel’s job was to come down the Daytona back stretch at 140mph and run over the metal spike going into turn 3 and see what happened. Can you imagine the intestinal fortitude it took to make that first run?

Well, the first time by, Darel missed the spike!

Later Dieringer made runs of 150, 160 and 165mph running over that metal spike in the name of saving the lives of yet unborn NASCAR driving stars of the future. The test was deemed a success and Goodyear introduced its new safety inner liner tire at the 1965 Daytona 500. In a nod toward the safety of all drivers, Goodyear shared the technology tested by Darel Dieringer with archrival, Firestone and was given the NASCAR Award of Excellence.

The story of the test session, unfortunately, had a black side. During one run, Darel blew out both the outer and inner tire and hit the concrete wall at speed, fracturing ribs, collarbone and shoulder and destroying Bud Moore’s #16.

Unable to complete the test for Goodyear after the inner liner test of a standard racing tire, Bud Moore called Spartanburg and had his team dispatch his other driver, Billy Wade and the #1 Mercury to Daytona to complete testing for Goodyear.

On January 5, 1965, Wade had a blowout and crash resulting in his death. It was found that he had slid under his seatbelt on impact with Daytona’s not at all soft walls.

Wade’s crash resulted in the introduction of the “submarine” belt, an integral part of the 5-point safety harness that went between drivers’ legs and kept them from sliding under the lap safety belt.

Dieringer later was offered a ride in Junior Johnson’s #26 factory Ford, before being fired by Johnson for what the moonshiner explained as “not pushing the button.”

Recognizing Dieringer’s public relations talent and his ability to work with young drivers, Goodyear named him as their Assistant Field Director. Darel held the position for 5 ½ years before being offered the position of Field Director for Goodyear racing tires. He declined that offer because it required a move from Charlotte to Akron, Ohio.

When I met Darel in 1981, he hadn’t driven a race car in 6 years and had only raced couple of times the last several years he climbed into a car. At the time, Darel was a great champion of driver, Lake Speed.

When Lake was running his own Oldsmobile team in 1988, I was ghostwriting all of Oldsmobile’s factory NASCAR news releases. When crew chief Darrell Bryant and engine builder, J.E. Beard put a winning combination under Speed for the 1988 TranSouth 500 at Darlington, I was in victory lane. Speed was quick to thank Darel Dieringer for being his mentor and sticking with him. It was only fitting that Lake Speed’s only career win would come at the same track where his mentor, Dieringer scored his biggest victory

I once had a public relations and marketing office on Old Pineville Road in Charlotte and in 1989 I was representing several NASCAR car owners, drivers and sponsors.

Darel Dieringer got in the habit of dropping by my office every morning around 9:00 a.m. for a cup of coffee. I was the first stop as he “made his rounds” visiting various race folks and shops. It wasn’t until Darel started wearing one of those little sporty car caps to cover his hair loss from chemotherapy that I realized there was a problem.

Darel never stayed long. He knew folks had “work to do.” But, his visit was a wonderful way to start what might have been a rotten day with a smile. The morning visits eventually stopped in mid-summer 1989 as cancer took its terrible toll at age 63.

Darel Dieringer might not have been a “Renaissance Man,” but he was certainly a “Man for All Seasons.” And though Darel Dieringer was born 22 years before me, I think it fair to claim he was also a BOOMER, even though he earned the title not by his birth year, but by assuring that other drivers would live long beyond their own birth year.

NASCAR may have given their Award of Excellence to Goodyear, but every driver who straps in on every superspeedway owes a debt of gratitude to the late Darel Dieringer. I wonder how many in the contrived “Chase” even know his name?

(Editor’s note: This story is published with the permission from the author! It may have appeared previously at RacersReunion.com, GhostTracks.com)