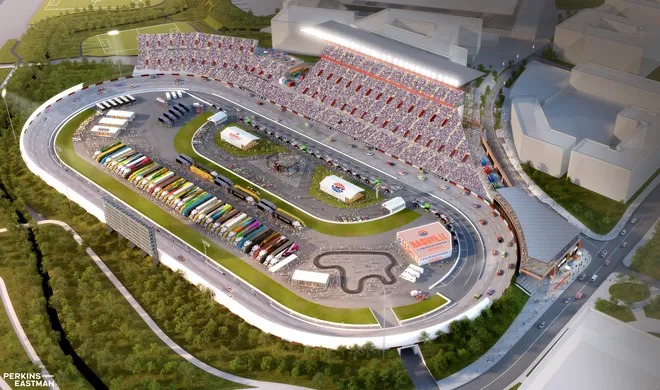 Big news this week out of Nashville.

Ink is drying on the paperwork to make Cup racing’s return to the Nashville Fairgrounds closet to becoming a reality.

Fairgrounds was my original home Cup track, where I saw my first Cup race. I got to see Richard Petty win, which wasn’t unusual back then. But on that day, he did it in a Ford.

I was sad when Cup left after the 1984 season, but I understood. NASCAR needed significant upgrades to the facilities and the Nashville folks just weren’t gonna make them.

NASCAR said fine and left. Didn’t even have another track to go to. Just cut Nashville off the schedule, reducing the 1985 season from 30 races to 28 races and went on racing elsewhere.

Two seasons later, NASCAR added Watkins Glen. It would be 1993 before the schedule returned to 30 races again with the addition of the first New Hampshire race.

where the date for a race there is going to come from?

The schedule is full at its current 36 races with no signs of expansion. Speedway Motorsports Incorporated (SMI) is the driving force behind the Fairgrounds return, securing a 30 year lease between Nashville Metro and SMI’s Bristol Motor Speedway group. BMS will manage and operate the 117 year old facility that will make this possible.

So for Cup to return, SMI will have to find a date from their holdings.

So which SMI gives up a date?

It would be hard to pull one of those. You aren’t going to give up a ROVAL Playoff date or give up a Crown Jewel 600 race are you?

NSS is a recent acquisition. It is in the target Nashville market. It sold out in its first race. Their full stands were a definite positive in 2021. It put on one of the better races, plus there is room to expand, with seating in excess of what the space-restricted Fairgrounds can ever provide. So do you ax that?

To pull from any of the rest means losing a market. To give up ground you currently hold is hardly a positive move. it also means you have another track sitting empty. Empty tracks like the neighboring Kentucky Speedway means it’s not only not making money at the level it could for SMI, but is a revenue drain for taxes, upkeep, maintenance.

That hardly seems to be a successful model. But with that said the recently acquired Dover would appear the most vulnerable of this group.

Will it come from the two date tracks?

It would seem that the Nashville race date would come from a two date venue. One of those could provide a date for the Fairgrounds without sacrificing markets or abandoning facilities. This would seem to be a more favorable transition

Cookie cutter Las Vegas has two dates with one in the Playoffs. It also has another consideration-it’s in Casino-central. Do you want to take a date from there?

Cookie cutter Atlanta has two dates as well but is being repaved and reconfigured with increased banking to turn it into a mini-superspeedway. If successful, would you really consider taking a date from there? Would you take a date from Talladega or Daytona? I would think the two dates there will be safe.

Plus, rumor has it that the Georgia Legislature is poised to pass legalized casino gambling and the SMI bulldozers are poised to break dirt on a major casino complex as soon as the ink dries on that legislation. Wouldn’t two dates help that effort? Wouldn’t it make it an even more desirable (and profitable) venue?

The remaining two-race SMI venue is Bristol. One might say, “Whoa, wait a minute. It has two dates but one is dirt, one is concrete. It should be up on your single race date category with both dates off-limits!”

It’s the same track just a difference due to a temporary removable surface. Don’t bring the dirt in and you have a two venue track we have had up until this season. So for this discussion I’m keeping Bristol in the two date venue category.

Could the Fairgrounds’ date come from Bristol?

When you break it down, Bristol is the logical choice for the Fairgrounds’ race date.

The BMS group is going to be managing the Fairgrounds going forward. That makes sense as they are best equipped to take on this challenge. Remember that the Texas group now manages COTA but a Texas date was given up for COTA. Will the same mode be used for the Fairgrounds? Would Bristol be different?

That said, you keep the summer night Race. It’s a cutoff race. It has shown better racing of late. There is more magic, more excitement with the night race. That’s not going away.

The spring race… that’s another story. The racing hasn’t been memorable. It’s a regular season race. It’s not well attended. Then there is the weather. I’ve sat through snow delays at the spring race. Fans dealt with monsoons this season. Can the Fairgrounds be any worse?

This year, SMI hoped to bury its shortcomings under eight feet of dirt. Massive amounts of rain thwarted that. They are going to try it again in 2022, but this time with the new NEXT-GEN car and running at night. Hope it’s successful, but I’m concerned that dirt and independent rear suspensions along with all the NEXT-GEN aero tricks are going to mix about as well as East Tennessee downpours on a clay covered concrete track.

NEXT-GEN may put on a heck of a dirt show and I hope it does. My concern is with the inevitable comparisons to Xfinity, Trucks and the many other straight-axled Dirt series racing there may not play favorably for them.

NASCAR cannot afford for NEXT-GEN to be the third (or fourth) best dirt race coming out of that dirt racing extravaganza. It just can’t. NEXT-GEN doesn’t need that. It can’t avoid that possibility for 2022, but will get a pass being it is its first season. Can it afford that going forward after the honeymoon is over?

If Bristol wants to run dirt for Xfinity, Trucks and all the other Series that descended on its temporary dirt track, haul that dirt in and make it happen. It keeps the uniqueness and elevates each of their races to Crown Jewel events.

But give the Fairgrounds that Cup dirt date.

What advantages are realized moving the Bristol date to Nashville

It’s racing will be better.

It will make for better TV.

It builds momentum for the season.

It fulfills market demand without sacrificing an existing market or creating another empty facility (we’re looking at you, Kentucky).

It will be managed by the same group-Bristol and that brings huge benefits.

A single Bristol night race makes it more unique, an even bigger draw, a “hotter” ticket and let’s face it, a more full Coliseum will look even better on TV.

It provides NEXT-GEN a graceful exit out of the “Great Dirt Track Experiment” into something new, exciting, historic, iconic.

Seems pretty straightforward to this fan.

But I’m not the deciding factor.

The TV partners will have a say for sure

When you look at the tracks each of the broadcast partners have which do you get rid of for the Fairgrounds?

Which race would FOX ditch for the Fairgrounds?

NBC, on the other hand, gets these choices…

The only New Hampshire?

FOX wanted the dirt race. FOX got a dirt race. Do they want to keep it and kill Dover? Or do they give NEXT-GEN an out from the dirt and take the Fairgrounds as a replacement?

I have a feeling I know that answer. I hope I’m wrong.

Only time will tell.

Lot of interesting things to consider. To date, Nashville has been a soap opera. That soap opera will only continue and intensify as deciding where the date will come from draws near. There will be much talk… speculation… cussing… discussing.

Fun times for all… except for the fans whose home or favorite track are at the center of the conversation, those who may lose their track for this new venue.

I feel your pain. Believe me as a fan whose home track was first the Fairgrounds and later Kentucky, I’ve been there. Done that… twice. Didn’t get a T-shirt, either time.

If your home track is not an SMI track, count your blessings. You may lose a date like Michigan and Pocono has, but it won’t for the Fairgrounds.

If you are an SMI’er, keep watching, attend when possible and keep praying that it’s not your track sacrificed.

Finally, if you get tickets to that first race, leave for the track early, excessively early. You don’t want to be stuck on the Interstate, listening to it on the radio with tickets in your hand… not that there would be any traffic issues at a first time race at a nearly acquired venue.

Do we know where the date is coming from? No, only Marcus Smith knows for sure and he’s not saying anything yet. Till then, reach up, tighten those belts and hang on.