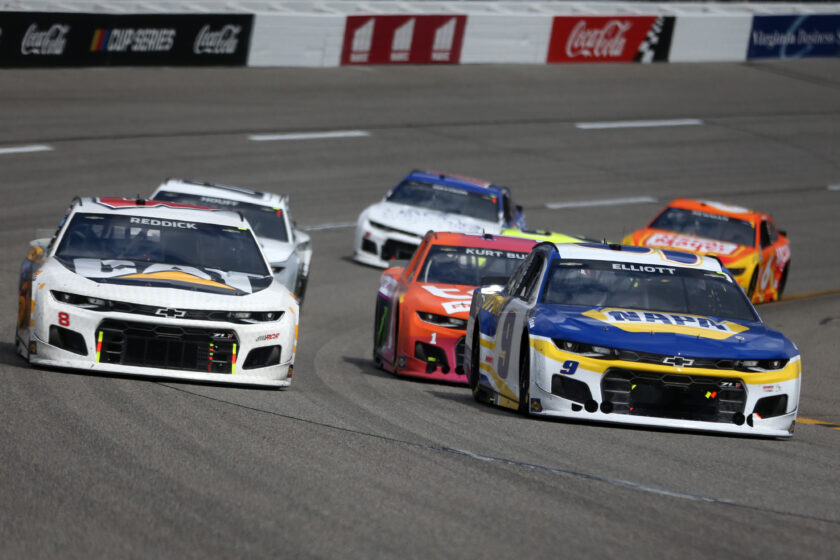 I always try to watch the Invocation and our National Anthem before the race. I was pleased with both. The young lady who sang the Anthem was respectful and had a very nice voice. They normally show some of the drivers during the Anthem, and I smiled when they briefly stopped on Kurt Busch and he was smiling and slightly nodding his head yes. I took this to mean he liked the way it was being performed.

As usual, Mike Joy, Jeff Gordon and Clint Bowyer were in the booth and Jamie Little and Regan Smith were on pit road and Larry McReynolds was the tech for the race.

Some of the talk in the booth was about pit stops and how everything like timing and other stuff going just right and being in sync was one of the keys to winning the race. Larry Mac said it was time to rank drivers 1-10 for pit stop times this year and Hamlin came in first. Regan gave us a summary of how Ryan Blaney’s crew mistake in the pits caused him to lose any chance of winning at Martinsville the week before. Shortly after they announced the first five rows of the race, they went to commercial and I had to laugh because it was a Ford commercial that I saw in my area, and this race was The Toyota Owner’s 400.

Stage 1 was to be 80 laps with a competition caution at lap 30. On lap 3 they told us Haley was coasting into his pit stall. They then mentioned Hamlin’s slow start and then went on to talk about short run and long run speed. Jeff told us it was always a guess on the set up and what you used last time would possibly not work this time. Regan let us know that Austin Dillon said Richmond was his favorite track. After that, they advised us of Clint’s $10,000 give away if you answered 6 questions correctly about the 2nd stage. Mike told us that Ford had 30 wins at Richmond with the first being Paul Goldsmith in 1957. With 25 laps to go in stage 1, it had become a follow the leader race. They showed quite a bit of in car camera images toward the end of the stage. Have I told you how much I dislike in car cameras? When they mentioned the SHR cars were not doing too good, my Don said Tony needs to get more involved as the teams are suffering because he has too many irons in the fire. During stage 1, both the booth crew and the pit road crew were very informative. It was no surprise that Hamlin won stage 1 very easily.

Stage 2 started and it became the same follow the leader race. Mike told us that only 2 drivers had led the first 100 laps, and then shortly changed it to the first 120 laps. They took time to tell us which were the best 3 pit stalls and which were the worst 3. They did a short segment called Under the Helmet with Truex which was about how he and his girl friend, Sherry Pollex does a charity event called The Cat Walk to benefit those who have cancer like Sherry does. Then they told us who the Toyota Top Performers were and Truex was on the top. After that they said green flag pit stops had started and Harvick was in the pits. Others were following, but Newman spun and brought out the caution before the cycle was completed. There were still 6 cars that had not made a trip to the pits at this time. On most restarts, Mike, Jeff and Clint kept getting hyper and acted panicked whenever there was 3 wide racing. They seemed to fear something happening due to that. Then they brought up the fact that Briscoe took the sprint car record for the youngest winner from Jeff which he had held for quite a while. Then Jeff talked to Andy Petree about RCR and how they were preparing for the races. With 53 laps to go in stage 2, there was still very little action on the track. Then with 51 to go, we were told that Kez and Blaney had not pitted when everyone else did and they were on a different schedule which they thought would play to their advantage at the end of the stage, but Jeff and Clint thought it would not be an advantage and questioned the move. That being said, Brad wound up going a lap down before the end of the stage which Hamlin won. For the second time, Mike got the driver who was eligible for the free pass wrong again. Hey Mike, everything okay?

Stage 3 starts and for the first time, KyBusch is in the top 5. Per Jeff, there were 4 JGR cars were in the top 6 and they were getting very good drive off the corners. Their ones to watch for winning were: Jeff-Truex, Clint-Hamlin, Regan-KyBusch, Larry Mac-DiBenedetto to finish in top 10 and Mike-Almirola to finish in top 10. On lap 298, green flag pit stops started and Truex was penalized for too fast entering. He did not go a lap down while serving his penalty. That was strange because normally everyone does go a lap down at that track if they get penalized. They scanned the stands and of the ones they showed, even the kids were looking bored with this race. They then showed us who the biggest movers were. Clint mentioned that there was no grip up high. Then we were told Hamlin had led the most laps so far, but Logano took the lead with 65 laps to go. As green flag pit stops were happening, KyBusch did not make the commitment line so he was penalized. He went a lap down and by then, there were only 9 cars on the lead lap with 50 laps to go. They mentioned that Hamlin, DW and Benny Parsons were tied for the most top 5 finishes without a win. Then they started joking about the bump and run, or the bump and dump that happens toward the end of the race. With 20 laps to go, there was a caution because Harvick hit the wall when he lost a right rear. Everyone pitted and Hamlin came off pit road first. The crew in the booth sounded happy about this. They talked about it being the Toyota Owners 400 race, but then told us that on this date in 1964 the Mustang was launched so it was Mustang Day. Shortly after the restart, Bowman passed Hamlin and took the lead. So far this had been the most exciting thing in the race. He pulled out to a fair lead and although Hamlin tried his hardest to catch him, he could not. Bowman went on to take the checkered flag first and did a great burnout on the track and especially on the Toyota sign in the grass. Then he stopped his Chevy on the big Toyota sign and got out of the car for his interview. After he finished his interview, he went up and got the checkered flag and gave it to a fan in the stands. They mentioned it was not a Toyota fan, and I noticed the girl had on a Logano shirt. The finishing order was: 1-Bowman, 2-Hamlin, 3- Logano. They interviewed the 2nd and 3rd place finishers and did a short recap.

Everyone in the booth and pit road gave us a lot of different information during the race. I think this was because it was basically a very boring race until the last 10+ laps. Because of this, although I still think there is bias toward Toyota and JGR in the booth, I am giving them and A- today.

Thank you for reading. Agree or disagree, your comments will be much appreciated. Stay safe!