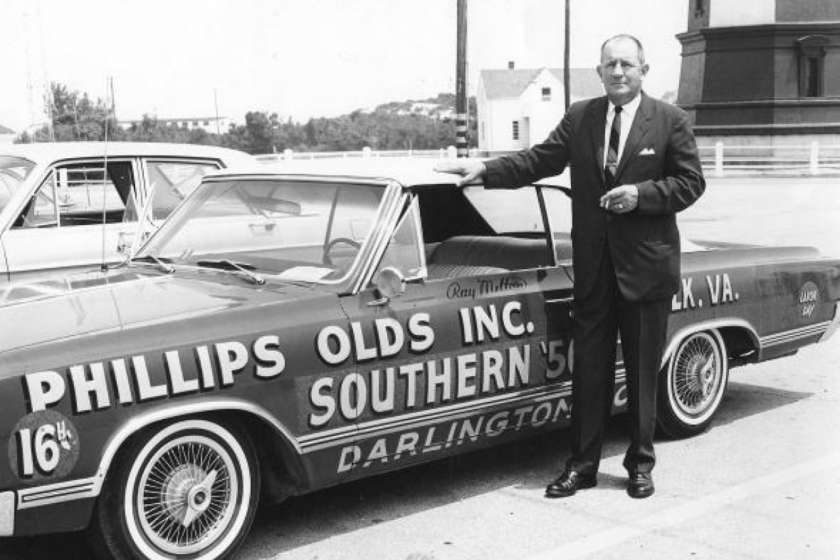 For 2022, Labor Day weekend is once again a date synonymous with “The Granddaddy of Them All” – the Southern 500 stock car race at Darlington Raceway in South Carolina. By Labor Day weekend the temperature will drop out of the nineties at night occasionally, the days will be getting shorter and the ground will be covered with heavy dewfall in early morning. These are all sure signs that the good ole boys (and gals) should be getting ready for the stock car race they all want to win.

The Southern 500 was the one race my buddy, Frank and I most wanted to see. We yearned to see it more than Daytona, more than Charlotte and more than Atlanta. It was the race we had listened to Bob Montgomery announce on radio after the strains of “Dixie” faded.

On Labor Day 1965 I was enlisted to help my Dad with the repainting of our Richmond, Virginia home. We had big extension ladders propped against the back of the house. Much to my mother’s consternation, I mounted a radio in an upstairs dormer window, cranked to full volume with the Southern 500 broadcast and listened as Ned Jarrett won. There wasn’t much said on the broadcast of the death of Buren Skeen, but a lot made of Cale flying over the guardrail in Banjo’s #27. I was so impressed with stories I read afterwards about Ned speaking to church groups about winning the Southern 500, that I incorporated that into my sermon when I was named the “Youth Week Minister” at my Southern Baptist church the following spring – 1966 – my senior year in high school.

Although one gentleman in the church congregation worked on Al Grinnan’s NASCAR modified, I guarantee I was the first (and probably the last) to preach stock car racing from the church pulpit of Monument Heights Baptist Church!

Frank and I knew we were ready for Darlington – but, our parents didn’t share our readiness. Although we were both 17 and had graduated from high school in June and would head to college right after the Southern 500, both sets of parents forbid we two 17 year olds driving from Richmond to Darlington and back on Labor Day. However, we weren’t to be stopped. We finally convinced our folks to let us take a bus to Darlington, an idea that seems pretty farfetched today, but one we thought was outstanding in 1966!

Around 8 or 9 pm on Sunday night of Labor Day weekend, my father dropped us off at the downtown Richmond Greyhound bus terminal, not a very nice place, even in 1966. We already had our Darlington race tickets and we had previously bought two round trip bus tickets to Darlington. We were the only two teenaged boys on the “Hound” and the rest of the bus was filled with folks going to Labor Day family reunions in South Carolina.

Everybody but us had fried chicken to eat on that long bus ride. We rode through the night, departing out of Richmond on Interstate 95 South, which still hadn’t been completed between Gold Rock, north of Rocky Mount, NC and Kenly, south of Wilson, NC. At Gold Rock the bus cut over to U.S. 301 and sometime after that Frank awakened me full of excitement. To our left we were passing the brightly lit, now long gone Southern 500 Truck Stop, which in the 70s I learned was in Elm City, NC and frequented by the racers after Saturday night shows at Wilson County Speedway. I hope he’ll elaborate in a response because pal Frank Buhrman recalls something like a heavy metal object rolling around in the luggage compartment making ominous thud sounds as the Greyhound rounded corners.

We still had a long ways to go, but sometime around 7:00 a.m. on Labor Day Monday that Greyhound let the two of us off at a little Pure Gas station in what I guess was downtown Darlington. It had one of those little rectangle signs you used to see at country stores, etc. that read, “Bus.” The place was closed, of course. In fact, everything was closed and we were totally lost without a clue how to get to the track.

I only remember that we walked for a long ways until we came upon a big open field with hundreds of cars and tents. There were campfires everywhere and a local church had erected a big tent and was serving breakfast to race fans. We thought we’d died and gone to heaven. My buddy Frank Buhrman remembers us eating in a building, not a tent as my fading memory first recalled. You’ll have to cut me a little slack after 56 years!

Our seats at Darlington were in the main grandstand, a place I never sat again, preferring Robert E. Lee’s Paddock on the old turn 4. The cars ran right up on the wall out of turn 4 and all we could see on the main straight that day was the roofs of the cars.

Pre-race was spectacular, much bigger than anything we’d seen at Richmond or Rockingham. The one similarity was Ray Melton bellowing on the P.A. system, God bless him. We’d never seen a drag car before and during prerace the gold Hurst Hemi Under Glass Barracuda did wheelies down the main straight. Don’t know if Linda Vaughn was riding along or not.

Then our hearts really stopped. Coming in a parade down the front stretch were all the cars on exhibit in the Joe Weatherly Stock Car Museum. There was the Johnny Mantz 1950 Plymouth, Buck Baker’s Olds, Jim Reed’s ’59 Chevy, Little Joe’s #8 Merc and the lavender #22 Ford of Fireball Roberts.

By then we were ourselves steeped in the Darlington tradition and had each purchased a “Darlington Cushion,” a seat cushion with the Southern 500 logo that we each carried like a badge of honor for years to come to races all over Virginia, Maryland, Tennessee, North Carolina and South Carolina as proof that we’d been to “The Granddaddy of Them All.” Lord, I wish I knew what happened that cushion* (See Below).

Our hero, JT Putney, had contracted to carry an onboard camera in his independent #19 Chevy that day in order to shoot footage for the annual Southern 500 promotional film. It seemed like he stopped every 20 laps to change film. I remember James Hylton in his pale yellow #48 pitted right across from us. I must have a thousand shots of him on 8mm film leaving his pit that day (or did until NASCAR lost all my film).

The big happening that day was Earl Balmer getting up on the fence in Turn 1. His K&K Dodge chopped off the tops of the guardrail posts and threw them into the open air press box like so many wood chips. The race was stopped for an eternity while the guardrail was rebuilt.

In the closing stages, Richard Petty cut down a tire and gave up the lead to Darel Dieringer who was flagged the winner in his Bud Moore #16 Mercury Comet.

When we left the track it started raining. We tried to thumb a ride back into Darlington and the closed bus station. We did both get hit in the head with rolls of wet toilet tissue tossed by drunks in a passing pickup. Frank remembers (and I do not) a fellow picking us up who took evasive action each time he saw anyone resembling a law enforcement officer. Sometime that evening, the bus en route to Richmond picked us up at the little closed Darlington bus station. My dad met us in the wee hours. We had survived our first Southern 500 and there would be many more Labor Day Monday adventures. But that was the first and last time we rode the “Hound” to Darlington!

* Note From Frank Buhrman: How this survived 56 years I have no idea. It either made it through half a dozen moves in our household, or spent decades in my parents’ house and was recovered sometime over the last 15-20 years. Either way, I’m sure it will be one of the first things to get pitched once I’m no longer around to say, “But I can’t let that go.”