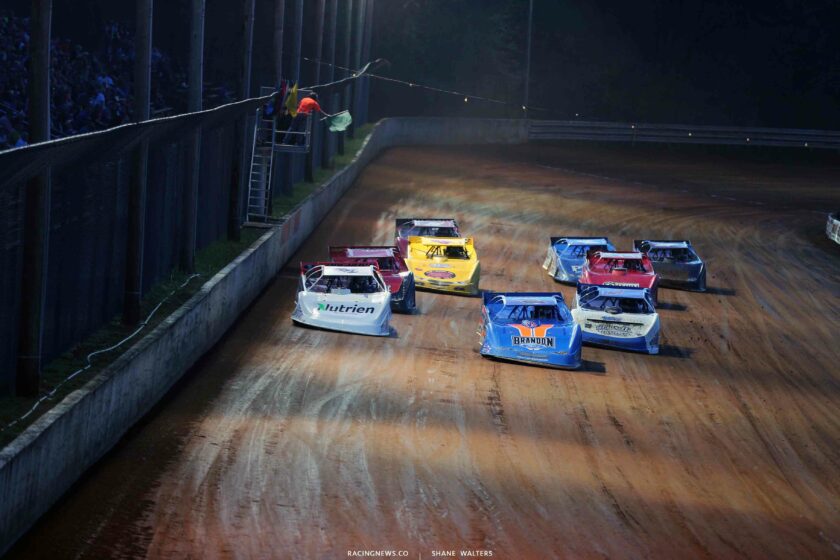 (The author is meandering through a life of race-fandom, while he still remembers at least some of it.)

EDITOR’S NOTE: The “cover photo” was chosen to illustrate that weekly short track racing today actually looks more like the NASCAR I came to love 60 years ago than the NASCAR of today. There’s a message in there. (Part 5 of the Six Decades Fan series, if you missed any part, click here.)

On February 28, 2016, I walked out of fulltime employment for the last time. At some point not long afterwards, I probably asked myself, “How is this going to affect my life as a race fan?”

Seven racing seasons later, I guess I get to say, “Quite a bit.”

One big change had already begun. When my race weekend employment at Richmond (International) Raceway ended a couple of years earlier, it accelerated the separation of my racing soul from NASCAR. I had already cut my in-person attendance to those two Cup weekends I worked, but now the television viewing began to drop. A few years later, we decided to “cut the cord” on television, so unless I went to a bar on race day, I was listening at best. Today, I generally follow races on NASCAR.com’s “live leaderboard,” sometimes also with the streaming version of MRN – NASCAR’s fall from “the next big thing” popularity status long ago removed any nearby broadcast station from my options.

To be honest, I still miss being more involved, but only occasionally, and less and less each year. It’s just not the sport I loved decades ago.

Instead, the world of weekly short track racing filled the empty space nicely, and a couple of specific activities defined most of my race-fan life.

Those activities are “track chasing” and the Pennsylvania Sprint Series.

The former, simply, is visiting as many different race tracks as possible, and to that end, I’m down at the bottom of the barrel. Fellow Pennsylvanian Guy Smith has been to more than 1,900 different tracks, including a good number on other continents. My total stands at 116.

Nevertheless, that total has grown more over the past few years, as illustrated by 50 of those tracks being located in Pennsylvania.

Nearly 20 years ago, I had started heading out to distant tracks “just because,” and after the first couple of those trips, longtime buddy Tom asked if he could join me. We continued that annual trip for about 12 years and more than 20 new tracks, including my 100th. It lives on today as visits to live music venues.

When I retired, I began to add solo outings to new tracks in addition to the “boys” trips with Tom. The last two years I’ve plotted reasonably ambitious schedules, only to lose more than half my planned new tracks to weather or various other conflicts (everything from COVID to a track not opening).

I’ve cut back on how far I’m willing to drive home after a race, so more and more trips are overnighters, and I’m getting pretty good at finding decent Mom & Pop motels. Still, I hope to be able to keep this routine up for at least another couple of years.

Maybe I’ll even find another Lizard Creek Speedway. That maybe was the “chasing” favorite. Located on a former strip mine (also described as “where the FEMA trailers used to be”) outside of tiny Hanover, W.Va., Lizard Creek (founded as Hatfield & McCoy Speedway) featured a FEMA trailer as its concession stand, a couple of stacked storage units as the track office and control tower, really friendly people, and not many cars – barely two dozen the night we were there for a five-division show. A field of six crate late models (with one dropping out early) managed to raise more dust than a full field at most tracks, so goggles were a must.

There is no population center anywhere near Hanover, W.Va. Beckley is over an hour away. It’s no wonder the track has been closed about as much as it’s been open since it was built. Last year it was announced as reopening under the Hatfield McCoy name, but apparently it never did. But it still shows that people like this sport enough to try and keep it alive, despite the odds. On that note, I’m with the Lizard Creek fans.

One reason I haven’t been to more new tracks is that I keep going back to existing tracks, thanks to my volunteer work as writer/photographer/historian for the PA Sprint Series, one of around 15 regional series racing under the national RaceSaver economy sprint rules package, sanctioned by IMCA.

That has made me a semi-regular at Port Royal, Selinsgrove, and Path Valley Speedways, and an occasional visitor to Williams Grove, Lincoln, BAPS, Bloomsburg, Hagerstown, Clinton County, Hesston, and elsewhere.

It has become my primary retirement activity: I ended up going to about 30 races this season (down half a dozen or so from 2021), and two-thirds of them were for PASS.

I love this kind of racing. The drivers are racing because they love it. You could win every race PASS has run this year and take home less than $15,000. But you won’t spend as much, either. A new engine for a PASS/IMCA/RaceSaver sprinter will set you back about $10,000; an engine for a 410 sprint car (think World of Outlaws sprints or the local equivalent) will cost six times that much, and that larger amount won’t come close to paying one vice president’s expenses in NASCAR.

Some of the drivers are young, maybe planning to move to something more high-visibility. Some are older, having tried those high-visibility worlds and decided to return to affordable and fun. Some have just found their niche here: as of next year, nine will have been in the series for 20 years or more.

Drivers still get mad at each other after wrecks, and social media trolls still elevate themselves to perfection and characterize everyone else as idiots, but I can’t think of any place I’d rather be.

The racing is great. Three years ago, “Nitro Nick” Sweigart went from third to first in the second turn of the last lap to win the season-ending Keystone RaceSaver Challenge race, and the next season at BAPS Motor Speedway, Doug Dodson, who had already won a make-up feature that night, pulled off an impossible front-stretch pass at the white flag to make it two-for-two.

I’ve seen teenagers’ families go crazy when the new kid behind the wheel got his first podium finish, and I was privileged to see “Cowboy Jim” Kennedy in competition a few weeks after turning 88 years old.

I’ve watched Garrett Bard from the big city of Wells Tannery, from his first start in mid-2019, as he rewrote the PASS record book. No one in series history (since 1999) had won consecutive championships; he has won three straight. His 33 victories (in only 98 races) is the highest career total, and his 12 wins this year tied the single-season record. He really wanted to win the season-ending race to set a new mark there, too, but he finished second.

t’s a family racing team on a limited budget, and that’s what makes it all so special.

But the drivers who are lucky to claim an occasional top 10 are just as dedicated and just as nice. It’s a privilege to be in the midst of them all. The same can be said of my fellow volunteers – nobody gets paid to be part of this group (unless you count pit passes and the occasional t-shirt), but you won’t find any more dedication among the NASCAR elite with six-figure salaries.

That’s why the PA Sprint Series is where this race fan belongs.

I do think about how long this will last. Jim Kennedy may still be racing at 88, but when I talked with him recently, he had just come inside from chopping wood, and I’ve already given that up, so I don’t know if my activity curve will hold up like his.

My master plan for 2023 may be a bit less ambitious, but I still plan to have one. Beyond that, who knows. The body complains more and more, but the soul still wants and needs this stuff.

In fact, there’s a race for scale cars called “Slingshots” this weekend at an obscure track that only races a couple of times a year – I’ve never been there. It’s nearly two-and-a-half hours away, but I know a cheap motel nearby. What do you think?