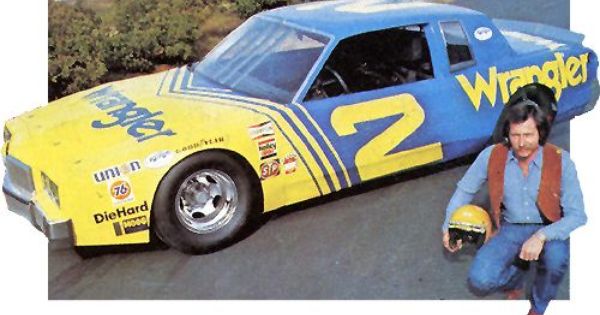 Between the Thanksgiving holiday and Christmas, there is a now 39-year old racing memory that always comes to my mind yearly and the minds of my wife and two grown daughters.

Most of us realize that it takes tons of folks to stage NASCAR events and most of them are unsung personnel, such as shop personnel, racetrack personnel, NASCAR personnel, media, PR, marketing, sponsors, manufacturers, equipment suppliers and on and on. It takes more than a racecar driver, car owner and track promoter to stage a race event. There’s a group of folks constantly on the road spreading the word and logging more miles than any racecar driver or transporter driver and spending more hours on the job than any shop employee.

I’d like to salute all those show car drivers and the goodwill they create. Today there must be a gazillion show cars out there, many managed by big marketing firms. But, there was a time when there weren’t many. I don’t know if that Winston #1 car originally driven by T. Wayne Robertson was the first, but it went a lot of places.

When we started our Dale Earnhardt – Wrangler Racing program in 1980, the only other show cars I remember besides the Winston car were a Gatorade car and a Busch beer car. We immediately determined that a show car visiting retailers, shopping centers, racetracks and special events would be an integral part of our Wrangler Racing marketing program.

Our family has very, very special and fond memories of my first Wrangler show car driver, a wonderful “kid” named Ricky Parham who worked for me for 3 racing seasons – 1981-1983. He was age 24 when I hired him. Ricky would succumb to injuries suffered in a heart wrenching accident on Thanksgiving Day, 1983.

The car changed to the #3 Richard Childress Pontiac show car in August 1981 and in 1982-1983 both “old” style and new style #15 Bud Moore Ford T-birds pulled by a Ford van. Ricky’s home was Oxford, NC, north of Durham. Oxford was and is famous for the potent high school football teams fielded by the Oxford Orphanage. Anyway, Oxford was Ricky’s home base for us. His family owned and operated a rural trash collection business there.

Ricky and most other show car drivers earned their pay with long hours, lots of miles and being a representative of our company to race fans and potential race fans. There were lots of interesting happenings along the way. In 1981, Wrangler had a very unique copyrighted blue and yellow chevron paint scheme on the Wrangler/ Dale Earnhardt car. When we arrived at Talladega in May 1981 for the Winston 500, we found that the Harry Ranier / Bobby Allison / Hardee’s team had copied our copyrighted paint scheme (albeit in orange and white) right down to the last little line on the chevron. We promptly sued and they were forced to change that scheme.

However, they had a Hardee’s show car there at the Winston 500 and they wanted to put it in the prerace parade lap. I’ll never forget Winston’s T. Wayne Robertson telling them there was only room for two show cars and they’d have to draw straws. T. Wayne made sure neither the Winston car nor Ricky’s Wrangler show car got the short straw. That was reserved for the Hardee’s car, which was returned to the garage and parked prior to the Talladega prerace parade.

Ricky worked for me throughout the 1981, 1982 and 1983 seasons, making thousands of friends along the way with his bubbly personality and attention to detail. As we approached the end of 1983, Ricky asked if he could have a few days off at Thanksgiving to visit his family at their farm in Oxford, NC, which he did.

My family and I were out of town that Thanksgiving weekend in eastern North Carolina visiting my wife’s family in Wilson. When we returned late Sunday night to our Greensboro home, I had a phone call from my former Wrangler Racing assistant program manager, Bob Janelle.

He told me Ricky had been in a terrible accident. After Thanksgiving dinner on his family’s farm outside Oxford, Ricky and his dad went riding through the woods on their trail bikes. Ricky’s dad decided to return to the house, but when Ricky didn’t return after a while, his dad went back out on his bike to look for him. A hunter found them both on the wooded trail where they had collided head-on in a curve.

They were both transported unconscious to Duke Medical Center in Durham, NC. Ricky’s dad didn’t make it long. Immediately following his father’s funeral, Ricky’s mother, Ruby Parham returned to Duke Medical Center and made the heart wrenching decision to remove her son, Ricky from life support. I was at the hospital and remember being unable to speak to Winston’s Wes Beroth for the tears choking us both when we were told of the decision.

The day they buried Ricky from rural Hester Baptist Church just outside Oxford, NC, with the pre-Civil War cemetery beside it, they had to put loudspeakers up in the parking lot. A casual NASCAR fan passing a half mile away on I-85 would never have imagined how many NASCAR drivers, sponsors and track personnel were packed inside that country church. They had come from all over the racing circuit to pay respects to a super good guy, gone too soon at age 27.

It only got sadder from there. Ricky had a room at the Oxford Holiday Inn and we had to get Wrangler stuff from it, as well as get the show car rig and car back to Greensboro. I also had to immediately hire another show car driver and I was fortunate to find Chip Warren, a former Cup flagman who many of you will remember waving the green flag on the 1979 Daytona 500 and later as the NASCAR Busch Series official holding the red and green stop/go paddles at the end of pit road. When I moved to Dallas at the beginning of the 1984 racing season to manage the 7-Eleven program, I was later able to hire Chip to tow our Kyle Petty show car beginning in 1985.

While living in Dallas, the Cabbage Patch doll craze began.  You may or may not remember it, depending on your age. If you combine the pandemonium of the hunt for newly introduced I-Phones, Wiis, Xboxes, Air Jordans and Beanie Babies, you’ll have a shadow of a notion of what it was like to obtain a Cabbage Patch Kid doll.

We couldn’t find any for our two daughters in Dallas or in my home city of Richmond or my wife’s home in Wilson. However, dear Mrs. Parham, my late show car driver, Ricky’s mother, found two Cabbage Patch Kid dolls in Raleigh, NC and shipped them to us in Dallas.

For many years when we’d visit my wife’s family in Wilson, NC and mine in Richmond, VA, we’d stop (especially my wife and daughters) to pay our respects to the mother (who passed in 2010) of my first show car driver, one of those unsung racing folks who make it all go around.

Every year in late fall, when I hear that the Oxford Orphanage team has advanced in the North Carolina state high school football playoffs, my thoughts turn back to the 80s and my wonderful show car drivers.

In my humble opinion, those hardworking folks who’ve pulled the show cars, set up the displays, let you touch a real race car and answered your questions through the years have never received the recognition due them. I salute them one and all and appreciate you letting me share my memories of some very special people.