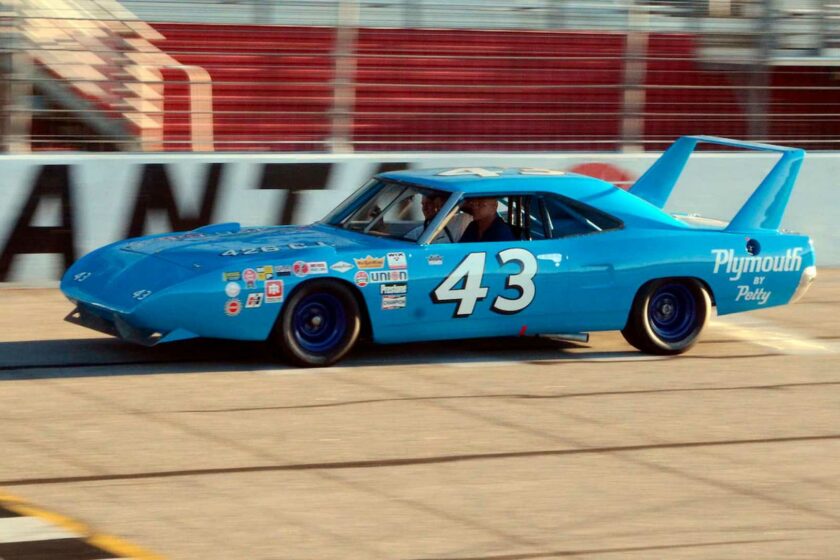 By the time you folks get to read this, the 2022 Atlanta 400-mile race will be coming up as is Daytona in late August. I just happened to be thinking today (and yes I am capable of thought from time to time) of all the good times I had at the Atlanta Raceway. The story I am about to tell is true and there are no names changed as you all know I did it.

In 1970, all we Petty fans in our circle of race fanatics, were always pumped because to our eyes, there was nothing like that Petty Blue Superbird with those 43s emblazoned on it. We had been to Daytona to watch Pete Hamilton win in his Petty Superbird and at Talladega where he did it again. The Superbird was the car for the super speedways so in order to watch their power and grace, to the super speedways we must go.

We had been at Atlanta in March when the two Petty Superbirds finished in the top five and we were anxious to return. All of us loved the Atlanta Raceway back then for its short straights and long, sweeping high banked turns. There was something special about watching those cars sweep around those turns, most times in close competition with each other. I miss that track. Today’s configuration doesn’t do that much to thrill me but in 1970, it was a different story.

The race was set for August 2, 1970, but we heard the talk that it may not happen because of deep financial problems with the speedway. But we believed and we planned our trip. Now to be fair, our group planning a trip consisted of determining what time we would leave in the morning of race day, what we would pack in the ice chest, and how much gas money it would take. There was no such attention to detail as was the D-Day invasion, but we got the job done.

On the Sunday morning of the race, my brother Richard, Cousin Eddie, friend Tommy and myself climbed into my 1969 electric blue Road Runner with the broad flat black stripes on the hood, and headed West down I-20. At the time, I-20 was not complete all the way to Atlanta, but there were many adventures to be discovered on the rural highways taken to complete the trip. Not the least of these adventures were the couple of little towns known as “speed traps”. We were aware of those.

We were following the posted speed limit in one such little burg, the name I can’t recall, not long after the sun had come up to fill the back window of that Road Runner. I knew to slow down, and I did, to just below the speed limit. As we were exiting the town, the bushes on the side of the road exploded as the Georgia local city cop flew up behind us, blue lights ablaze. All four of us in the car were ready to take on this enforcer of the law, not that we would be belligerent, but because we had done nothing wrong.

My driver’s window was already down as it was a warm August morning. The cop walked up to the window and instead of asking for license and registration, he asked if he could look under the hood. What was I to say to that? I exited the car and raised the hood for inspection. After a couple of minutes, the officer said “thanks” and slammed the hood closed and replaced the hood pins (you know the kind race cars had back then). He told us to be on our merry way, he had just wanted to see the engine in the car that was disturbing the silence of a country Georgia morning. Guess it took me a few miles to get my heart to slow down.

We made the raceway about 10:30 and entered through the tunnel under turn one and found our usual parking spot. In those days, the center of the infield was sort of an indention in the ground where once parked you could see all the way around the track. We jumped out and headed to the pit fence. Richard saw us and got down off the truck and came over to speak, as he always seemed to do. We talked about the race and he was confident so we were too.

When the cars hit the track for the parade laps, as always, my body tingled with excitement as the race was about to get underway. I noticed there were very few people in the grandstands and very few in the infield. I immediately thought of having an easy out after the race, as traffic would be minimal. I didn’t realize at the time how easy that out would be, but I’m getting ahead of myself here.

To shorten up this novel, I will tell you that we all exhausted ourselves cheering that day as Richard put a whipping on the field. Richard seemed to always be leading, although there was a noteworthy appearance at the front from time to time by Cale Yarborough. When the checkered flag was waved (the black and white one, no green and white) Richard had more than a lap on Cale ( Race Results – Racing-Reference ). We took off running to the pits and as they opened the pit gate to infield fans, we were the first through to head to the Victory Lane. We celebrated on the outside of the fence because our usual sneak in the place wouldn’t work with the amount of Georgia Law Enforcement on the scene, but we celebrated just as hard. When they escorted Richard to the car to take him to the press box, we followed along and got up into the stands at the foot of the stairs to the white structure where Richard was meeting the press.

By the time Richard was finished and was coming down the stairs, we were about the only fans left on the premises. As we walked across the track with Richard and into the pits where his truck waited, we talked excitedly about the fact that the cars would race at our local Columbia Speedway the coming Thursday night. As Richard got ready to leave, he says “See you guys Thursday” and all four of us responded in unison “you can count on it”.

So the four happy young guys departed the pits and headed into the deserted infield, deserted that is, with the exception of one Electric Blue Road Runner and about 15 Sheriff and Highway Patrol cars. They had us surrounded and several officers were standing outside waiting on us. I don’t recall being nervous, but I do recall wondering how I was going to explain whatever it was I had done to my mother.

A highway patrolman, the size of a Yeti (not the cooler, the real Yeti) asked the four of us whose car this was. As funny as it seems now, I actually raised my hand, as if in school. The Yeti looked at me and said “get it out of here NOW!”

As we got in the car and started it up, two patrol cars were in front of us, and two or three on each side as well as a couple in back. That escort led us out the back gate and dispatched us on a Georgia road that was probably used by Rhett Butler and Scarlett O’Hara when they fled Atlanta. They turned us loose when we got there and we were on our own.

We got out our road map to see what turns we needed to make and we couldn’t even find a highway number on this wagon trail to determine where we were. I don’t remember the highway number but it was a stroke of good fortune for future Atlanta trips to discover this road took us near Conyers, Georgia and dumped us right on I-20. We used that road every Atlanta race because it saved hours over the usual through Atlanta route. Unfortunately I didn’t get Yeti’s proper name, but if he ever stumbles upon this little story, thanks for your help you didn’t know you were giving.

Once we were on our merry way home, we had to laugh at all of the events of the day. We had seem our man absolutely destroy the field; we talked with him afterwards, and we had enjoyed TWO encounters with Georgia Law Enforcement, neither of which resulted in a ticket or an arrest. Sometimes it pays to be innocent, I guess. We did figure out though, that those cops were tired after their long day at the track and our being in the infield was holding them up from going home. So, Mr. Yeti, for that we apologize. We truly do respect law enforcement.

What I have just relayed is a memory I treasure, as I do so many of my visits to Atlanta International Raceway/Motor Speedway. I have not returned since the track was changed so I can’t speak to races there other than what I see on TV. I do know the memories of the old track hold my heart hostage as that was quite a race track back then. I loved the races there. I know some will wonder how I missed going to the last race Richard Petty ran in his career in November, 1992. The best way I can explain that is to say I was at the first race Richard ran in 1958, and hundreds of races he competed in throughout his career. I thought about going but then I thought that would be like putting the last chapter in a book I wasn’t ready to finish writing yet. As I watched on television, thoughts of many of those Atlanta races rolled through my mind, especially the ones Richard won there.

I hope the race that will be run Sunday (and will already be history by the time you folks are reading this) will be a safe race and the winner will be the guy with the fastest car who drove the best and blocked the least.

Thanks for reading and thanks for allowing me to ramble through the pages of my aged mind.