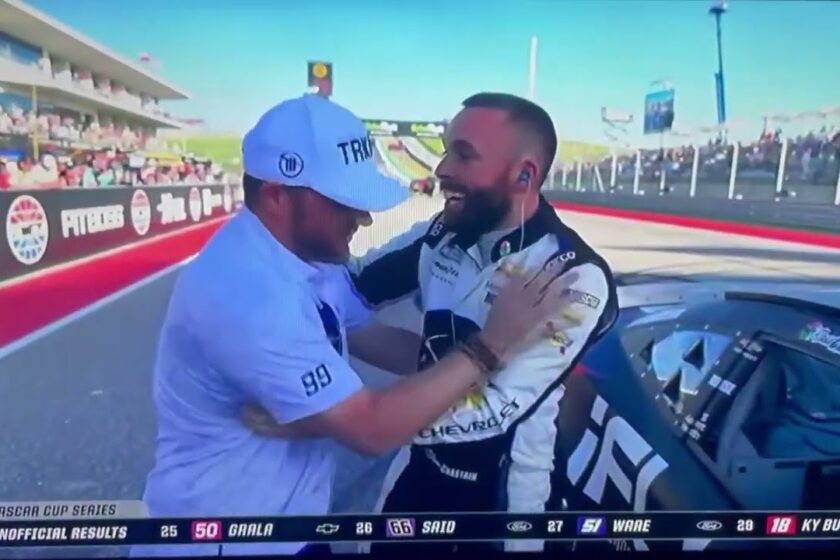 This week, it was back across the mighty Mississip to see 39 Cup drivers try their NEXT GEN hand on the 3.14 mile, 20-turn F1 road course known as the Circuit of the Americas.

It took an overtime and a Turn 15 carom shot that sent A. J. Allmendinger bouncing off Alex Bowman to clear the way for Ross Chastain to notch his first Cup Victory and get the first for Trackhouse Racing.

Trackhouse was the team of the weekend as Chastain’s teammate, Daniel Suarez was fast out of the trailer and found himself outside Pole. He grabbed the lead at the drop of the Green and led the entire first Stage. A cut tire at the start of Stage Two and late race power steering issues thwarted his chances for the win.

Chastain picked up where Suarez left off to dominate the final Stage for the win. He led a total of 4 times for 31 laps, the most for the race. Teammate Suarez was next closest with his 15 lap domination of Stage One.

Next closest was Austin Cindric leading one time for 11 laps.

The Trackhouse combination of Chastain and Suarez led 46 laps or 66.7% of Sunday’s race. I think it’s safe to say that Justin Marks and company have quickly grown quite fond of the Austin, TX road course.

With the overtime, the race went for 69 laps. It was slowed nine times for 13 laps, which included one caution for fluid on track, two for debris, three for cars stopped on track or stuck off track and one multi-car incident, in addition to the Stage Breaks.

During the 56 Green Flag laps there was a total of 2599 Green Flag Passes recorded. 598 of those passes occurred in positions 1-15 making them Quality Passes with 30 of those for P1.

This breakdown indicates that 23.0% of the Green Flag Passes occurred in the top 38.5% of the field. This differential points to the bulk of the passing taking place in the middle to back of the field.

It was all about Starts and Restarts

Those COTA restarts rival those at Phoenix and Pocono as the field spreads to five and six wide before trying to sort things out exiting Turn One. The nine Cautions along with the Race Start gave the field 10 opportunities to show their skills in navigating through the chaos created by the hard left-hander at the top of the hill.

Daniel Suarez took the Lead before the end of Lap 1. Chastain took the lead from Joey Logano at the start of Stage Three, beat the Leader to the Flag on the Lap 43 restart and again on the restart at Lap 47. Allmendinger beat the leader to the green to be scored the leader of Lap 65 and Tyler Reddick slipped in to get his Lead Change at Lap 66. Chastain took the lead on the Lap 68 restart and was the leader on the lap that counted most and led to a watermelon-busting celebration.

So all in all, if there was going to be a lead change scored, it happened coming to the restart or the first lap after the restart.

Denny Hamlin used pit strategy to take the lead from Austin Cindric when he pitted on Lap 28 to win Stage Two.

Chase Briscoe had the only Racing Lead Change when he passed Ross Chastain on Lap 45, the second lap after a Restart.

Other Green Flag Lead Changes were a result of Pit sequence or pit position in relationship to the Start/Finish line.

Bottom Line-When it came to Green Flag Lead Changes, if it didn’t occur in the first lap of the restart it just wasn’t going to happen (with the exception of Chase Briscoe).

What about that finish? You can’t get any better than that!

The finish was exciting but once again it was another two lap shootout. Six races into the season and five finished with Green Flag Runs of four laps or less. If every race is a shootout with the field tightly packed, chances are it will be exciting.

The NASCAR stats show that Ross Chastain led the final two laps of the race-even though it was a three car battle and A. J. Allmendinger and Alex Bowman each exchanged the lead several times among themselves before Chastain settled it at Turn 15 on the last lap.

Depending on where the scoring loops were set up on COTA those may have figured into the 30 Green Flag Passes For Lead, but only Chastain was out front where Lead Changes are registered-at the Start/Finish Line.

This is just an example of why you can’t rely on one stat to give you a complete picture of the race.

Stages One and Two were the shorter of the Stages and ran caution free. They also had no passing for the lead. Suarez led every lap of Stage One. Denny Hamlin used pit strategy to assume the lead when Cindric pitted to win Stage Two.

Hardly action at the front.

Stage Three restarted on Lap 33 and the final 36 laps was punctuated by seven cautions. This created Green Flag runs of 2, 6, 2, 8, 2, 4, 1, 2 laps. This loaded the racing toward restarts with only Briscoe’s solitary Racing Lead Change being the exception.

The numerous short runs kept the action up. Couple that with off track excursions or spins by Joey Hand, Ty Dillon, Kaz Grala, Austin Cindric (2), Aric Almirola, Denny Hamlin, Cole Custer and Kyle Busch that didn’t result in cautions and a Bubba Wallace lose wheel, there was plenty of action when it wasn’t racing up front.

Besides the wild restarts what other similarities does COTA and Phoenix share? Each had one Racing Lead Change for their entire race. Here is a breakdown of RCLs for the season

COTA is a road course race and raced like it. Passing up front was heavily restart dependent. Once the cars get strung out it takes a mistake or misjudgment by the leader for second to threaten or make the pass. Sunday, Chastain had earned a sizable lead in that final restart but was over cautious entering Turn 11 allowing Allmendinger and Bowman back into the mix.

That created the exciting finish.

The main difference between this track and other road course races is there is more “back and forth” between drivers competing for the lead as shown in the relatively high number of Green Flag Passes For Lead vs Green Flag Lead Changes (30:9). At Watkins Glen and the Charlotte ROVAL a GFPFL almost always results in a GFLC.

In the final lap and coming for the win there were four different leaders through four turns. Whether they all got counted as GFPFLs depends on the scoring loops and their placement. But that’s what the fans saw as Chastain led going into that exchange and retook the lead when it was over to win his first Cup race by 1.331 seconds.

Overall, the NEXT GEN performed as anticipated. It borrows heavily from other road racing series and it showed. Once again it displayed its durability as the race had numerous body slams, most of which allowed cars to continue on without cutting down tires. During qualifying, Ryan Blaney put his in the Soft Barriers and still went on to capture the Pole.

Again, cars were able to continue with flats, which hasn’t always been the case. Driver comfort from the Texas heat seemed to be handled by the “mail slot” windshield vent and other accessories as complaints didn’t seem to rear its head this week.

Power steering issues and the loose wheel bug bit again. Hopefully, that will be straightened out in the coming week(s). We also saw that they can hold gravel… lots of gravel.

NASCAR checked off a few more NEXT GEN boxes Sunday. Now it’s off to Richmond, the first points-paying short track race to see if some more boxes can be checked off.

Tune in and let’s find out.

Thunder on… and Stay Safe!