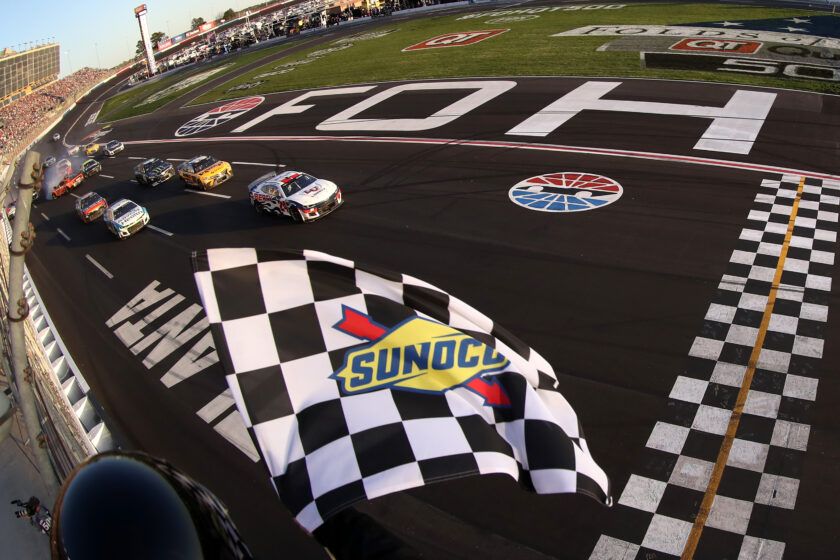 Note: My articles are based solely on my thoughts and observations. Normally I do not offer statistics, although at times I may reference what different broadcasters, among others, have said or alluded to.

Hotlanta, as so many fans of yesteryear used to call AMS when NASCAR would head there to race, I always think of the year Bill Elliott won the race and Alan Kulwicki won the championship.

The track has now had a face lift. You could feel the excitement and the stands were always full back then. Today, as I looked at the stands, they did not seem as full. Once upon a time, one could never get tickets for the race unless you ordered a year in advance or found a scalper. Today, Mike Joy said there was a big surge in ticket sales last night for the race. Even so, the stands were still not full. I wondered if it was because of Covid, cost of fuel/gasoline or simply because NASCAR has lost its appeal to today’s casual fan.

They told us the racing was supposed to be more like Daytona and Talladega. It was a wait and see game as the trucks and Xfinity did not show much of that type of racing. The track has been reconfigured and has new pavement. I believe they said that the track narrows down to two lanes in the corners. It has an out of bounds line with same rules as Daytona and ‘dega. The banking has also been raised and is 4 degrees steeper. The track looked good!

I really enjoyed pre race ceremonies of Nations Colors, invocation, our National Anthem by the brass band and the flyover.

Ryan Blaney and Chase Briscoe were on the front row. I really like both and kept track of them the whole race. We were told William Bryon’s car was a super speedway car with an intermediate setup. Very interesting as he had good speed and the car seemed to handle well. He even used the slingshot maneuver when he passed Chastain.

When they talked about Kurt Busch, Mike Joy said Kurt was in Indy Saturday night and called the Supercross race. As a very loyal Supercross fan, I was watching that race, and yes, Kurt was there. He was a guest and did make some remarks, but he did not “call” the race. There, I feel better now…

Chastain got into the wall with eleven laps to go in Stage One. Mike told us after the caution that he had been penalized 2 laps for improper fueling, but offered no definition as to what improper fueling is. Do any of you know what it is?

I will not be talking about all the cautions due to incidents on the track because it will make this article too long. That being said, the racing was good and the competition seemed to be fairly comparable and decent. I enjoyed the racing and the anticipation of watching certain drivers gain even just 1 spot and sometimes up to double digit spots.

With 100 laps to go, it seemed the winner was going to be someone unexpected, just like Daytona and ‘dega usually are. In other words, a crapshoot. Personally, I had chosen Chase Elliott to win, but I was really hoping Ryan Blaney would win.

We were told there were more cars out of this race than there had been at an Atlanta race in 16 years. They also told us there were over 46 lead changes, but I am sure David Nance will have more detailed information on that when he does his article. ( Click Here )

William Bryon won this race. It was a good win and I am happy for him. I feel all the younger racers winning this year is a good thing. NASCAR can have a good future, if they so choose.

Thank you for reading and commenting here. Your thoughts, ideas on the subject and opinions are very welcome. I remind you to keep them clean and no bashing, please.