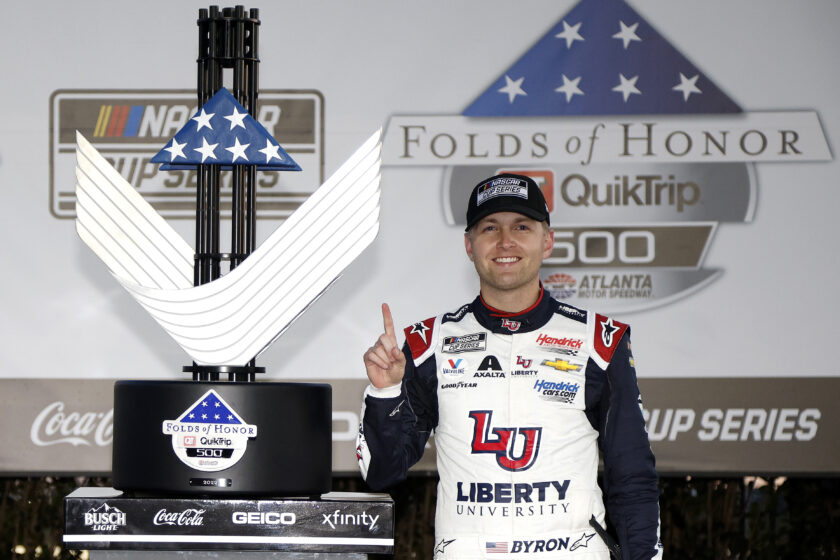 On Sunday, the newly resurfaced and reconfigured 1.5 mile Atlanta Motor Speedway hosted the Folds of Honor 500. With it’s new high banks that rivaled the other Superspeedways drivers and fans alike were not exactly sure what type of racing it was going to produce.

Would it be the the single groove, hug the bottom line Atlanta of old or side by side pack racing like we saw at Daytona? Would it race like Vegas-the other 1.5 miler we’ve been to or produce something completely brand new? Let’s look at the numbers and see what they say.

NASCAR’s tried and true metric of Green Flag Passes points to Atlanta racing like a superspeedway as it produced 6429 vs Daytona’s 6462 vs Las Vegas’ 3271. No other race this season produced those kind of numbers that rival the 500. Because of the difference in green flag laps it brought the percentage of Green Flag Passes per Green Flag Lap down to 24.8 to Daytona’s 39.4.  By comparison, Vegas’ had a 15.3 percentage

So Atlanta is not quite Superspeedway numbers, but is closer to Daytona than any other track to date. Since one number doesn’t paint a complete picture, let’s see if there is anything else noteworthy.

Where was the racing?

46 Lead Changes. 46! This is the main number touted after Sunday’s race. That is not only a record for Atlanta but was the most Lead Changes to date. It doubled Vegas’ 23 and left Daytona’s 35 in the dust. So looking at this metric you could say that Atlanta raced better than a superspeedway.

But if you have read some of our previous stories on race stats you know we don’t leave it at that but dig a little deeper to see what the numbers show.

So once again, maybe Atlanta raced better than a Superspeedway.

Ten of the 37 Green Flag Lead Changes occurred during the first three laps after the green flag dropped to start or restart the race. This was more than Daytona and Vegas combined as we saw 4 at Daytona and 5 at Las Vegas. Phoenix, which is known for its wild restarts, in comparison only had 2 Lead Charges during restarts.

Eight of the 12 Runs had Lead Changes further indicating action on restarts.

We saw a new type of Lead Change-Leader Wrecked

Three times we saw the lead change under green when the right rear tire failed, sending the leader into the wall. William Byron (2) and Ryan Blaney found themselves in the lead after leaders Ross Chastain, Tyler Reddick and Ricky Stenhouse, Jr. had their right rear Goodyears let go. Their misfortune resulted in Green Flag Lead Changes for these lucky recipients.

Goodyear is looking into the matter, but so far this occurrence was something uniquely Atlanta, not seen at either Daytona or Vegas.

Like a Superspeedway, Atlanta had its own “Big One”

Tyler Reddick’s tire failure at the front of the field triggered a multi-car incident that rivals Daytona. 13 cars were involved in that melee. This year’s Daytona largest incident involved eight cars, while Vegas’ largest involved four.

So when it came to wrecks, Atlanta definitely had a Superspeedway feel to it.

Racing Lead Changes is one of the main statistics we have followed. These are Green Flag Lead Changes that happens after the three lap Restart window where one car passes the leader to take the lead. You race past me.

This happened 24 times in the race Sunday-the most for the young season. To put this into perspective here is the following Racing Lead Change ranking by race-

To further put the Atlanta race into perspective-

No Matter How You Cut It, Atlanta Had Lots of Leaders

NASCAR reported Atlanta had a total of 20 different leaders for the race. The was the most for the season, exceeding Las Vegas (15) and Daytona (13). William Byron led the pack, finding the front eight times for a total of 111 laps.

But those lead changes include cautions, restarts and other means of getting to the front.

Overall, it’s a pretty diverse group. When you consider these are the leaders who raced to the front, the distribution is a bit surprising with several drivers you would normally expect at the top are barely in the field.

Green Flag Passes For Lead is a NASCAR stat that counts the Green Flag Lead Changes at the various scoring loops around the track. A car can take the lead. And hold it to a scoring loop to get counted as a GFPFL and not hold it to the Start/Finish line where it would be counted as a Lead Change. This number is an indicator of the “back and forth” at the front.

There was a total of 141 Green Flag Passes For Lead. When you consider 37 of those were held for Green Flag lead change it means there was 104 Times when the driver who had the lead at a scoring loop was not able to sustain it for a Lead Change. That’s a lot of “back and forth”.

By comparison Las Vegas had 57. Daytona… well, NASCAR didn’t report the number for that race. I think by this metric Atlanta raced more like a Superspeedway on Sunday.

So does the newly resurfaced and reconfigured Atlanta race more like a mile and a half or more like a Superspeedway? I think what we saw Sunday with the side by side packs it looked more like the latter. The bulk of the stats we looked at support that as well.

However, several stats, including Racing Lead Changes also point to a race uniquely Atlanta. I for one hope they keep it that way.

Was Sunday’s race a product of the new car, new surface, new configuration, new tire or new Horsepower/Aero package for this track or a combination of them all? The package is getting little attention but suspect that played as big a role in the product we saw as anything.

They used the Daytona package. They got Daytona-style racing.

With as many variables to determine the major factor would be difficult. Only time will tell.

How will the car do at COTA? We leave the ovals for the first road race with a car that has been described as a road racing car. Hopefully, it will make for a good combination.

At least the track should be dry and that will be a heck of an improvement over 2021!