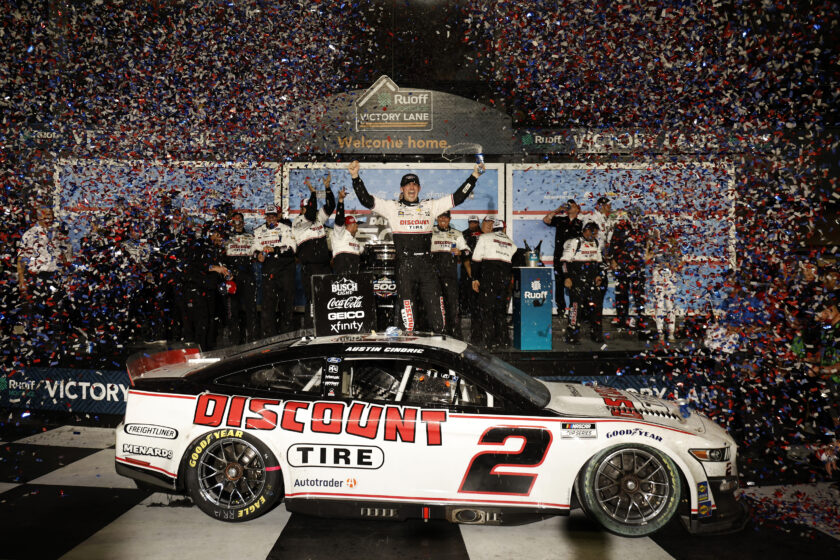 After Bubba Wallace’s first win last season in the fifth race of the 2021 Playoffs the question was asked-Who Will Be #200?

Now with his win at the 2022 Daytona 500, Austin Cindric becomes the 199th Cup winner. Cindric, who in his last race of last season came within a few feet of being back-to-back Xfinity Series champion, won his next race out-the biggest race in Cup. So now it’s time to ask again-Who will be #200?

With this win, Cindric finds himself in a 65-way tie with other one time Cup winners. Before you let that high number diminish the accomplishment, look at the company he joins-

Now, it’s off on the Western Swing.

Will #200 come before the Traveling Circus crosses back across the Mississippi River?

With this NEXT-GEN (sport not just the car), anything (except maybe getting parts) seems possible. Sunday is Auto Club Speedway. Thanks to COVID and the resultant restrictions, the Series hasn’t been there in two years. It’s almost like a new venue for the circuit. To get ready for Cup’s return they have been grinding on the track. Tire Dragon will make a visit along with some track resin. Throw in a new car, new tires, new wheels, new growing pains along with a dash of a parts shortage limiting the teams’ car inventory and it could easily happen this weekend.

400 miles at Las Vegas to follow. Then off to Phoenix. That track has been pretty racy in the Spring. Then, it’s back home for the nearly repaved Atlanta.

Who knows? Two new winners this season? We had three last season. With everything NEXT GEN (sport, not just the car) it could happen. Not saying it will… but wouldn’t be surprised if it did.

We have a pretty talented group of candidates for this honor-

Tyler Reddick has to be a leading candidate. He did a lot of testing of the new car for RCR and probably knows it’s limits better than anyone in the Series. Based on spins and scrapes and the fact that RCR was the lead developer on the car, I’m not sure any other candidate is better equipped to be the next new winner.

Chase Briscoe looked stout at Daytona, bringing his Mahindra Tractor Ford home third Sunday. It was good to see SHR back up front again. The question is, is it a sign of things to come? Fans can hope.

Trackhouse Racing boasts two contenders for Mr. 200. Ross Chastain and Daniel Suarez are now teamed up to make a run for the honor. Can they “Shake and Bake” their way to Victory Lane and NASCAR history? We’ll soon know.

Harrison Burton in the Wood Brothers iconic #21 has to be a sentimental favorite. This rookie’s win would not only give him Cup’s 200 win but with it the Wood Brothers’ 100th win. They are affiliated with Penske and we’ve seen what those cars can do. Can they come through again?

Daniel Hemric beat 2022 Daytona 500 winner Austin Cindric for the 2021 Xfinity Championship. He’s moved up to Cup with Kaulig Racing. Matt Kaulig and team have been impressive at every level they compete in and surprise wins are right in their wheelhouse. Could Daniel’s first Cup win make him NASCAR’s 200th?

Ty Dillon returned to Cup, joining Erik Jones at Petty-GMS. New car with a new teammate and a new team could produce new results. A Ty Dillon win in a Richard Petty car to be NASCAR’s 200th winner would be a Made For Hollywood script worth watching.

Spire Motorsports is another one of those teams capable of surprise wins. That should suit Corey LaJoie and Josh Bilicki just fine when they roll off Sunday.

Rick Ware Racing has joined with SHR this season which should boost Cody Ware and Garrett Smithley chances to be competitive this season. Enough for a win… probably not, but this season should show improvement.

Todd Gilliland and B. J. McLeod rounds out the field of eligible contenders for this iconic milestone for this Sunday’s race.

There are several others who are eligible who are scheduled to race selected races this season, like Landon Cassill Who knows, Jacques Villeneuve is set to run a few more races this season and he might slip in there to steal it. F1 Champ and #200 Cup winner… that would be a nice addition to his résumé.

As the Cup season heads westbound and down out of Daytona, thirty-six or so drivers will continue on to race for 2022 Championship and the distinction to be the first NEXT GEN Champion. That’s the race most fans will be glued to between now and the final race in Phoenix.

But as you watch Sunday’s race and those others that follow, don’t forget this race within that race. For these 13 drivers, it isn’t for the Playoff or for the Championship. They are racing for an ever-lasting mark in NASCAR history-to be Cup winner #200.

And that, you don’t want to miss.

Be sure to put your pick in the comments below.