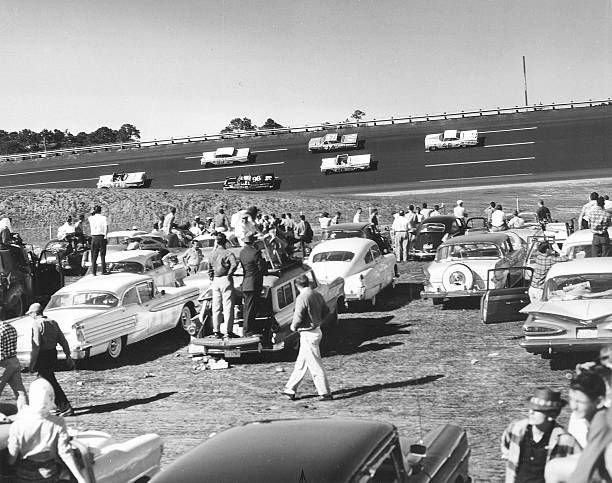 Editor’s note: With the NASCAR Cup season soon to start we here at PTR would like share some memories! Vivan Simons memories below has previously been published at Race Fans Forever

Author’s note: My articles are based solely on my observations.  No statistics are offered…enjoy.


I have been an auto racing fan more than fifty years. Like a lot of teenagers, I hung out with the kids who found the deserted roads and had secret drag racing at night when we were supposed to be at the movies, dances at the teen center or spending the night with a girlfriend. I never got caught when I attended any of these forbidden events. I am sure all of our parents knew what we were doing, but most of them never confronted us. So we lived our “secret lives” in oblivion, thinking all was right with the world.

An absolutely most fantastic and important thing happened in February 1959. Daytona International Speedway held the first Daytona 500. I lived about 60 miles from Daytona so day trips were easy to make. Bright and early a group of us stuffed ourselves into three cars and took off to witness this race. Because we did not have a lot of money, we opted for parking in the infield and watching the race. We had coolers full of Pepsi and lots of sandwiches and chips. We were set.

As we walked around checking things out, we discovered a whole new world. We thought racing at Daytona was a Florida thing. However, it seemed the more people we met, the more we discovered it was an American thing. There were fans from many states there to watch this big racing event. Although I really put no thought into it at the time, I found out there were many types of fans.

Some people we talked with were there simply to party. It was a time for them to just have fun and then say they had been at the first Daytona 500. At the end of the day, when everyone was saying good bye, they said they may or may not come back for the next race.

I remember seeing a group of fans all set up with chairs and a grill near one of the fences. Upon investigation, we found out they belonged to a Ford club in Orlando. They had their attention glued to the track and what was happening. Without asking, one knew they would probably be at every race held there in the future. These are some I will call hard core fans.

Like the group I was with, a lot of people were there out of curiosity and because we were already addicted to speed. We wanted to see these fast cars in action. Those were the people that were fun to be around.

Many years have passed since that initial visit to Daytona. Through those years I have observed fan reaction, both when viewing on television and listening to those who visit different tracks. I have discovered there are different types of race fans in NASCAR, as well as other series also.

Some fans are what I call fair weather fans. They cheer a driver on – as long as that driver is winning. Once the driver goes off the winning streak, their attention goes to the driver who is currently winning or doing very well.

Another type of fan would be the ones who are very loyal to the make of car a driver uses. They then only cheer for the drivers who race that make.

There are a few fans who cheer for a driver simply because of who the owner of the team is. This is also true if they have a favorite crew chief. I have also connected with fans who are only fans of certain tracks and don’t necessarily care who the drivers are just as long as there is racing at their favorite track (s).

I knew someone once who was always a fan of the underdog driver. That fan would curse constant winners and always wish a less funded team would win. He said it was because everyone should have a chance to win.

Some fans will only cheer for drivers from the South, since that is where NASCAR racing started. They do not want Midwest or West Coast drivers to do well. They consider them outsiders.

Did you know that a lot of fans don’t cheer for anyone at all? They go to races to see and to be seen because they think it is a cool thing to do. These are the ones I refer to as Brian’s “Casual Fans”. Those are the ones who don’t know anything about racing, the history of NASCAR or even care what is going on as far as the cars on the track are concerned. They just want to be able to tell others they were there and experienced a race. As far as I am concerned, these are not fans at all.

If one has observed closely through the years, one will see some fans sit through all kinds of weather, long delays and many 0ther inconveniences just to watch auto racing. They are the ones who watch for many reasons including love of speed, competition, beautiful cars, real racers, drivers and just for the sheer joy of satisfaction at what is happening.  This is also a hard core fan like the ones I mentioned above.

The worst type of fan in my mind are the ones who go to watch because they want to see spectacular crashing, rivalries that turn into angry words, or even pushing and fighting. To me these people are not fans at all.

What then, makes the perfect fan? We all have our thoughts on that. Am I a perfect fan? Possibly and possibly not. I love all kinds of motorsports racing – cars, trucks, motorcycles, boats, ATV’s and all other motorized forms. What series it is really doesn’t play a part. If it has speed and a motor, I am a fan. Do I have a favorite driver? Yes, Tony Stewart, since he raced midgets and in USAC open wheel series. Do I have a favorite car make? Yes, Chevrolet. What about favorite car owner? Tony Stewart, of course. What about favorite track? I prefer road courses and short tracks, but I will watch all tracks and feel good about having the privilege to choose to watch or not. Do I have a favorite TV broadcast station? Yes, at this time it is the NBC family. What about the broadcast crew? Unfortunately, we have lost some of the best ones for various reasons. Without naming anyone at this time, I just say I prefer the ones on the NBC networks.  Do I always watch or attend races? I no longer attend in person due to several reasons. I do watch live TV broadcasts normally, but sometimes have to record and watch at a later time. Am I sponsor loyal? Yes, definitely. I also will not support sponsors of some drivers. When NASCAR takes their winter break, I miss them but find other types or recordings of old ones to watch. Do I count the days until the next race? Almost always and right now I am thinking of the first road course race of the season. Why do I do this or feel this way? Because I am a loyal fan of speed and motor racing.

Thank you for reading. Please feel free to add your comments and thoughts.