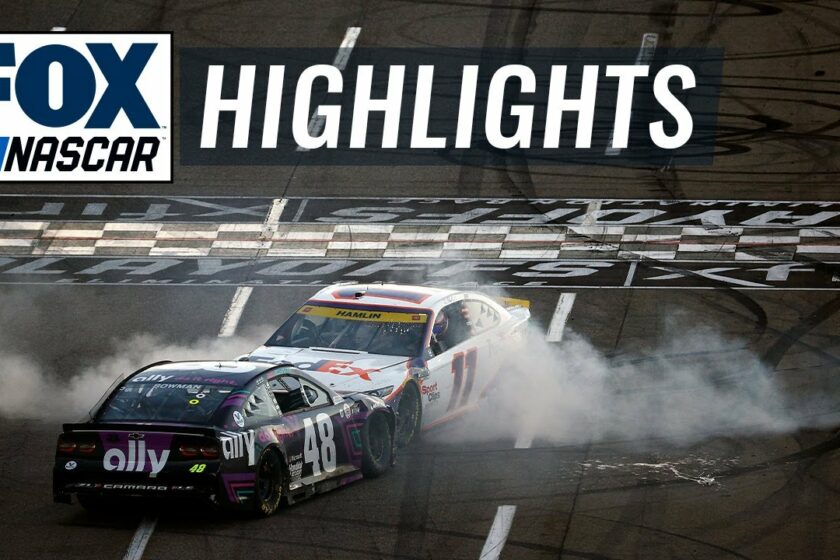 The final race of the round of Eight. The race that decides who will advance in the Playoffs to the Final Round in Phoenix and who gets to race for Fifth in Points. Five hundred laps on that little half-mile paper clip with her drag strip stretches connected by concrete 180 degree turns. Throw in a tricky pit road that includes tight pit stalls and turns on entrance and exit and you have a recipe for action. Add a dash of eight (well seven, Kyle Larson had already clinched his spot to Phoenix) hungry drivers fighting for three spots and you have a near perfect recipe for a action-filled afternoon of racing.

Spin after spin. Some solo and some with assistance. Cut tire after cut tire. Damaged corners or worse on Chasers’ and non-Chasers’ cars alike. One lap above the line, the next lap eliminated, the next lap back in contention. During racing, during caution, even after the race, it didn’t matter. Action was everywhere!

On the lead lap, laps down, back of the pack, mid-pack and for the win. When it was all finally said and done 10 minutes or so after the Checkered Flag fell, eliminated Contender Alex Bowman shared his Victory burnout with a PO’ed, but advancing Denny Hamlin, before hoisting his fourth trophy for the season. Bowman’s win added another twist as it prevented any of the seven Contenders from advancing with a race win and forced them to get into the Finals on Points.

When the dust all settled and all the points were tallied, Kyle Larson, teammate Chase Elliott along with Toyota teammates Denny Hamlin and Martin Truex, Jr. found themselves advancing to the Phoenix Final Four, while Kyle Busch and the Penske trio of Brad Keselowski, Joey Logano and Ryan Blaney were on the outside looking in.

Hyped as the Greatest Race of the season, some say it lived up to its billing. So much so that the little track who just two years ago produced a total of six lead changes in 1000 laps of racing this week is being touted as deserving a third race date. She’s come a long way from the “modernizing tradition” days in the not so distant past when NASCAR was seriously considering pulling a race date if not both from the little half-mile.

Boy, and thankfully, how times have changed!

With it all on the line, what happened up front?

For all the hype, the 2021 Fall version of Martinsville produced a total of 15 Lead Changes, four of which were Racing Lead Changes. RLCs are green flag Lead Changes that are a result of someone passing the leader without benefit of restarts or the leader giving up they lead by pulling off the track to pit. No bunching at restarts or pit strategy calls, just racing and taking the lead away. Racing.

The four RLCs involved two drivers-Chase Elliott and Denny Hamlin. On lap 56, Elliott passed Kyle Larson for the lead. He passed Larson again on lap 85. It would be another 266 laps (over half the race) before we would see Ellott’s final RLC, this time passing Contender Joey Logano for the lead. 38 Laps later on lap 389, Denny Hamlin drive by his teammate and Playoff Contender Martin Truex, Jr. for the fourth and final RLC.

The winning pass on Lap 494 wasn’t even a RLC as Alex Bowman spun leader Senny Hamlin to bring out the final caution and send the race to Overtime. Exciting? Yes. RLC? No.

Considering the track and that a chance for a Championship was at stake, four RLCs is not what I expected. To put it in perspective, if RLCs were Martinsville Hot Dogs, four would have left most fans leaving still hungry and wanting more.

Luckily, RLCs are not Jesse Jones Hot Dogs and there was action throughout the field to satisfy most appetites.

What about the other 11 Lead Changes?

6-Lead Change Under Caution. Some were strategy. Some was pit crew performance. The rest were nothing but where the cars pitted.

4-Leader Pits from Lead. Leader pulled off track to pit giving up the lead

1-Leader Wrecked From Lead. Bowman got the lead not by passing Hamlin but contacting him and creating a caution. A clean pass would result in an RLC, but this doesn’t count as one. This pass proves to be the race winning pass. Though exciting and a pass it wasn’t a RLC.

With Larson pitching a RLC shutout and Chase collecting three RLC’s (second highest compared to Kevin Harvick’s four at Talladega) and Denny ending his RLC shutout with one Racing Lead Change, the RLC Leader Board for the nine races in the Playoffs is as follows-

Last season, Chase Elliott had more RLC than any driver in the Playoffs. He also won the 2020 Cup Championship. If we rank the Final Four, we see the following-

If past performance is any indication of future results, then Larson, Elliott and Hamlin have to feel pretty good about their chances on Sunday. Though behind, Truex, Jr. can’t be counted out. Just look at what he did last Sunday as the #19 raced below the Cut Line more than above and clawed his way up at just the right time to advance.

Just like a one race Final to decide it all.

How does Martinsville rank?

Martinsville’s four RLC landed it sixth out of nine races. It was one RLC away from a four-way tie for third in the standings and eight RLCs behind its other half-mile counterpart-Bristol.. Below are the rankings through the first nine Playoff Races-

Like last season, Chase drove to the front when it counted. Three RLC at Martinsville is impressive. Two passes of the nearly invincible Kyle Larson even more so. Few have the distinction of taking the lead from the #5 during the Playoffs, but Chase did it not once but twice in a single race. Larson is always the Passer and never the Passee, but that’s where Chase put him at Martinsville. That’s hard to ignore. Could Chase be peaking at the right time?

Larson is has been the dominant driver this season-Passing over being passed. Martinsville was different. Coupled with two uncharacteristic speeding on Pit Lane penalties and you have to wonder is Larson, like Harvick last season peaking too soon? Or has the #5 gotten all its bad luck and bugs out of its system before the Big Race? From what we’ve seen from Kyle, crew chief Cliff Daniels and the Hendrick organization it would t surprise me to see them bounce back in a big way.

Denny? Who knows at this point. He comes unglued after losing Martinsville but is at peace if he doesn’t win the Championship…. Go figure. He had an impressive drive going Sunday, starting at the rear of the field for multiple pre-race inspection penalties and coming to the front only to be sent back to the rear again for speeding on pit road. He had the lead and was a few laps from the win when Bowman’s wheel hopping sent him spinning to a 24th place finish. Can he finally put together a winning performance when it counts most? Tune in.

Martin Truex, Jr., like his rank in the RLC, is this years’ underdog, He’s in, so you can’t count him out. Based on everything he overcame at Martinsville to even make it to Phoenix… you can’t discount him. Having former crew chief, Cole Pearn as his secondary spotter for this one race doesn’t hurt his chances either.

With the current Playoff format of the highest finisher of the four is crowned Champ, it’s possible that this year’s Champ may not win the race. They may not have the lead at any point of the race and still take home the big trophy. RLC… you just have to outrun the other three.

The Phoenix Finale 2021 has lots of questions and intrigue. The biggest ones is who will win the Championship and how will they do it? Will they outrun the bear and go for the win or just outrun each other?

I’ll tune in to find out… how about you?

Let us know how you think it will shake out in the comments below.

Wishing all the drivers, Contenders and non, a safe, good race!