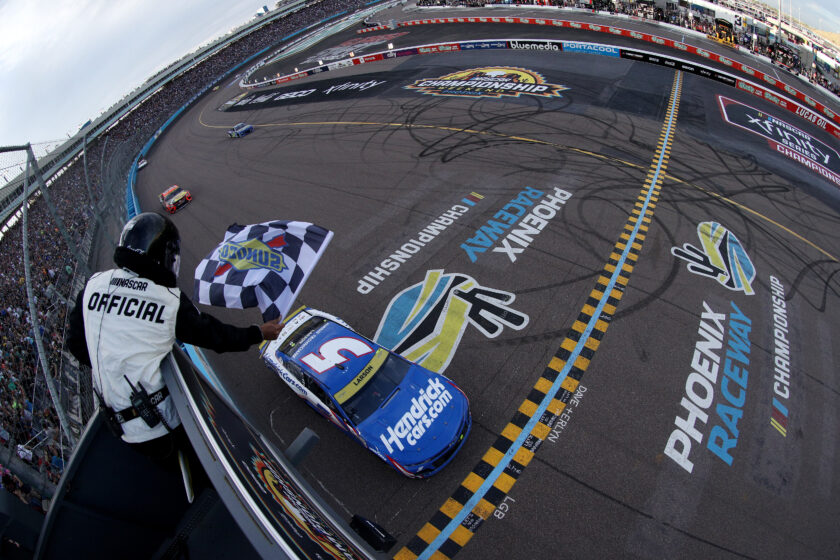 As a result, he got the big Check, the Big Trophy and the title of 2021 Cup Champion.

Not bad for a guy who couldn’t race Cup last year and took his helmet and firesuit elsewhere and tore up the dirt tracks around the country.

It was quite an accomplishment for Kyle Larson, his team and the Hendrick Motorsports organization and a fitting ending to the season and close of the GEN-6 era.

Now about what happened up front?

Phoenix had a total of 18 Lead Changes among seven drivers. Seven of those occurred during green flags.

One of those seven occurred at the Start of the Race (Elliott passed Larson, Lap 2) and another occurred within three laps of one of the 9 restarts (Larson passed Kurt Busch, Lap 162). The remaining five green flag lead changes were Racing Lead Changes, green flag Lead Changes that are a result of someone passing the leader without benefit of restarts or the leader giving up they lead by pulling off the track to pit. No bunching at restarts or pit strategy calls, just racing and taking the lead away.

Lap 50-Blaney passed Harvick back and

Another 116 laps later and 76 laps from the end of the race Elliott passed Larson for the fifth and final RLC… not the winning pass mind you, just the last RLC.

The winning pass occurred under Caution when Cliff Daniels and crew got their driver our first on the “Money Stop” and Larson did the rest.

What about the other 11 Lead Changes?

The other 11 Lead Changes occurred as a result of Lead Change Under Caution. Some were strategy. Some was pit crew performance. The rest were nothing but where the cars pitted.

No Green Flag runs where the Leader had to give up the lead to pit. No one moving anyone out of the Lead. Just Lead Changes under Caution.

How did the drivers finish up?

With Larson and Hamlin finishing with RLC shutouts and Chase collecting another RLC, Elliott was able to break the three way tie and come out collecting the most RLC for the Playoff. Truex Jr.‘s multiple RLC got him out of the pack of two RLC drivers, but not enough to overtake Kevin Harvick. Ryan Blaney moved up into the 2 RLC pack with his single pass on Sunday.

Last season, Chase Elliott had more RLC than any driver in the Playoffs. This year he repeated that performance as having the most RLC. Unfortunately for Elliott, unlike last year, having the most RLC didn’t translate into a Championship.

One thing this year’s RLC points to is if you want to compete for the Championship you had better be willing and able to pass the leader at times other than restarts and assuming the lead when they pit. The Top 3 in RLC were also three of the four finalists. Kevin Harvick snuck in to break it up a four for four.

So how many races did the drivers have an RLC?

Looking at the Racing Lead Changes in a slightly different light… how many races did each driver have one or more RLC? The following is a look at that ranking-

Remember, this is over the final ten races of the season.

How does Phoenix rank?

When you consider the annual anomaly known as Talladega and Bristol in the first round cutoff slot, it was one of the best of the rest when it came to RLCs

That breaks down to an average of 6.1 RLC per Playoff race. Toss out ‘Dega, which had just under one-third of the RLC and it drops to 4.6. Bristol, together with Talladega make up over half of the RLC, drops the race average to 3.6

With that said, in the “Greatest Season Ever” (not my words, just what has been promoted) I anticipated little higher numbers when it came to the action up front. That just didn’t materialize. The 2021 Cup Champion is partially to blame. When a driver leads as much as Kyle Larson did this season and no one can pass him, you don’t have many Racing Lead Changes.

Additionally, there were at least three ironies in the race yesterday-

The winning lead change took place in the pits not on the track. Caution Flag Lead Changes made up a significant number of the Lead Changes this season. Again, the race was a reflection of the season.

Finally (for me), the pass for the win was the result of an outstanding pit stop by Cliff Daniels and crew. They delivered when it mattered most and got Larson out front where he couldn’t be bested. As one fan observed, it was fitting that the Champion of final Cup season using the GEN-6 car with its five lug wheels was decided in the final pit stop ever using them by the pit crew who got five off and five on the quickest.

There was some other stuff, but I won’t go there. We’ll just leave it by saying Congratulations to Kyle Larson and crew. 2021 Cup Champion has a nice ring to it. Wear it well in 2022.

Thank you fans for checking these stats throughout the season. Hopefully, the NEXT-GEN will produce even more RLC. We’ll soon find out!

Stay Safe… and Thunder On