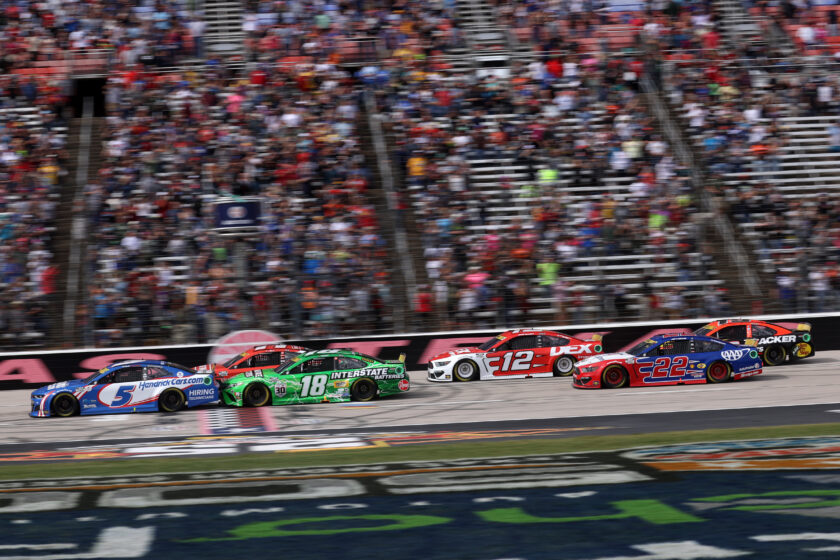 Hopefully Race Fans, this time we will get the Lucky Dog to get back on the lead lap with tracking Racing Lead Changes, green passes for the lead without benefit of bunching due to restarts or where the Leader pulls off to pit and gives the lead to another competitor. Just old-fashioned green flag racing passes for the lead.

They say everything is bigger in Texas… including the butt-kickings!

Once again, Kyle Larson showed fans and the field what a NASCAR butt-kicking looks like. Larson started on the Pole and lead the first 26 green flag laps and one lap of caution before his caution flag stop took him out of the lead. He drove to the lead again on lap 84, passing teammate William Byron for the lead. He gave up his lead 11 laps later when he pulled off the track to make a green flag pit stop.

Twenty-three laps later after a cycle of green flag pit stops, Larson motored around Kyle Busch for his second Racing Lead Change. For the remainder of Stage Two and the entirety of Stage Three, Larson’s #5 Chevy Camaro was the only car up front.

If once you get to the front no one can pass you and you lead the final 216 laps that’s a butt-kicking!

What about the other 6 Lead Changes?

3-Leader Pits from Lead. Leader pulled off track to pit giving up the lead

The winning lead change occurred on Lap 117, when Kyle Larson passed Kyle Busch and everyone saw his back bumper for the final 216 laps.

With Larson earning two more Racing Lead Change and Denny Hamlin pitching a second shutout in a row. Larson is now brings his Playoff RLC total to 6 tying him for third with eliminated Chaser, Kevin Harvick, and three behind RLC leader Denny Hamlin. The Playoff RLC Leader Board is as follows-

How did Texas rank?

Texas’ two RLC landed it tied for fifth on the RLC Race Leaderboard. Below are the race rankings through the first six Playoff Races

Kyle Larson did about all he could do this race when it came to leading. As mentioned earlier he was the passer and never the passee, except when he pulled off the take and let them pass. Cliff Daniels and crew had his back when he pitted and Larson took care of business when he was on the track. It’s not the first time we’ve seen that kind of performance out of the #5. It might not be the last… much to the disdain of the competition.

Another race and another shutout for Denny Hamlin. He started the playoffs racing to the front but this is two in a row now where he hasn’t made it up there. That’s not good. Holding back something? I wouldn’t think so, but we’ll see if results change or this 0’fer streak continues at Kansas.

Feuders Kevin Harvick and Chase Elliott find themselves side by side in RLCs. Let’s see if this fight continues to the front or if it’s now over.

There are several Playoff contenders in this Round of Eight who are going to have to step it up. Brad Keselowski, Martin Truex, Jr., Ryan Blaney and Kyle Busch are barely on the board. I’m not sure in Cup if you can win this Championship without taking the lead at a pace more than these have achieved.

Joey… speaking of 0’fers, it’s now seven in a row without an RLC. Nary a one since these Playoffs started. Now’s the time to get on the board. We have three races left in the Playoffs and you still don’t have a RLC. You are approaching a must-win point to advance and not sure restart and strategy passes will be enough to get you to Phoenix. We’ll see. Stranger things have happened. That’s why they race and that’s why we watch them race.