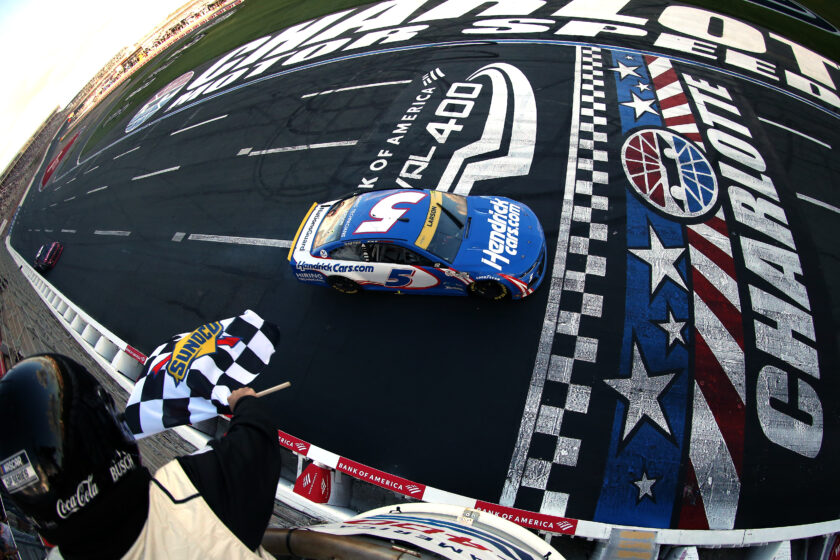 Sorry Race Fans, still playing catch up! With this installment only one lap down. Maybe I can get the Lucky Dog before Kansas rolls off.

Lap 25, three laps into the 3rd Green Flag Run and coming down for the Stage One win, Chase Elliott passed AJ Allmendinger for the Stage win and the only Racing Lead Change.

It was timely as it gave Chase 10 points and one Playoff point for the Stage win. At this Cutoff race, every point mattered so this Racing Lead Change was big.

Unfortunately, it was the only one.

What about the other 14 Lead Changes?

5-Restarts. Lead Changes occurred within a lap of going green

5-Leader Pits from Lead. Leader pulled off track to pit giving up the lead

The winning lead change occurred on Lap 102, when Kyle Larson passed Denny Hamlin on the Restart and held off the field for the final eight laps.

With Elliott’s one Racing Lead Change it brings his Playoff RLC total to 6, tying him for third with eliminated Chaser, Kevin Harvick, and three behind RLC leader Denny Hamlin. The Playoff RLC Leader Board is as follows-

How does the ROVAL rank?

The ROVAL’s single RLC landed it at the bottom of the RLC Race Leaderboard. Below are the race rankings through the first five Playoff Races

This was the first Playoff Race that Denny Hamlin did to have a RLC, ending a five race streak. Is this an anomaly or the start of a trend? Guess we’ll find out at Texas.

Overall, the ROVAL provided plenty of action. It was a cutoff race with four drivers facing Playoff elimination. You had Kyle Larson overcoming the alternator belt issue and facing elimination to come back for the race win.

Then there was the whole Kevin Harvick-Chase Elliott story where Harvick pays back Elliott for Bristol, Elliott fails miserably in an attempt to wreck him back, only to mind game him into the wall and out of the Playoffs some 44 laps later.

There was a lot going on in the 110 laps around the Charlotte ROVAL-unfortunately, only once was it up front and not aided by one of the nine restarts or a result of pit strategy. Based on fan reaction, that’s not a problem as this was voted as one of the best races of the season.