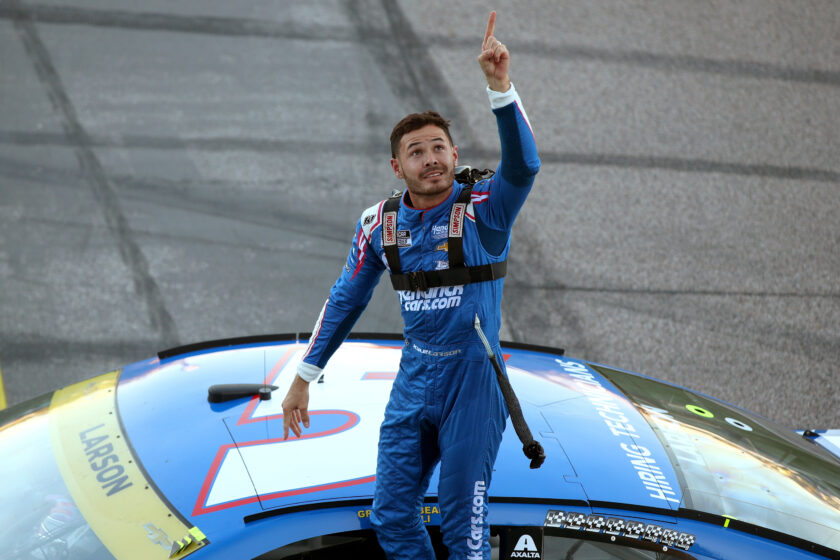 Hopefully Race Fans, this installment gets us back on the lead lap with tracking Racing Lead Changes, green passes for the lead without benefit of bunching due to restarts or where the Leader pulls off to pit and gives the lead to another competitor. Just old-fashioned green flag racing passes for the lead.

But we are in Kansas Toto!

Like that movie classic, The Wizard of Oz, weather was instrumental to Sunday’s story. Dorthy’s story started with swirling Kansas winds lifting lifting Aunt Em and Uncle Henry’s home containing Dorthy and her dog Toto away and landing them in Technicolor Oz. Sunday’s Kansas wind, though not swirling was strong enough to blow competitors into the SAFER barriers and landing some not in Oz but in a place they never wanted to be-the land below the Playoff cutoff line.

Car after car smacked the wall-nearly all the Playoff contenders found themselves there at least once. Most were able to complete their journey but some, like Ryan Blaney saw his solid Playoff position disappear with a rare DNF.

With most of the Playoff competition running in a damaged state, the race saw five racing lead changes (RLC) among four drivers two of which were previously eliminated Playoff contenders. But when the day was done, Kyle Larson had his third win in a row and the ninth for the season. Larson won the race on a pass during a restart but collected a Racing Lead Change along the way. Teammate Chase Elliott got one as well. Their eliminated Playoff teammate William Byron went to the the front twice passing the leader, not during a restart or having the leader pull off the track for a pit stop but by a Racing Lead Change. Chevy driver Tyler Reddick picked up the final RLC as part of a spirited battle into Run 5 of the race.

The six other Playoff contenders were never able to make a racing lead change to move through the front as cut tires and dinged fenders forced them into alternate strategies to salvage their days.

Such was the uncertainty of a fickle Kansas.

What about the other 18 Lead Changes?

4-Leader Pits from Lead. Leader pulled off track to pit giving up the lead

The race restarts provided the bulk of the action at Kansas as each of the seven restarts produced at least one lead change during the three green flag laps that followed. The second restart on lap 28 produces a lead change each of the three laps and three of the Racing Lead Changes in the laps that followed. Early on, but it was the best action up front for the race.

The winning lead change occurred on Lap 229, when Kyle Larson passed Chase Elliott on the final restart and held the field off for the final 39 laps on his way to a 3.619 second win. It was his ninth for the season and third in a row.

To put things into perspective, Larson has scored just under 20% of the RLCs so far in the playoffs.

How does Kansas rank?

Kansas’ five RLC landed it tied for third on the RLC Race Leaderboard. Below are the rankings through the first eight Playoff Races-

This was the first Playoff Race where a non-Playoff Contender scored the most RLCs with William Byron scoring two.

Kyle Larson, who is on a three race win streak continues to add to his RLCs. He didn’t dominate Kansas as much as Texas but was still able to find the front by passing the leader at a time other than a restart or having the leader pit.

Contender Denny Hamlin, who opened with scoring RLCs in the first five races has now not passed for the lead in three races in a row. Not the trend one would hope for racing for a Championship. Can he right the ship at Martinsville?

Chase Elliott, who scored the most RLCs in the 2020 Playoffs and scored RLCs in the most Playoff races, still finds himself in contention this season. He won the final two races last season. Can he do it again?

Kyle Busch sits just above the Playoff Cut Line and Ryan Blaney sits just below. Both are tied with 1 RLC apiece. Martin Truex, Jr. and Brad Keselowski trail Blaney in the points standing but are ahead in RLCs with two apiece. Can they collect a few more and make it into the Finale?

The final contender, Joey Logano has lead races but has yet to make it to the front on an RLC. He doesn’t show on our Leaderboard. He’s also going into Martinsville needing a win to kepp his Championship hopes alive. He’s won there before to advance to the Finale and when he did he won the Championship. It’s hard to win a race if you can’t go to the front. Now would be a great time for the #22 to start passing people for the lead.

Let us know how you think it will shake out in the comments below.