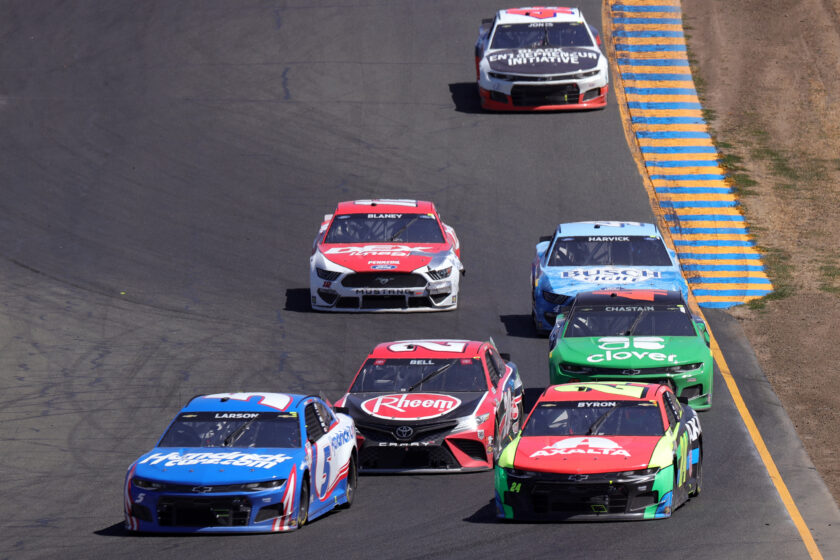 The NASCAR Cup Series traveled west to Sonoma to add some right turns to its left-turn laden season.

It was interesting to see them twist and turn and occasionally engage in off-track excursions, but the bottom line was Kyle Larson kicked butt again. Like the old Herman’s Hermits song, “Henry the Eighth” it was “second verse, same as the first”. Whether it was little bit worse is still up for debate.

Let’s just say, turning right is not a problem for Kyle Larson.

Before we get into that, let’s look and see what the NASCAR Loop data showed us about the race from California wine country.

Green Flag Passes – We had a few

When fans talk about road course appeal, more action is the main reason given. At Sonoma, NASCAR’s loop data captured 2803 position changes for the 37 car field over the 74 green flag laps of the 92 lap race. This worked out to an average of 37.88 passes per green flag lap. Nice and 43 more than what we saw at the last road course – but COTA was rain-shortened and had a higher average-69 passes per lap average.

The Toyota/Save Mart 350 saw 13 lead changes among 7 drivers. It was no surprise race winner Kyle Larson led the most times (6) and the most laps 57. Next closest was Chase Elliott who led one 13 lap stretch. Everyone else was single digit laps led.

Five of the 13 lead changes occurred under caution and all were a result of the leader pitting under yellow and relinquishing the lead to another car who stayed on track and did not pit. So there were no pit stall position passes or races won off pit road for the lead but lead changes resulting from different strategies. Bottom line-no one passed anyone, but the lead was relinquished.

The remaining eight lead changes occurred under green with two occurring on the eight restarts, three when the leader pitted under green to give up the lead and the final three were actual racing passes on track – William Byron passing Kurt Busch on lap 28, Kyle Larson passing Chase Elliott on lap 58 and after giving up the lead to pit on lap 65 came back to pass Kyle Busch on lap 69.

Lead Change Summary paints one picture of the race

From the Summary you can see the ebb and flow of the race. Several points to consider are that all the Caution Flag lead changes were a result of the leader pitting and giving the lead to a competitor who stayed on track.

Another thing seen is that once Larson got the lead on the first lap of the restart after the 5th Caution, he was never bested through three more restarts. So even with the field packed up multiple times once he got the lead no one was going to take it away.

In addition to winning all three Stages (more on that later) even more impressive was the fact that no one ever took the lead away from him. Once in the lead, the only time he lost the lead was when he gave up the lead to pit and gave it up to someone else (more on that as well).

Finally, when he lost the lead he didn’t lose it long as it only took him 15, 11, 4, 2 and 2 laps to get the lead back from the unwitting competitor who only thought they had something for him.

The talking head will point to other metrics to show how competitive the race was like how all 33 cars running at the end were on the lead lap. Remember two factors to take into consideration on that – the length of Sonoma, it’s a road course and the flurry of cautions that allowed any Lucky Dogs and Wave around to rejoin the race. Bubba Wallace for one was a lap down before that hit and was able to use that to garner a 14th place finish.

Margin of victory was a mere 0.614 seconds will be touted as well. That is in fact the results and what the record shows but also remember that was for a two lap run. The way Larson was racing Sunday I shudder to think what both those numbers would have been had the final 17 laps run green.

Sonoma was just a continuation of the dominate run Kyle Larson has been on. There are all the tell-tale stats you’ve heard so far over the last few races –

But the most impressive stat that is not being mentioned is no driver has passed Kyle Larson for the lead on the track under green since Chase Elliott did it on lap 132 of the Coca-Cola 600. Chase is the only driver in the last two races who has taken the lead from Larson-the only other leaders have been when he gave the lead up due to pit stops.

And that race fans is a “butt-kicking” any way you cut it.

Note – there were will not be any stats for the All-Star Race. I haven’t figured out the format yet so there is no way I can figure the stats. In the meantime I’ll use the time to play catch-up and share some thoughts on some other topics of interest. Till then…