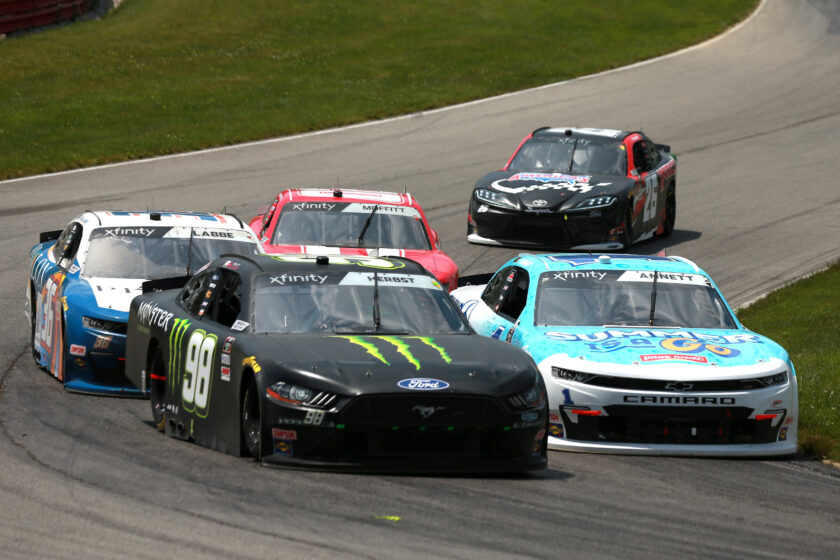 There was racing on road courses this weekend in Xfinity and Cup series. Saturday, the Xfinity series were at Mid-Ohio and Sunday the Cup Series raced at Sonoma. Because of the “Cuppers” racing at Sonoma there was a twist to the Xfinity race, because of NASCAR’s modified Pit Stop Procedures for the Mid-Ohio Xfinity race. In short, during green flag pit-stops you could only add fuel or IF needed, NASCAR could allow you to change tires. On a yellow flag stop, you could take four tires or possibly get fuel. You couldn’t do both. If you wanted to change tires as well you had to pit a second time. Also in play a during the race was a minimum time limit on green flag stop and a maximum time on a yellow flag stop.( More here )

In the race Austin Cindric started on pole with Ty Gibbs on the outside with the Burton cousins behind them. Cindric managed to hold on to the lead. Behind him some of the drivers were trying to get all they could at the start of the race. This brought out the caution and the cleanup crew and the wrecker for Noah Gragson’s car after he tore the front of it off in turn one. Tommy Jo Martins hasn’t had much luck lately, with three DNF’s in a row. This time he brought out the second caution off the day when the engine in his car expired. AJ Allmendinger, who had started in twelfth place, was fast and before the end of the stage he had passed Austin Cindric to take the win in stage1.

At the start of stage two, drivers had learned the lesson from Noah Gragson and Harrison Burton’s mistake in stage one. This time everyone made it through turn one without running out of pavement this time. Different pit strategies had put Ty Gibbs in the lead with his team-mate Daniel Hemric beside him. With the way pit-stops procedures were mixing up the field we did get to see great racing. So ,AJ Allmendinger and Austin Cindric were able to move up though and were running near the front coming to the end of the stage.

The preferred strategy seemed to be pitting under green for fuel near the end of the stage. That left the teams with the option to pit for tires under the stage break or stay out. By pitting only once in the stage break you would gain positions over cars that had to pit twice for both tires and fuel. You could say you like “live” pit-stops better. However, for stand-alone events on road courses this is a format that works really well.

At the end of stage two Justin Haley opted for some points and stayed on track to take the stage win. Ryan Ellis was one of the drivers that had made it into to top ten at the end of stage two. Ellis, who had a working strategy and a good handling car, was able to make it into top ten. Unfortunately Ellis was involved in an incident on the last lap and a finished outside top twenty-five

Not even another restart and NASCAR overtime could prevent AJ Allmendinger from winning. Justin Haley finished second and Ty Gibbs third, while Andy Lally. Brandon Brown, and Josh Williams all finished inside the top ten. A shout out to Josh Berry driving the Jordan Anderson #31, eight place in his first road course race ever

Normally I do like the racing on Sonoma very much. This time, IMHO, it was barely OK. So once again, I’m not going to say that much about it. The way things stand right now in Cup, HMS are on a roll and Kyle Larson is next to unstoppable. So because of that I’m going to leave the subject of Cup at that but if you want read more on the Cup-race, Check out Vivians article. And Davids break-down on the Sonoma stats. Click here.