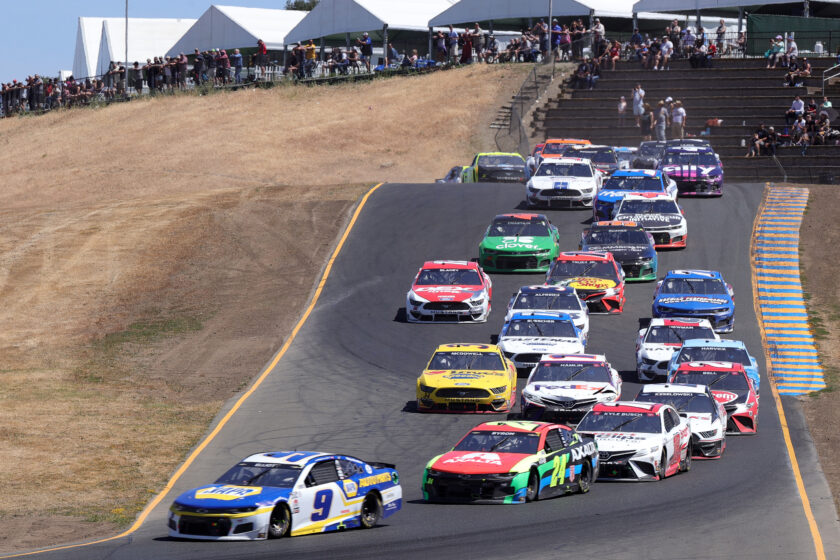 I am so proud of NASCAR for still having an Invocation and our National Anthem before the Cup races. Today I felt proud during both.

When they showed the track map, I was happy to see they still had the carousel in use for the race. Prior to the green flag, Jeff mentioned that turns 7 and 11 are both heavy braking zones. Clint then added that turns 6 and 10 were the trouble zones. They then talked on the radio to Kyle Larson, who was the pole sitter. As usual, they announced the first 5 rows, along with pictures of the drivers. We were then left to watch the scroll across the bottom to see where everyone else was starting. Jamie told us that KyBu had said it was always a headache at this track. That was surprising coming from him.

Stage 1 started and all went smooth for a bit. We heard that KyBu wanted more front turn and Jeff spoke briefly about the forward drive. Then we heard Bell was having trouble and he wound up going to pit road where they checked in the trunk and under the hood. They reset the ECU and he was back on the track. Jeff talked about the elevation changes. We were told Reddick had never seen the track and he had a couple of laps in the pace car to get familiar with it. On lap 8 some clear plastic was caught on Harvick’s grill and they discussed how he could possibly make it to lap 10 when the competition caution would come out, since there had been no practice. During the competition caution they could only put tires on, but not take fuel. This was interesting, I thought. Hey, we heard Cody Ware had picked up 22 spots and I felt that was great. It was reported Logano was having a tire problem where a tire was coming apart. Dillon was having an alternator problem, so he was having to use the battery which meant he had to turn fans off. They told us that Larson had already led more laps in this race than he had led in all other Sonoma races combined. During the pit stops, Wallace was too fast exiting so he got a penalty. All went well the rest of stage 1, which Larson won easily. The booth told us that he had won 6 of the last 8 stages.

Stage 2 went fairly well and Byron was leading with 10 to go. Larson had moved up to 2nd though he had restarted this stage in 15th position. Elliott was also moving up. Stenhouse had a right front go down and he hit a barrier, which lead to him being off track. A caution came out for this. Wallace then had a flat with 3 laps left in the stage. Larson won stage 2 and Logano came in 2nd.

Stage 3 started with KuBu and Elliott on the front row. Elliott was leading with 41 laps to go in the race. Larson and Truex had moved up into the top 5 although they had started back in the pack. Not too long after that, Larson was in 2nd place and Elliott had a 4 plus second lead. Then we went to commercial. When we came back, Elliott had only a 1.5 second lead. When I mentioned how fast Larson’s car was, my in house expert told me a lot of it was his ability to control the car and find the edge. That made a lot of sense to me. We were then treated to their ones to watch. Jeff took Larson, LarryMc took Truex, Jr. Clint went for KuBu, Jamie – KyBu and Mike took Elliott. With 34 laps to go there was a great battle going on between Elliott and Larson. With 33 to go, Larson took the lead again. Truex, Jr. passed Elliott while we were at commercial. With 29 to go, Reddick was up to 7th.

About this time, green flag pit stops began. Truex, Jr. pitted with 27 to go and Larson pitted the next lap. Larson was able to pass Truex, Jr. with 24 laps to go and the broadcast finally gave us the Crank It Up feature with 23 to go. With 22 laps to go, Larson then passed KuBu and took the lead again. They started showing fans that were in the stands and how they were really cheering Larson on. Sonoma has been called his home track as he is from Elk Grove which is about 80 miles away so he had lots of fans attending the race. Jeff started talking about how they needed to keep their tires good until end of race, and Clint added that they also needed to manage their brakes. With 19 laps to go, Houff had a rear gear problem and pulled off track. After caution, Larson was off pit road first, but since everyone did not pit, he was back in the pack some. However, with 15 to go, he was back in the lead. About this time, I felt Mike was starting to panic over the fact that Truex, Jr. was not up front. For some reason, he always seems more concerned about the Toyota drivers, imo. With 14 laps to go, Chastain hit LaJoie which resulted in not only LaJoie, but Byron, Harvick and Bowman received damage in the pile up. Chastain cut across the grass and resumed racing, but we never heard if he passed cars in the process or not. We did hear that NASCAR said it was okay. I still question that call. Shortly after restart, and with 10 to go, Elliott passed Larson for 2nd

A mention here that as I was watching the scroll across the bottom at different times, I saw so many names of drivers that I did not know, much less know they were in the race, since they were not announced in the starting lineup segment; nor had they been mentioned or talked about during the race.

With 5 to go, Cody Ware went off track after an incident and then Preece was off also. Never found out what really happened there. After the caution, restart was clean, but then shortly after, Alfredo got spun by Bowman and then got into Bell. Another caution! On the restart, Elliott and Larson were on the front row. Larson quickly took the lead and since it was a green/white/checkers, and no more cautions, Larson went on to take the checkered flag for the win. This was 2 weeks in a row he had won all stages, and the race. The top 5 finishers were Larson, Elliott, Truex, Jr., Logano and KyBu.

Thank you for reading and if you have any thoughts, corrections or additions you would like to point out, please comment below.