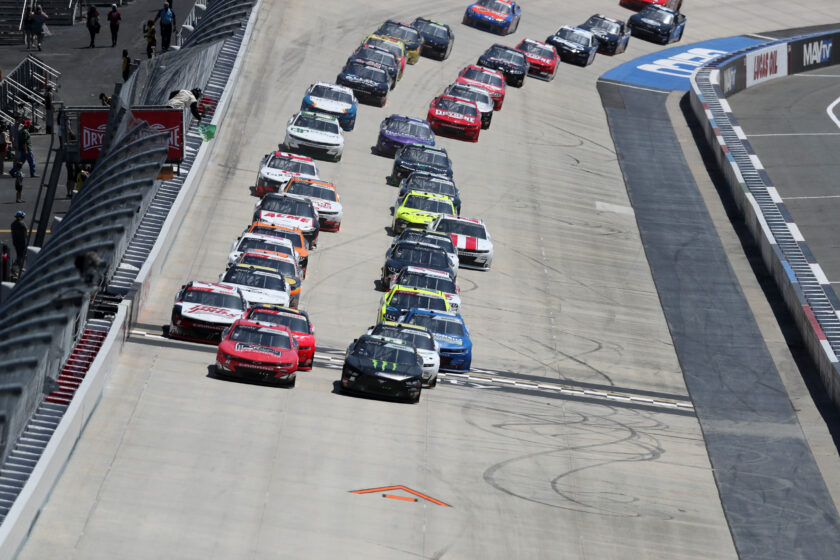 I don’t know what to write about the past race weekend. Of the Dover races I think that the Xfinity race was a little bit better. Not that the Cup race wasn’t good, but my feeling is that FS-1 had better coverage of the action during the Xfinity race. In general, I would like the race coverage to be more about the race and stories from teams and their drivers rather than the TV-announcers, especially during the pre-race show.

On the first lap of the Xfinity race, Daniel Hemric took the lead from starting on pole, only to be passed by Justin Allgaier on the next lap. Allgaier than held on to the lead and won stage 1, after surviving a couple of restarts. Josh Berry and AJ Allmendinger finished in p.2 and p.3–followed by about the most of the drivers we normally see in the top ten.

At the start of stage 2, Tommy Jo Martins, who pitted earlier at one of the cautions in stage 1, had taken over the lead. Allgaier soon took over the lead. However, after a few laps under green we had a accident on the backstretch just before going into turn three. Jesse Little and Josh Williams spun or maybe got some “help” spinning. As this is Dover, they ended up on the bottom of the track. Matt Jaskol, driving the #13 for Carl Long, got hit from behind and ended up on top of Jesse Little’s hood.

To me it feels a bit sad, but the only time these guys a bit back in the field would get some TV time is when they are involved in a big crash. They are racing hard to survive and maybe on a good day get a finish inside top 25. IMHO they deserve a little bit more than that.

A few laps after the restart, Zane Smith lost brakes on the #11 and hit Brandon Jones in turn two, taking them out of the race. On the restart after the clean up Josh Berry took over the lead and won the stage, after the yellow flag once again came out, this time for Kyle Sieg’s accident in turn 1.

At the beginning of stage 3, Justin Allgaier and Josh Berry took turns leading. With about 50 laps to go Austin Cindric had moved up in the field, was able to get the car under him and passed his JRM team mates. No one had anything for Cindric at the end of the race and Cindric won the race. Josh Berry came in second after doing battle with Justin Allgaier, so Berry won the Dash for Cash bonus. AJ Allmendinger in fourth and Ty Gibbs rounded out the top five. A shout out to Ryan Sieg, who scored a third top ten in a row, and another top ten for Brandon Brown.

I’m not going to say to much about the Cup race, Vivian Simons has a great recap about most of what went on. Please click here and finally, a few notes. There where nine penalties for speeding on pit road this time, the second most this year after Phoenix with eleven. HRM drivers led 382 of the 400 laps with the winner Alex Bowman leading the last 97 circuits. A shout out to Tyler Reddick p.8, and Daniel Suarez p.9, this is great for a start-up team.

The month of May means IndyCar is home at Indianapolis Motor Speedway. And to start up the racing there 2021 GMR Grand Prix on the Road Course. Former Haas F1 driver Romain Grosjean started on pole with Josef Newgarden on the outside. Jack Harvey third and last weeks winner Alex Palo in fourth. Swedes Marcus Ericsson and Felix Rosenqvist once again didn’t manage to move on from the first round of qualifying and had to start in the back half of the field. Ericsson was able to move up a few spots to finish p.10, while Rosenqvist didn’t have the day and would finish p.17.

As it always, passing is very difficult in Indycar races and most of the lead changes are due to strategy and differences in the pit-stop cycles. By the end of the day it was Rinus VeeKay who had a fast car and the strategy in place and won the race. Second place to early leader Romain Grosjean and Alex Palo in third. With five different winners from four different organizations so far this year, it’s going to be exciting to continue watching. So to save the Swedish colors this weekend, I once again had to turn my eyes to Indy Lights and Linus Lundqvist. Lundqvist won the first race of the weekend after starting on pole and leading all 30 laps. In the second race Linus Lundqvist started second and finish fifth. The action across all of motorsports was exciting this weekend, and I look forward to the next weekend with NASCAR racing at COTA and qualifying for the Indy 500.