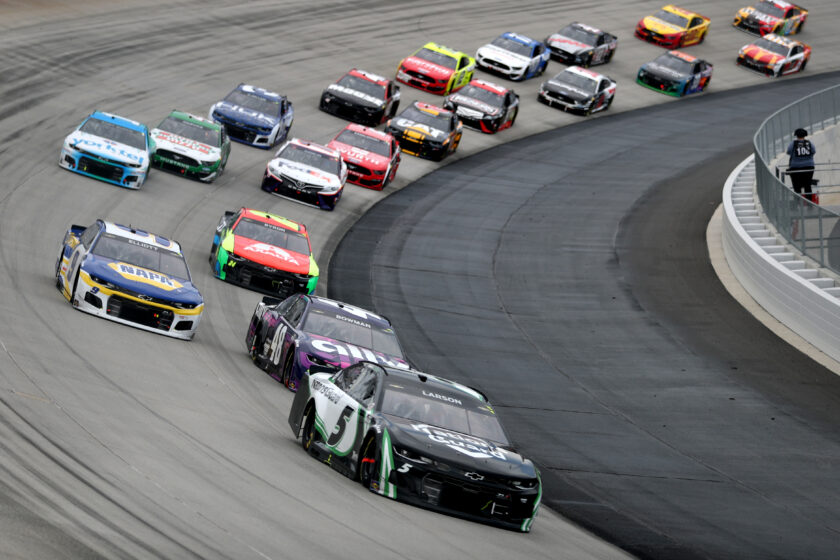 I always enjoy the Invocation at races and am glad we still have that privilege and right, as well as our privilege of having our National Anthem performed at our Cup races. This week’s Anthem was great!

I have always felt that the drivers and the fans were the most important part of the races. That is why I keep beating what in America is called a “dead horse”, when it comes to one part of the broadcast. Why, oh why, can’t they take the time to tell us ALL the drivers who are racing in these races? When they stop after row 5, and we have to watch the scroll to see where some of our favorite drivers are starting, I just become disappointed and fear that NASCAR is losing young fans over this lack of respect for all the drivers. Every week I hope that will change and it never does.

It was good to see fans in the stands and most of them were not wearing masks, as the mask mandate had been lifted, and there was no limit on the number of fans allowed at the race. During the parade laps, they once again talked with Byron, as they had done the last race.

After Stage 1 started, they gave us some side by side cameras of Harvick. One was him in the car, and one was of his car on the track. They used this to explain how he was driving the track. Shortly after that they updated us on Elliot, who had started at the back because he had failed inspection twice. By lap 10, he had moved up 12 spots. We then had our first commercial at lap 15. When we came back from commercial, Truex, who had the lead from the start of the race, was now in 4th. He had been passed by Byron, Larson and Harvick. Mike gave us a turn 2 alert in a panic type voice. However, when they showed the replay, I saw nothing that would create this type of reaction. JMO…On lap 27 we were told KyBu was possibly having an engine problem. His car was sounding strange and they thought he might be down a cylinder. I noticed that Harvick, now in 3rd, was almost 4 seconds back by lap 32. The competition caution came at lap 36. Reddick, McDowell and LaJoie all received speeding penalties. Truex had a lug nut fall and interfere with the jack, so he came out of pits in 12th. Shortly thereafter, we were told that KyBu’s engine problem was possibly terminal. After that, we heard that McDowell was having brake problems and then on lap 45, we heard Byron also was having brake issues, and he said on the radio they were going all the way to the floor. We then got an update that Elliot had made it into the top ten. Lap 55, KyBu went a lap down and Larson was still leading. Jamie told us that Truex was talking about how hard his car was to turn. They showed us LaJoie scraping the wall and Elliot reported brake fade with 31 laps to go. Larry Mc gave us some information on brake cooling options and explained how some might have been a bit aggressive with the tape on the brake ducts. As Larson was starting to pass Briscoe to put him a lap down on the last lap of the stage, Briscoe hit the wall while trying to stay on the lead lap. Larson then won stage 1, and we were shown all the foam that had come out of Briscoe’s right side door when he hit the wall.

As Stage2 started, there were only 19 cars on the lead lap. KyBu was reportedly 7 laps down, but he was flying, we were told. Josh Berry had been caught speeding on pit road and Elliot was now 2nd. Blaney had hole in his right headlight and they were getting bear bond ready to repair it. Then we were told that Larson had lead more laps in 2021 than his other 3 teammates combined. Great info! On lap 51 of the 2nd stage, Berry was in the wall due to a flat tire. They said this was the first caution in the race due to cause. Blaney came in before the pits were open to get the hole in his headlight repaired and he possibly had to get a flat tired repaired. He will have to start at the back when they go back to green. We learned then that Buescher now had more laps in the top 10 than he had had all year! Fantastic info! There was not much going on with 30 to go in the 2nd stage. We got a Briscoe update and they finally did a through the field segment. Larson once again won the stage and this was the 4th time he has led first 2 stages. It was the 6th time Larson had led more than 150 laps in a race. I did not check these stats they had given us.

Stage 3 began with Larson out front and Bowman was second. All was quiet and we got an update on the Coca-Cola drivers. The report was that Logano had a hole in his grill so he fell back to 14th. After that, we got their “Ones to Watch” report and they all agreed it was Larson. With 130 laps to go, Hendrick cars were 1-4. Race was mundane at this time. With 126 to go, we got a “Crank It Up” feature and it was a good one with the sounds of the cars and also chatter from some teams’ radios. By the time this was over, they started getting ready for green flag pit stops. Larry Mc told us how important it was to let the car behind you know when you were getting ready to pit and they used their ghost feature to show us the tire drop off after 45 laps. Shortly thereafter, Almirola hit the wall hard and was a bit dazed as he got out. It was due to a r/f tire down and after the crash, the car caught fire. Later, in his interview, he said it was a very hard hit and he did not want any more like that. He mentioned a possible suspension break. The caution allowed everyone to pit and Bowman was out first with the fastest pit stop any one had had all year. Stenhouse was penalized for being too fast on pit road. On the choose rule at restart, both Bowman and Larson took the outside and Elliot took the inside. Preece got the free pass on this caution and they said he was only one lap down now. Kez fell back to 18th due to lug nut problems. A caution came out when Alfredo went into the wall after Stenhouse got into him as he tried to fill a gap that was not there. With 82 laps to go, they showed us a very nice tribute on the wall to Jimmie Johnson because he had 11 wins at Dover. The first 8 drivers were on older tires than the ones who had just pitted, but we were told the tires would soon equal out. There was a caution debris with 74 laps to go. Hendrick cars were still 1-4 and with 24 laps to go, Bowman completed his 1000th lap. With 17 laps to go, Bowman lapped Truex which was surprising as Truex is normally good at this track. When the checkered flag flew, it was still Hendrick cars in the first 4 positions. Bowman was the winner, Larson 2nd, Elliot 3rd and Byron was 4th. This was quite a feat for the Hendrick teams!

In the post race show, Larry Mc told us there would be practice at COTA (Circuit of the Americas) in Texas next weekend. Please check broadcast times and stations in your area for the practice. I also just learned that Harvick will be running in the Xfinity series at COTA. I look forward to that.

Thank you for reading and your comments will be appreciated.