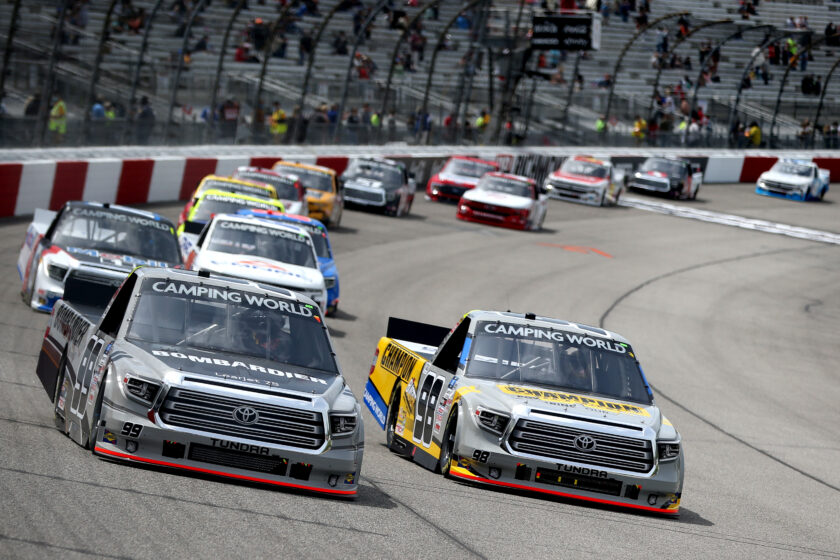 Short-track racing again this weekend. This time at Richmond Raceway for NASCAR Cup and Trucks. Also on the menu IndyCar season debut this weekend at Barber Motorsports Park. Lets start of with the Trucks!

The NASCAR metrics had put Ben Rhodes on pole with Austin Hill on the outside and Grant Enfinger behind Rhodes. Enfinger soon took over the lead and held on to win the first stage just in front of John Hunter Nemechek. Nemechek had started from p.18 after the incident last time, on the Bristol Dirt. Good to see short track racing without any cautions in the first stage.

Kyle Busch came out with the lead after the pit stops. However on the lap #99 restart John Hunter Nemecheck took over the lead from his” boss-man” Busch. After a couple of restarts in the beginning of stage 2, we got a longer green flag run, and Nemechek won the stage.

Lots of cautions in beginning of stage 3! John Hunter Nemechek led the most of the laps up until it was time for him to pit for his final set of tires and some fuel. With some of the “truckers” on different strategies, Matt Crafton led on the restart with 40 laps to go. Crafton soon got passed bye Chandler Smith. Smith held on to the lead until 17 to go when John Hunter Nemechek passed him and took home his second win of the year. Kyle Busch second and Tyler Ankrum, third. Finally a good run for Ankrum who have had lots of bad luck this year. Chandler Smith, fourth and Johnny Sauter finished fifth, Sauter also in need of a good result. Shout out of the week to Sam Mayer and the #32 team P.9 for a start up team is huge!! AND what was up with Jennifer Jo Cobb this time?! Involved in 3 incidents on the track this time. Not what we’re use to see from her. It did get her some TV-time before taking it to the garage.

What can one say about the Cup race. One mans misfortune is an other mans opportunity! Alex Bowman in deed did just that on Sunday. With less than 20 laps to go Kevin Harvick blew the right rear tire and hit the wall in turn#1. Bowman had a strong car and drove up threw the field after serving a tire violation penalty on the lap#240 pit stops. Om the restart with 12 to go Alex Bowman took the lead from Denny Hamlin and held of Hamlin for the remaining 10 laps. Before that there was only 2 cautions for incidents on the track. With the long green flag runs going on, leading was mostly an affair between Denny Hamlin, Martin Truex Jr. and Joey Logano for the most part of the race. For a full rundown of the race, just click here.

IndyCar and Indy Lights is making the series debut for the year at the beautiful Barber Motorsports Park near Birmingham. Alabama. I will take the opportunity here to give a shout out to Sweden’s Linus Lundqvist who won the first race and took second place in the second race of the weekend. Good luck Linus hope there is more to come.

At the first lap of the race Josef Newgarden lost the car and spun in the middle of the field collecting a number of cars. Among them who got involved was Felix Rosenqvist and Colton Herta. Rosenqvist had an eventful weekend at Barber, first, contact with the guardrail going in to the pits in practice. Followed by a spin in qualifying forced him to start at the back of the field. In the race Rosenqvist was at the wrong place at the wrong time.

With different strategies from the teams we had a couple of different leaders during the race. However the two fastest cars for the most parts of the race was pole-sitter Patricio O’Ward and the winner Alex Palou . And also good to see one of my old favorites, Sebastien Bourdais doing well in a fast AJ Foyt car. Marcus Ericsson had one of the faster cars in the beginning of the race. Sorry to say but on the last “money-stop” the team left Ericsson a little short on fuel. That forced Ericsson running the last, 30 or so, laps in full fuel-saving mode. Marcus Ericsson lost 4 positions but saved a P.8 while running out of fuel about 100 meter behind the finish line.