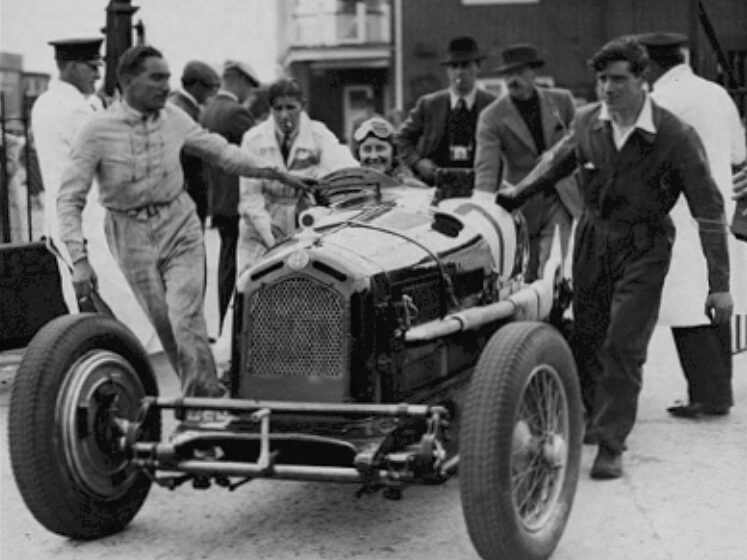 Back in my days as an irresponsible college student (as opposed to the irresponsible senior citizen some might say I am today), I was visiting a good friend at the school he was attending in rural eastern North Carolina, and he and his friends took me bar-hopping. I remember wearing an overcoat with huge pockets that allowed us to smuggle beers into the places with high prices.

At one place, we ended up sitting at the bar, where I had a pleasant conversation with the bartender, who also turned out to be the owner. “How’d you like ol’ so-and-so,” my friend asked afterward. I said I thought he was a fine fellow. “You know, he’s the head of the Ku Klux Klan around here.” I turned white enough that the guy could probably have worn me as a sheet.

Knowing the full story about someone certainly can change how you think of that person, and that leads me to today’s racing history story, which is about a fast racer named Fay Taylour.

When I was doing my research on short track racing in Richmond, Virginia, in the years following World War II, I came across Fay Taylour, who made a brief appearance in Richmond as the special attraction at a midget race scheduled for early November 1951 at Royall (later Southside) Speedway. The American Racing Drivers Club (ARDC), then one of the pre-eminent sanctioning groups in the East, was coming to town. Royall had been built in 1948 to race midgets but then switched to stock cars, so maybe the promoters were afraid that the lure of the quick little cars alone wouldn’t bring in the crowd. Adding a lady driver with pretty incredible credentials just might.

Things didn’t work out as planned. Early publicity said that Taylour would be involved in all the racing, but at the last minute that changed (via small print) to say she would compete in qualifying and would run a match race against one of the other drivers. Apparently, the ARDC wasn’t thrilled about the set-up and used the fact that she wasn’t a club member to deny her entry to the real racing.

Not a “club member,” indeed.

I did some checking on the fascinating history of Fay Taylour, who seemed to have spent much of her life being denied “club member” status – because of her gender.

To begin with, when she showed up in Richmond, she was almost 48 years old. You can decide whether that made the “Irish lass” or “colleen” used throughout the publicity campaign appropriate. Nevertheless, she could still race. She won her match race, the only real competition she was allowed.

Dig deeper, though, and you see Taylour starting out as a motorcycle racer in the 1920s and winning or at least impressing anyone who witnessed her racing in the British Isles, Australia/New Zealand, India – anywhere she was allowed to race. That is, until she wasn’t allowed, because she was a woman. Undaunted, she switched to cars and enjoyed considerable success in the 1930s, although sexism continued to be an obstacle.

To this point, she’s an incredibly sympathetic, heroic character, but then the picture darkens: During the 1930s, Taylour embraced fascism and became an outspoken partisan for Adolph Hitler. She was even part of a mass imprisonment during the war after another leading British fascist was caught spying.

After the war, she eventually moved to the U.S. to sell British cars in California – and to resume racing in the newly popular midgets. Obviously her publicists focused on her competitive past and not her politics. Sadly, extremist views seem to have remained part of her life until she died in 1983.

So what do you make of all this? Was Fay Taylour driven to her noxious political views by the constant prejudice she endured as a woman, or was she just both an incredibly talented athlete and a proponent of one of the worst political/governing ideologies ever hatched? Whichever, it’s a tragic story – and it’s one Richmonders likely knew nothing about when “Fast Fay” came to town in 1951.

Photos from The Vintagent, A Motorcycle Arts Foundation Production (www.thevintagent.com)