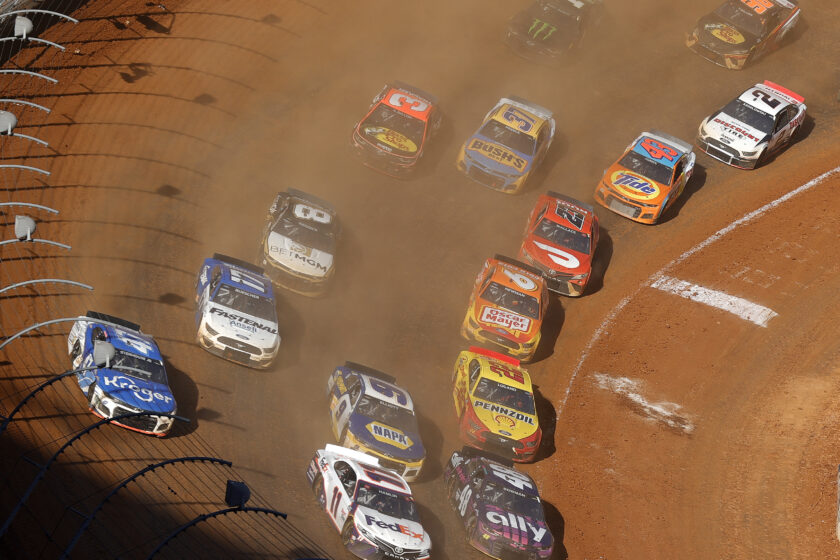 Bristol dirt weekend is finally here, some of you maybe have followed the progress of building up the track surface. One of the thing about this weekend I’ve been looking forward to was the Qualifying heats both in Truck and Cup. I know from previous years of Truck races at Eldora that the Qualifying heats are exciting and intense. Sorry to say but it would not to be this time.

But befor that both the Trucks and Cups cars hade two practice sessions on Friday. A few notes from Friday. I was happy to see Todd Gilliland hade fast truck with the best 10 lap average time first practice. Sadly JR Heffner driving the Jordan Anderson #3 truck hade a hard crash in the second truck practice and was forced to with draw from the event, another set back for for Anderson who have had a ruff start of the year, after finishing second at Daytona.

The track condition changed a lot during the Friday practices. The track dried out quick and became dusty as more and more laps was run. A look at practice speed shows it, almost 6 MPH differens in lap-speed between the first and second truck-practices. As the track conditions changed, and the tires worn out much quicker than expected. NASCAR made a “tweak” to the length of the stages in the Cup race. And also provided teams with two extra set of tires along with the necessary competition cautions for the teams to be able to change tires.

Saturday, NASCAR tried to get the qualifying races after Mother Natur soaked the track earlier in the day. Even after extra time for the track pacing vehicles the track not right, even if it looked to be raceable. So the first of the qualifying heat was called of after a lap due to mud clogging up the wind-shields of the trucks behind the leader. The track pacing vehicles where sent back out again but soon after that the rain hit the track and flooded the Bristol area, making it to a Monday double header races, for Trucks and Cup.

With the fields set by the NASCAR qualifying metrics for both Trucks and Cup, we had John Hunter Nemecheck on pole for the Truck race with Austin Hill on the outside. Sheldon Creed soon took over the lead and we got to see some Great racing amongst the top five, six trucks. Martin Truex, Jr hade started a bit back, P15, hade a very strong KMB truck and before the end of the stage Truex, Jr hade taken over the lead.

At the start of Stage two Stewart Friesen and John Hunter Nemecheck had opted for track possession and stayed on track at the pitstops. It didn’t take long befor Martin Truex, Jr was back in the lead, and from that point on it was over no one hade anything for the #51 team. A few laps later John Hunter Nemecheck was involved in an incident with Matt Crafton, that left Nemecheck spinning to the outside wall. The #4 was sitting waiting for the field to pass, when for some reason Derek Kraus lost control of his truck and hit Nemechecks truck, ending both there days. And later on Kyle Larson crashed his truck after spending most of the race mid pack, there wasn’t really anyone who could challenge Truex, Jr in the end, even if Ben Rhodes, Raphael Lessard and Todd Gilliland Did there best trying to catch the winner, Martin Truex, Jr. Shout out to Parker Klingerman, always doing well in the #75 truck, P.8 this time.

Kyle Larson would have started at the pole in the Cup race, but was forced to start at the back due to an engine change. So it was Denny Hamlin who took the lead but his teammates Kyle Busch manage to lead a few laps befor Martin Truex, Jr took over the lead and held on to it for 126 laps. Truex, Jr survived numerus of restarts until Daniel Suarez passed him to lead the next 58 laps. In the end it was Joey Logano who had the strongest car and had the set up under it to hold on to the lead and also survive a NASCAR overtime.

What can we take away from this Dirt-weekend at Bristol? Well, I think the racing was quite good from times to times. But the conditions of the track went from almost to wet at the start of the race to way to dry and dusty at the end. NASCAR was fo0rced to go to singel file restarts in the third stage, due to problems with visibility. Kyle Larson who was one of the favorites to win was involved in an early accident along with Christoffer Bell. Amongst the “Dirt-ringers” it was Ricky Stenhouse, Jr, who had his best finish of the year with a second place, Denny Hamlin in third, Daniel Suarez, fourth and Ryan Newman rounding up top five.

During the broadcast it was announced that this event will be back next year. Lets hope NASCAR will have better luck with the weather and learned some from this event. I’m living in a country far away from Bristol Motor Speedway and don’t know to much about Dirt-racing and what to do to improve the event. So here’s a little reading tip from some one who have more knowledge that I have. (klick here)