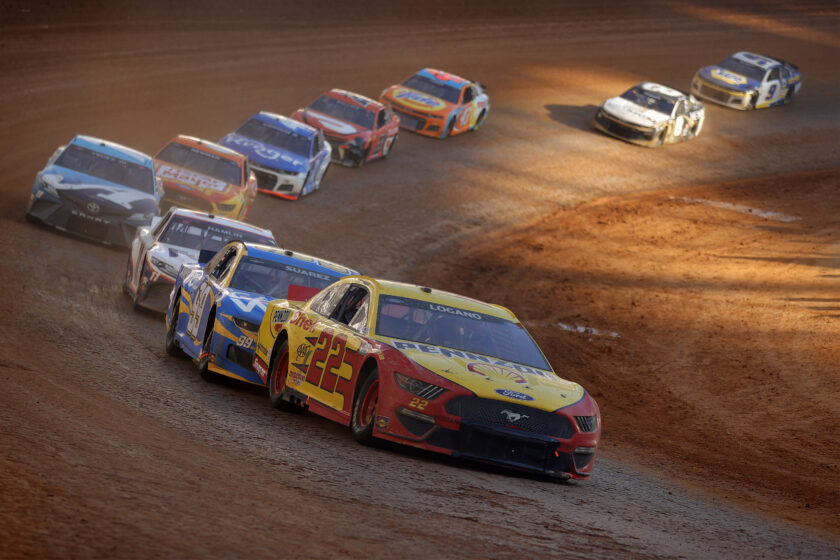 The Invocation was first and then came our National Anthem which was sung with great reverence and correctly. I did not get the name of the singer, but kudos to Bristol for choosing him.

In the booth were Mike Joy, Jeff Gordon and Clint Boyer. Their excitement showed and they expressed how great it was Cup cars would be on dirt for the first time in 50 years. On pit road were Jamie Little, Regan Smith and Vince Welch. They advised us that the teams could only change tires on the stage breaks.

Stage 1 started and FOX gave us an overhead shot of lap one. This was great as we could see how the drivers were getting around the track and how some were moving up and others were holding steady. Clint, Jeff and Mike talked about how Logano was moving up through the field. A short while later, Kyle Busch went to the pits to change the radiator screen as it was totally covered with mud. They told us he lost a lap in the process. They brought Larry Mac in to show us the radiator screens they used and how they used velcro so they could pull them off quickly and replace them. On lap 41, there was a crash and caution came out. They changed it to a red flag so they could clean the area. They explained that Almirola in the #10 car had hit a dirtle or silly bump, the little bumps on the inside of the track. During this time they gave us a report on 3 cars that started at the back and how they were moving up through the field. After they restarted, Mike told us that Truex had just completed his 10,000 lap as a race car driver. This was very interesting. Under the next red flag, they told us there were no safer barriers because they don’t work on dirt. Jamie and Regan gave us a tire wear report. After racing was started again, Truex won stage 1 by almost 3 seconds over Byron and Hamlin. Jamie gave us a good report and told us that they completely stopped and were allowed to do more on these stops compared to the stops in regular races. We were also told that Truex had more stage wins than anyone else.

Stage 2 was going well, as usual. There was a competition caution on lap 150. Again, we got a tire report and were told Reddick’s tires were best at this time. They restarted and it was mentioned there was no choose zone on the dirt. Then, there was another crash. We were told it was almost impossible to see anything and we were given a list of the cars involved in the crash. At this time we were told they would be starting single file for the rest of the race. This was probably a good idea, this scribe thinks. It was discussed in the booth that Suarez was very smooth on the throttle. Possible throttle stop, they mused. Then Larry Mac talked about how the ECU worked. Logano took stage 2 and they were joking again about Blaney being in the booth the day before the Cup race in Atlanta, and then winning. Maybe this was a trend, and possibly Logano being in the booth for the truck race at Bristol, would help him win the Cup race.

Stage 3 was ready to start. They had watered down the track again after stage 2. Hopefully, this would help the racers and we would have less dust and cautions. They informed us that the spring race at Bristol in 2022 would once again be on dirt. Mike told us there were 28 cars on the lead lap and that this was the first Cup race on dirt in 51 years. I don’t know how it got changed from 50 years to 51 during this race. They talked about saving tires, then Hamlin hit the wall and they explained that there was no grip up top. We had a caution with 4 laps to go in the race. Booth told us Truex just might win yet. They started the race again and Logano took the lead and the race. Yep, after being in the booth the day before, Logano won just like Blaney did at Atlanta after he was in the booth the day before. Stenhouse finished 2nd and Hamlin finished 3rd. Something that made me smile big time was just like Blaney did at Atlanta, Logano went up to fence and picked a young fan to give his checkered flag to. I love that gesture.

I thought it was a very good race and the broadcast was well done. The booth had fun and showed excitement; and that is a good thing. The pit road reporters gave us very good updates and as a fan, I appreciated that. For this broadcast, they all deserve an A-.

Thank you for reading and your comments will be appreciated.