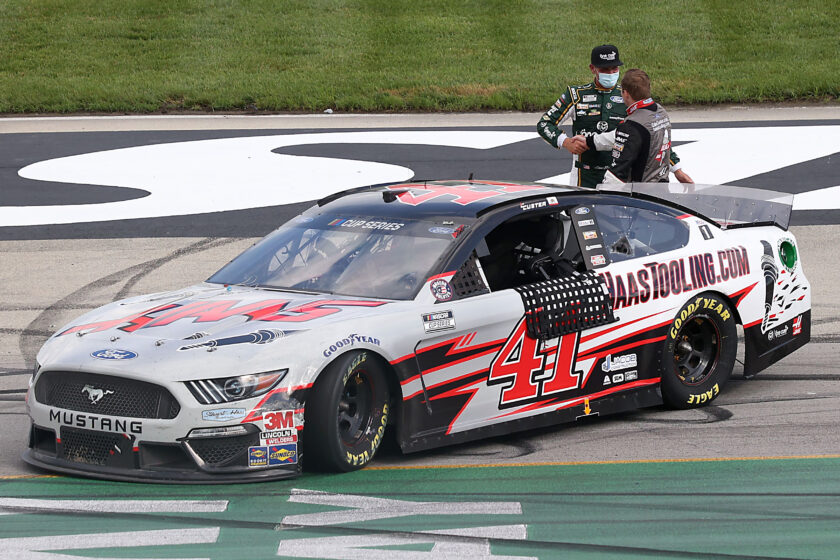 We won’t see Cole Custer’s Crew Chief, Mike Shiplett at Sunday’s Instacart 500 from Phoenix Raceway. During post-race inspection, NASCAR found two loose lug nuts on Custer’s #41 Ford Mustang. As a result, Shiplett was hit with a $20,000 fine and was suspended for the Phoenix race.

$20,000 is a sizable financial hit for most and would get most people’s attention. But how about the suspension, being forced to miss a race? What kind of penalty is that really? How much of a deterrent is suspending, or ejecting a Crew Chief from a race?

Shiplett’s suspension reminded me of a conversation a racing buddy of mine had last year before the Texas race when we discussed the same subject, but it was on the ejection of Martin Truex, Jr.’s Crew Chief, James Small from the race.

He asked me the same questions – What kind of penalty is a Crew Chief suspension or ejection? How much of a deterrent is it these days?

As you recall, it was at the fall Texas race. Martin Truex Jr. was in the Round of Eight and looking to advance to the Final Round of Four and a shot at the 2020 Championship at Phoenix. During pre-race inspection, NASCAR found an unapproved spoiler on the #19. NASCAR generally frowns on such findings and penalties were immediate and on the surface severe. NASCAR’s penalties included –

Like Shiplett, part of the penalty was Small had to miss a race. All pretty severe stuff considering the timing in the season, two races from the Final. I felt that losing Small for this race was as harsh of a penalty as any piece of the overall penalty.

My buddy asked me…Really? And then had me look beyond the “flash” and hype to find the substance of NASCAR’s actions, the real impact sending Small home for the race had on the team.

As the race (a multi-day affair) unfolded, he had me watch for the impact of the penalties on Truex, Jr. and the team, especially, James Small’s suspension. We I saw was

So some penalty, huh?

Afterwards, my friend explained that at one time, that “back in the day” (BITD) “losing” your Crew Chief might have had a major impact, but that’s no longer the case. It’s now more “flash” than effect. It sounds “impressive” and makes NASCAR look like they had really dropped the hammer on the team, but not in this day and time.

So what did ejection really mean?

We won’t know for sure in Shiplett’s case until it unfolds on Sunday, but like James Small he can’t be at the track. But as my friend pointed out, in Small’s case it was hardly a bad thing as we talked through the unintended consequences of the current rule.

Small didn’t have to deal with the mist and the rain and the cold that settled in at Texas for day after dreary miserable day until the race finally ran on Wednesday. No, he could go home. Warm and dry. Sleep in his own bed. Get rested up. While all the other crews and their personnel were thrashing in Texas and having their schedules all jacked up and having to hustle back to Carolina afterwards, the ejected Small was on his regular schedule and could go to the shop with a three-day head start on the others.

When the race finally rolled off Wednesday, he could go to the Toyota War Room (which I suspect the SpaceX Mission Control probably pales to in comparison) and in the warm and dry and in the comfortable confines away from all the action of the track, he could watch the race unfold on the TV displays and computer monitors. He could analyze all the data streaming in from the track and process it just like he does at the track but without all the distractions. He may have even had the opportunity to make a phone call or two to Brian Harris with a few suggestions along the way.

Not saying that that happened mind you, but ejection was hardly a penalty. Actually, it is probably the next best thing to bring there… maybe even better.

After remotely guiding his driver to a second place finish, Small, unlike his competitors who were now wrapping things up at the track, tearing the circus down to load it up, get away and get it back halfway across the country, James probably just got another cup of coffee, moseyed back to the shop, got a few more hours of prep time in if he wanted. Or headed home, got some rest, so he could wake up fresh on Thursday while his competitors were dealing with jet lag and the wear and tear of a race and late night travel. The #19 with their ejected Crew Chief actually went into Martinsville in better shape than those compliant teams.

Will Shiplett be similarly “penalized”? We’ll have to watch and see as only time will tell.

Bottom line-expelling a Crew Chief for severe rules violations or suspending them from attending a race may have meant something BITD before all the steaming data and instantaneous communication now available, but as my friend reminded me that there was a time not long ago when a Crew Chief had to be at the track to be effective, but those days are long gone as is the impact of Crew Chief suspensions.

Now, Crew Chiefs no longer have to be at the track to get the data first, analyze it and make their experienced call. With all the data available at their fingertips and with all the analysis going on by the squad of team engineers, he can probably make better decisions away from the track than he can atop the pit box.

So where’s the penalty now? “Ejected” and “Suspended” sounds big and bad but is it really? In these changing times how do you put the “bite” back into the penalty?

Good question. When I posed it to my friend, his one-word answer surprised me as it was something we are all very familiar with in dealing with this COVID pandemic…

Quarantine would mean that on race day, at race time, a suspended or ejected Crew Chief would have to report to the NASCAR Research & Development Center, turn over all electronic communication devices and be placed “Quarantine” for the duration of the race.

Just the way it was originally intended.

To ensure proper execution of the penalty, once the race starts and Quarantine is imposed, the Crew Chief would have no direct contact with the monitoring NASCAR employee. Those Crew Chiefs are crafty rascals. No need of giving them the opportunity to talk the monitor out of their cell phone, get a squint at or listen to the race broadcast.

In order to preserve an appropriate level of dignity Quarantined Crew Chiefs won’t be forced to sit in the corner with their back to the room while wearing a “Dunce” Cap. No, that comes when you get caught a second time.

When the Checkered Flag drops, Quarantine is over. Crew Chief life returns to normal as the NASCAR monitor returns the Crew Chief’s electronic devices and they are free to go, free to go back to their “War Room” analyze data, review tapes, make notes and do all the other things Crew Chiefs do during their post-race analysis.

But for the duration of the race, during Quarantine, the Crew Chief has been removed from the racing equation in a simple and straightforward manner. The team was penalized by his total unavailability during the race. The original “bite” of the suspension/ejection penalty and its intended deterrent impact is once again restored.

With Quarantine, unlike what passes as a ejection/suspension penalty today will now carry a “truer” penalty. In a day and time when separating people from their electronic devices approaches cruel and unusual punishment, Quarantine might just make Crew Chiefs think twice about how far they are willing to push things as they weigh whether the Risk truly outweighs the Reward.

Isn’t that what it’s all about? Isn’t it worth a shot?

2020 was a year of NASCAR experimentation. Though better equipped in 2021 to deal with the curveballs the virus has thrown us all, 2021 is probably going to be a continuation, with plenty of opportunities for NASCAR to experiment in other areas.

There has never been a better time to add Quarantine to penalties that involve Crew Chief suspensions and ejections.

Think about the impact that little change might have on Cole Custer’s chances as you watch the race Sunday.

Don’t want to put words into anyone’s mouth but betcha James Small is glad NASCAR didn’t do this last season.

Betcha Mike Shiplett is glad that it’s not in effect this season. He’s probably glad he’s still free to watch the race from the SHR “War Room” and will be able to still provide input, albeit 2000 miles away from the #41’s pit box.

For those reasons, Quarantine’s time has come.

Till then… Thunder on and Stay Safe