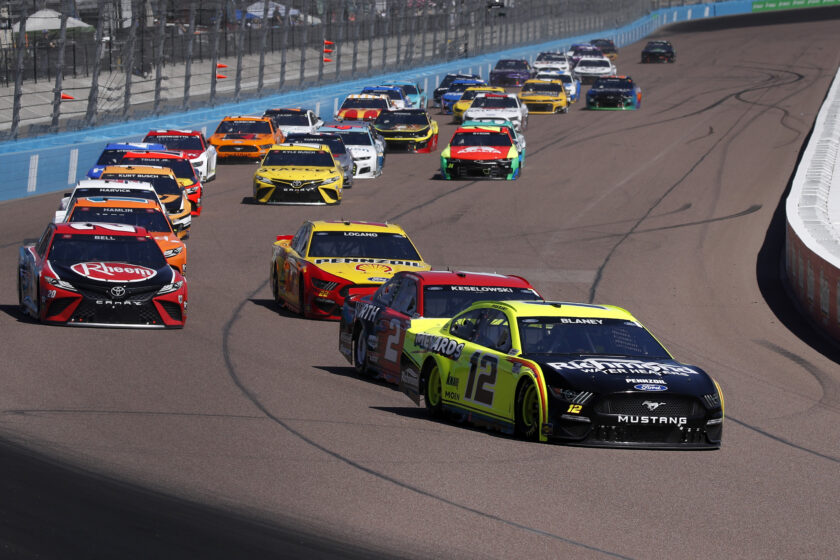 I mean, with the way the track’s designed it offers multiple grooves and opportunity for a lot of passing. And then you have the addition of the Traction compound, PJ1, and the way it comes in or eventually wears out. But still for most of times , things seems to settle in three or four laps. Everyone started racing there preferred line and waiting on an opportunity at the next restart. Maybe Daniel Suarez who was in the FS1 booth, was right when he said “this thing races almost like a mile and a half”. One thing is for sure this was the least exciting races of the year so far.

In Saturdays Xfinity race reigning champion Austin Cindric picked up where he left off in November, starting from third he had taken the lead befor the first lap was in the books and held on to it until the pit stops after the Stage 1 break. Due to the tire allotment, only three sets, almost no one pitted on the competition caution except Gray Gaulding and Ryan Vargas, from what I could tell. So there was no mix up of the field there. Maybe time to do away with that caution, especially in the shorter races.

Daniel Hemric came out with the lead after after the pitstops and looked to have a strong car and held on to the lead all the way thru Stage 2. Austin Cindric lost a few possessions on pit-row and when Cindric’s car got sprayed with oil from the car of Noah Gragson, as the motor blew up, Cindric got shuffled further back in the field! Daniel Hemric manage to hold on even during a couple of restarts to take home the second Stage.

On the restart Justin Allgaier took the lead and held on until the next caution. While early leader Daniel Hemric fell back due to a car that was to loose. Hemric speed on pit road at the caution on lap 125 and was forced to start at the back. After the pit stops, it was “go-time” for the teams with 70 laps to go. And with a bunch of cautions and shorter green flag runs took us down inside 30 to go before we got a bit of a longer run.

However, inside 10 laps to go the #36 of Alex Labbe went around and hit the outside wall for the 11th and final caution of the day. And with the restart with two laps to go Daniel Hemric, who was helped by a lot of restarts, chose to start on the inside of the leading Austin Cindric. On the restart Hemric got loose and eventually slapped the wall and finished out of the top 20. Austin Cindric went on to win and Ty Gibbs who had started a bit down in the field had manage to stay out of trouble came in second. Hats of for third place Brandon Brown – great finish for him driving for his family team. We also got to give a shoutout to Bayley Currey in eight and Jeremy Clements in tenth.

For the Cup race Brad Keselowski started on the pole with Christopher Bell on his outside, after the car of Kyle Larson and William Byron was sent to the back after multiple inspection issues. Chase Elliott also had to go to the back of the field for unapproved adjustment. Keselowski held the lead on the start after have dived way down to the apron into turn 1. Denny Hamlin soon took over the lead and checked out to a 1.5 second lead when the competition caution came out. On the caution Martin Truex Jr‘s pit-crew got to work after Truex Jr had tagged the wall earlier with a not to good of a handling car.

For the rest of stage one and until the end of stage two it was an all Penske affair except around the the green flag pitstops in the middle of stage two where we hade a few different leaders. Corey LaJoie hade an interesting strategy going, staying out and leading laps. Having pitted on the lap 90 caution LaJoie tried to make it to the stage two end but eventually had to give up when running low on fuel. Joey Logano led the most laps of the day,143 of 312, and won stage two. While his team mate Ryan Blaney had won stage 1.

Last stage started with Logano taking the lead and Martin Truex Jr closing in, around the middle of the greenflag run and taking over the lead. From there on it was Truex Jr and Logano who had the strongest cars at the end of the race. Kyle Larson was coming on strong with out making it all the way to the lead.

On the final restart of the day Martin Truex Jr took the lead from Joey Logano and with the two best cars of the day running one and two. With there team mates Denny Hamlin and Brad Keselowski behind, no one came close to the leaders.

It is good to see when a team can get to work and sort out early trubbels and turn a ill-handling car into a winning car. Not to much else to say about this race other than Kyle Busch once again had a lot of trouble and finding the wall on several occasions. And Kevin Harvick again found his way into the top ten without having anything for the leaders. To sum this up; We have had 7 pit road speeding penalties in the first four races this year. This time we had eleven speeding penalties, with Kyle Larson having two of them.