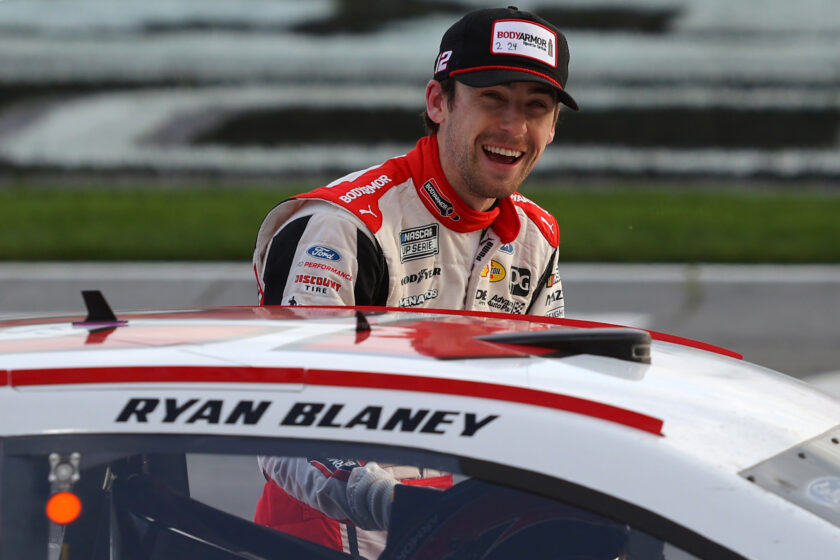 When Kyle Larson passed Ryan Blaney for the first green flag Racing Lead Change on lap 237, the Folds of Honor 500 from Atlanta Motor Speedway looked over.

This was the 10th Lead Change for the race… Larson’s fifth for the day. He had led almost 80% of the race up to this point – a whooping 189 of the 237 laps. He had won Stage 1 by seven seconds and had put 20 cars a lap or more down. He took Stage 2 with an eight second win, putting another five a lap down by that point.

It was time for him to finish the deal.

Larson led the next 33 laps only giving up the lead to pit for tires and fuel giving the lead to Kurt Busch. Three laps later the pit stop cycle would be complete and he would be back to the point for another 40 laps and the Stage One win.

Ryan Blaney did beat him on the restart after the caution for Kurt Busch’s misfortunes, but that was short-lived as Larson took the lead back the next lap and held it another 41 laps until the next round of green flag pit stops forced him into the pits, giving the lead over to Daniel Suarez. After Suarez pitted from the lead on the next lap it was Larson back in front for another 50 laps and the Stage Two win.

Blaney would win the race off pit road after Chase Elliott’s caution for fluid on the track-a lead he would hold for 12 laps after that restart until he had to pull over for trash on the grill allowing Larson to get back to the lead on lap 237 for what appeared to be the final time.

Eighty-eight laps to go and nothing in front of him but the Checkered Flag… or so it seemed.

For the next 80 laps, Larson held the only position he had known for now 84% of the race-the lead. But this final run would be different. Instead of Larson running off and hiding with embarrassing leads of seven seconds of more, he was unable to get more than a couple of seconds ahead of Blaney

With Larson’s tires fading at the end of the longest single green flag run at the front, coupled with a little dirty air off of the Joey Logano car who was fighting to stay ahead of Larson and stay on the lead lap, Ryan Blaney was able to complete the last Racing Lead Change of the day, passing Larson on lap 317.

Now on the point, Ryan Blaney was able to hold on for the final eight laps to the Checkers for a 2.083 second win, the fifth of his career. He is now the sixth winner this season and finds himself in the Playoffs with Michael McDowell and company as the “win, you’re in” list continues to grow.

That is how the Folds of Honor 500 went down on Sunday… let’s see what the numbers say.

Had it not been for Ryan Blaney making the pass for the win with eight laps to go, there would be little to talk about numbers-wise as Kyle Larson dominated nearly every category.

Leaders-the few at the front

There were six leaders in Sunday’s race. Larson led five times for 269 laps. He was passed once in the pits, once on a restart and then the fateful final pass for the win all by Ryan Blaney.

Other than that, Kyle Larson was untouchable.

There was a paltry 11 lead changes this race compared to 20 and 25 lead changes in the previous two Atlanta races. Two lead changes occurred under cautions as Larson and Blaney’s crews put each out front, winning the race off. Of the remaining nine green flag lead changes, two took place during one of the race’s five restarts and five were “Strategy Passes” occurring during green flag pit stop exchanges.

The final two lead changes for the race were “Racing Lead Changes” or Passes on Track. These occurred on track, under green without benefit of bunching of the field on restarts or leaders pitting from the lead under green. Two “old-fashioned” racing lead changes – I have the lead and you pass me.

Loop data-green flag passes, quality passes and all that stuff

To put it in perspective, of the 278 green flag laps not involved in starts or restarts, only two resulted in the a change in the lead as a result of one competitor passing another – in this case, Larson passing Blaney on Lap 237 and Blaney passing Larson 80 laps later on Lap 317.

Not sure where that registers on the Excitement and Drama meter for the day.

On the Lead Lap-a few could keep up

In addition to the three mandatory cautions, there were two additional cautions. Both occurred early in their respective Stages and had little impact on the outcome of the race. Without the benefit of numerous restarts, free passes and wave arounds, only fourteen cars were able to finish on the lead lap.

Margin of Victory-the race’s was better than the Stages’

These palled in comparison the margin of victories Kyle Larson put up in Stages One and Two.

If the race had been the Folds of Honor 488, Kyle Larson’s dominating win would be all we could talk about today.

However and thank goodness it was eight laps and 12 miles longer as Ryan Blaney’s pass for win on Lap 317 gave the race a finish that kept it from being a snoozer.

I just hope fans didn’t exit early and miss the finish or all they got to see for the day was the #5 car running in another zip code for .

We’ll be back here July 11th for the “Quaker State 400 Presented by Walmart Formerly Held @ the Kentucky Speedway” (sorry about the last part – I couldn’t resist). Not that it matters, but let’s see if that race is better than previous races at Sparta.

‘til then –it’s on to Bristol to get a little dirty this weekend.

Thunder On and Stay Safe