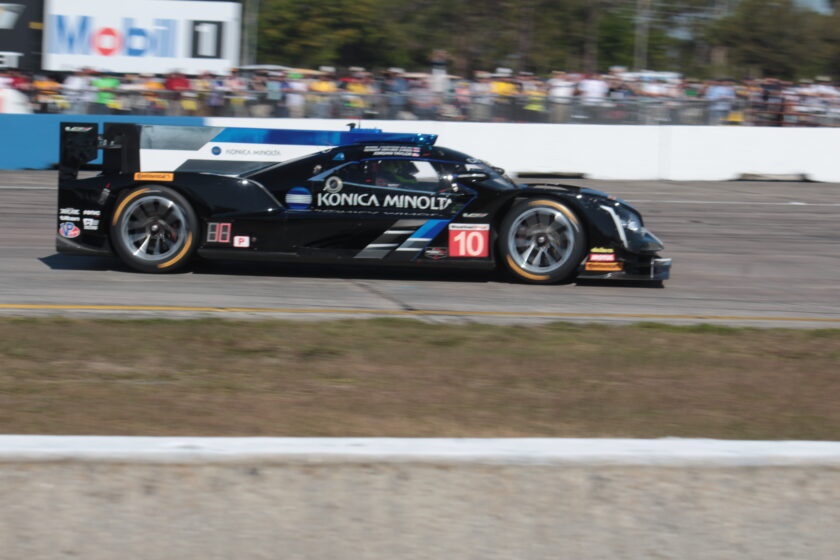 The Rolex 24 h at Daytona was my first ever IMSA race on Swedish television. Luckily, I could record that race for the full 24 hours for watching later when I had the proper time. The IMSA and WEC endurance Series have not been a priority for Swedish television broadcasters in the past. But when internet TV made it’s debut to the broad public viewers something changed for us sports fan. We could now see sports and events like never before – and from all over the world.

My twelve hours of Sebring build up, or “pre-race preparation” to the green flag at 15.10 (10:10 AM) was with my family at home and a beef lunch with a few drinks on the side. I was all “pumped up” for the green flag to wave and hear the engine roar on the 6,02 km (3.74 mile) 17 turns at the classic Sebring track. It was time for 69th Annual Mobil 1 Twelve Hours of Sebring!

For a new fan of endurance racing the different classes can be a bit confusing in the beginning. I had a new guest on the sofa for the green flag, who had never watched racing on TV in his whole life. It was a challenge for me to try to explain all the race classes and color codes on the cars for him, but I slowly managed to get him into the rhythm of endurance racing and what it’s all about. Baby steps you know…

Some memories from the race

I will not try to recap the race here. There is plenty of that around online already and frankly, twelve hours is a long race to recap. I do remember some interesting highlights that are still on my mind, even a couple of days after the race.

The first thing was the green flag at the start of the race. Their were penalties handed out directly for some cars after false starts. That’s how hungry the drivers are, even if it’s a twelve hour race.

The first full course caution was due to Jimmie Johnson in his #48 Cadillac Dpi car. Jimmie hit the curbs to aggressively and lost the car. As a long time NASCAR fan, I have followed Jimmie Johnson’s progress in the Dpi car, both this race and the Rolex 24h race. I must say that Jimmie’s driving at Sebring was a step in the right direction. Of course his team mates, Kamui Kobayashi and Simon Pagenaud are in a different league and should so be with their experience at road courses and in prototype cars, specially the Japanese superstar Kobayashi. The #48 car came in third after a last lap exciting battle against the #55 Mazda Dpi car (Oliver Jarvis/Harry Tincknell/Jonathan Bomarito) that finally took the second place. Strangely enough, the #48 car was disqualified because of to many driving hours by Pagenaud behind the wheel. How could the #48 team miss that…?

The winner of the Dpi class was, in my mind a surprise, the #5 Cadillac Dpi car with Loic Duval, Sebastien Bourdais and Tristan Vautier behind the wheel. A well performed race by the #5 team and the margin to the second place car was only 1.435 seconds. That’s how close they are after twelve hours of racing.

There was another battle on the track that I still have on my mind. The battle for the lead between the the two GTD cars of #16 Porsche 911 GT3R (Patrick Long/Trent Hindman/Jan Heylen) and the #14 Lexus RC F GT3 (Jack Hawksworth/Kyle Kirkwood/Aaron Telitz). The two cars battled each other for lap after lap for a long long time and it was so exciting to see this awesome racing between the Lexus and the Porsche. When this battle was raging, the time clock was around over nine hours left…that’s is the beauty with endurance racing. The winner of the GTD class was the #36 Porsche 911 GT3R car with Laurens Vanthoor, Lars Kernand and Zacharie Robichon at the wheel.

From the Swedish perspective then. I’m was keeping an extra eye on the #38 Ligier JS P320 car in the LMP3 Series with young Swedish driver Rasmus Lindh and his team mates Dan Goldburg and Mateo LLarena. Rasmus did the first stint, a very long stint and he had a very comfortable lead when he got out of the car. Unfortunately, the #38 car did get involved in some accidents later on and never recovered from that. The same scenario actually was the case for the #38 LMP3 car at the Rolex 24 race at Daytona. I do hope that the #38 team can get some luck for the next race.

In endurance racing, the pit crew have a challenging time as well. They too need to rest, eat and relax when they have the chance. It’s amazing that they can change the complete brake system including discs and calipers on the pit road. The heat is enormous on the brakes and to directly change these on the pit road is a tricky hazardous thing.

Endurance for the race fans

Endurance racing is also a challenge for the “die-hard” fans that watch the race from start to finish. And here I mean to actually be present and watch the whole race live. Not take a break for resting, cook a meal in the kitchen or walk the dog. I did this for the first time, all twelve hours. For an early sleeper like me, it was sometimes tough to stay awake and alert the final three hours after midnight (Swedish time) but awake I was.

But endurance racing like IMSA or WEC never gets boring. This is because there is always something going on the track. You have different classes who drive with different speeds, and this gives you interesting passes everywhere on the track. Each class has their own battles on the track. The Dpi class cars are so much faster, and their drivers need to pass other cars all the time, and that is thrilling to watch.

This is, for me, the ultimate racing experience, almost magic… Thanks for reading.

Full result from the Twelve Hours of Sebring – click here.