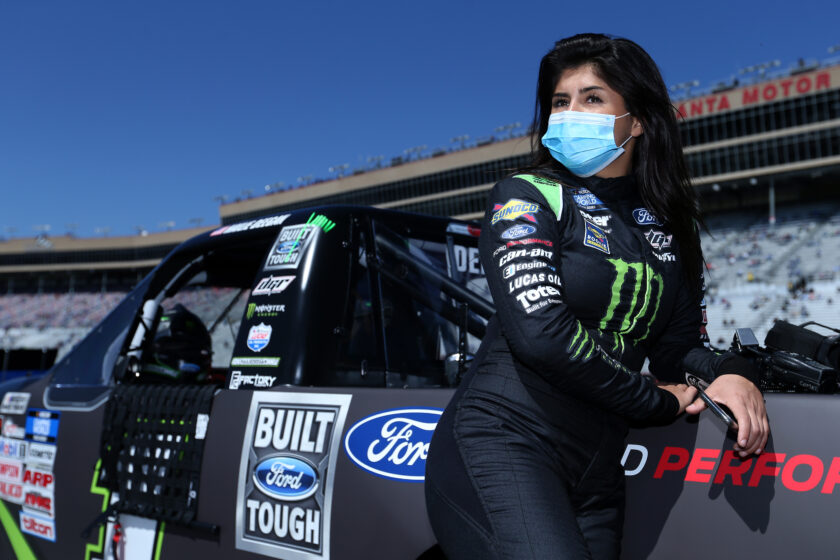 I was looking forward to the Atlanta weekend and the racing in all three top NASCAR series . Atlanta can sometimes provide some exciting racing. We have had two good raceweekend on 1.5 milers already this year, so I was excited what this weekend would bring.

This weekend again Marcus Lemonis of Camping World Group put some extra money up for the trucks. This time featuring the Overton’s brand. At the start of the race we had Toyotas in the three first rows befor the first GMS Chevrolets and the first of the Fords Todd Gilliland started in ninth place. Matt Crafton manage to take the lead away from John Hunter Nemecheck, who started on pole. Crafton held on to the lead for a few laps befor Kyle Busch took over. In the beginning of the race the Niece trucks of Brett Moffitt and Ross Chastain seems to be very fast coming almost flying up true the field. But ones the two Niece trucks came inside the top ten they settled in.

With few restarts and the very strong KBM Toyotas up front The only truck that in the end run with the KMB duo up front was Austin Hill who came in second but name nowhere near Kyle Busch. John Hunter Nemecheck Came in third and the “usual bunch” rounding out top ten. With that said I’ll give my shout out of the weekend to the third Niece Motorsports car driven by the youngster Carson Hocevar, P 12 and on the lead lap is a result to be proud of, on a day where the KBM trucks lead all but seven laps. Yeah that’s right Crafton led the first three laps, and Chase Purdy four laps, by applying some pit-strategies at the stage three green flag pit-sequence.

In the Xfinity race Austin Cindric was on pole with Jeb Burton on his outside. From what we learned at the truck race the inside line is the line to be in on starts and restarts. So it was Austin Cindric to the lead. however Martin Truex , Jr came storming to the front after starting back in P.18. Truex, Jr soon took over the lead and checked out, to win the stage. Martin Truex, Jr even survived the one lap shoot out after the spin of Dexter Bean. While some of the other didn’t as things got a little bit to tight on worn out tires and everyone tying to get as much as they could.

For the start of stage 2 Brandon Brown hade the lead after he had made his pitstop after the lap 37 caution. It didn’t take long before Truex, Jr was back in the lead and sailed away with Justin Allgaier a couple of second behind. On lap 114 everything changed when Mason Massey spun around the #99 car and the caution came out.

On the pitstops following the caution a series of event change thing around some of the drivers. Mason Massey had limped the #99 car back into the pits to change tires. However the #99 hade entered the pit stall in an angle and that made hard to get around it to and enter the pit-stall for Daniel Hemric. Hemric drove a bit into the pit-stall of Noah Gragson. Gragson had to wait until Hemric had backed his car away from the #9’s pit-stall. Then the over-enthusiastic kid in the #9-car over shot his pit box and totally lost it when backing up into the Hemric car! Not the smartest move by the Gragson kid, Hemrics crew had the car up on the jack and working on it. We can be happy things didn’t turn out worse. Meanwhile Martin Truex, Jr speed on pit-road and had to start at the tail-end of the field.

On lap133 Ryan Sieg got loose underneath Josh Berry and tapp the rear corner of the #8 sending him around. Berry saved the car from hitting the wall and almost hade it saved when hitting the grass at the pit-road entrance. The edge of the grass was a bit higher than the paved part of the in front of it and the car dug in and destroyed the front of the car. One thing is for sure Gras on the front stretch needs to go away to be replaced wit some kind of synthetic turf, now day there’s plenty around to choose from if not els use the same kind that are in use at Charlotte.

Well at the end of the race Justin Allgaier held of Martin Truex, Jr who maybe used up a little to much of his car going up true the field. Jeb Burtons top ten streak came to an end after having some contact with Jeremy Clements and having a tire going down. Shout out to Landon Cassill, Santino Ferrucci and Josh Williams this tim P. 14,15 and 16.

I’m not going to dig to deep into what was going on in the Cup race, other than maybe a note or two. Our David Nance has an extensive review of the Cup race at Atlanta. (Here)

My first note, we have seen some the Hendricks cars having issues with unapproved adjustment and multiple inspection issues. The HMS cars has been very fast in the beginning the season and vinning races, so I took a quick look on that number. If we don’t count Daytona 500, where most of the car that was sent to the back due to going to Back up cars. So far 14 times cars been sent to the back after inspection, 5 of them was Hendricks cars. The only conclusion one can make from that is maybe a Hum!

We have had a total of 24 pit-road speeding penalties so far this season,. Of those 24 penalties 17 of them has came in the last two races. Last years Speeding on pit-road Champion Quin Houff received his first of the year last weekend.

Normally I like a racetrack who produces some degree of tire wear. However, Atlanta Motor Speedway is maybe beyond that point. I mean the track surface is now so abrasive that even a lap has an impact on lap-times and with that there’s no other strategi for the Cup teams than 4 sticker-tires every time!