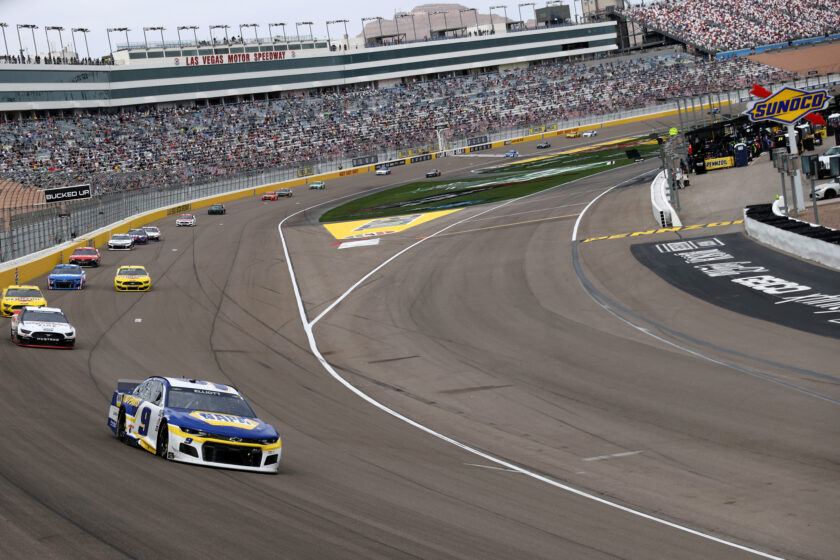 The NASCAR Cup race at Las Vegas Motor Speedway turned out to be a pretty good race. I had watched both the Camping World Truck race and the Xfinity race prior to the Cup race and thought the Cup race really had possibilities of being a good one. John Hunter Nemechek won the truck race on Friday night and A.J. Allmendinger won the Xfinity race on Saturday. Both of those were good races.

Stage 1 of the Cup race started off with excitement as the cars were bunched up and it was not long before they were running three wide. The announcers seemed to get hyper about the racing as they were describing what was happening on the track; not a bad hyper, but a fun hyper. I think Jeff and Clint are good together.

Kevin Harvick had been the pole sitter, but he started dropping back after the first lap. William Byron took the lead and lead the first 19 laps but was passed by Chase Elliott on lap 20 and Elliott led until the competition caution on lap 25/26.

Hamlin came out in the lead on lap 31 and Elliott lost 6 spots during this caution. I like Ryan Blaney so was watching his progress. He had started 26th but was moving up quite nicely until he felt a vibration. Kyle Larson had taken the lead on lap 45 and they were starting to get strung out a bit. About that time they threw a caution for debris on the track and this helped Blaney and Harvick, as Harvick had a left front flat. Larson stayed on the track during the caution, but after the restart, he started to fall back some when they started going 3 wide again. As the laps began to count down, there were several leaders: Logano, Elliott and Keselowski were the prominent ones. Blaney had moved up to 3rd but Harvick was not doing as well. Kez took the stage 1 win, with Elliott 2nd and Blaney 3rd

Stage 2 started with Hamlin in the lead and Kez a close 2nd. By lap 7, Kez had taken the lead with Blaney 2nd and Hamlin back to 3rd. This stage was looking promising for some good racing. Racing was going well and they had green flag pit stops starting on lap 124 to lap 135. There were 4 cars that did not pit during this time so they were in the lead for a while. After they finally pitted, Larson took the lead again and won stage 2 with Kez 2nd and Hamlin 3rd. It was a rather quiet stage and there were no cautions

Stage 3 found Hamlin coming off pit road first so he was on the pole for the start of this stage. Larson came out 2nd and Harvick, who I had been watching through the 1st and 2nd stages, came out 13th while Blaney came out in 8th position. Kyle Busch had been quiet up til now but all of a sudden he was up to 4th. I like Ethel M chocolates, but I am still not sure how I felt about his pale green car design. With 98 laps to go, Harvick had made it up to 8th. Elliott got loose and spun. The general discussion was that he got side air off other cars, Harvick being one of those. They showed the replay of his spin many times and it appeared Kurt Busch was caught up in the incident somehow and got a wee bit of damage. Never found out what other car connected with Kurt to cause the damage.

On the restart after the caution, it was Hamlin in the lead followed by Larson, Truex and Kyle Busch. With 90 to go, Blaney was up to 3rd and Harvick was in 11th. Harvick started to fall back again. There had been, and continued to be lots of blocking during the race. It did seem like that the closer we got to the end that much more blocking was going on. With 78 laps to go, Brad was going for 2nd and managed to get there. Hamlin was in the lead with 75 laps to go, but when it was 61 laps to go, Larson was back in the lead. Kyle Busch was in 6th, Harvick 19th and Blaney was in 4th.

With 50 laps to go, green flag pit stops started. During these green flag pit stops, Suarez chose not to pit so he was able to lead some laps before he finally had to pit with about 30 laps to go, and Larson took the lead again when Suarez pitted. At this time, I began to hope and believe that Larson could win this race. The cars were beginning to get a bit strung out again, so that encouraged me to keep those thoughts about Larson. He put Harvick a lap down with 17 laps to go.

Then, with 16 laps to go, Alex Bowman blew a tire, and almost took out Alfredo when he cut down to get on to pit road. He was still traveling at a high rate of speed, but not as fast as Alfredo was going when he cut down. The video of Alfredo going by was just amazing – and scary. But, no accident, and that was a good thing. With 7 laps to go, I was on pins and needles as Larson was getting into traffic and I was afraid someone would hold him back, or possibly cause a caution.

The laps wound down, and Larson got his win. It was very special when he did a burnout smoke show on the back stretch to honor family in motor home parked back in that area. Then he came back to the front stretch and did his burnout at the start/finish line. Following his win were Kez in 2nd, Kyle Busch 3rd, Hamlin 4th, Blaney 5th and Harvick finished 20th. During his interview at the start/finish line, they talked about how the #5 had been driven last by Ricky Hendrick and the paint scheme was honoring him. Ricky, Rick’s son, had been killed in a plane crash in 2004, along with others, when their plane crashed on the way to a race in Martinsville, VA.

Note: Comments will be appreciated. Thank you.