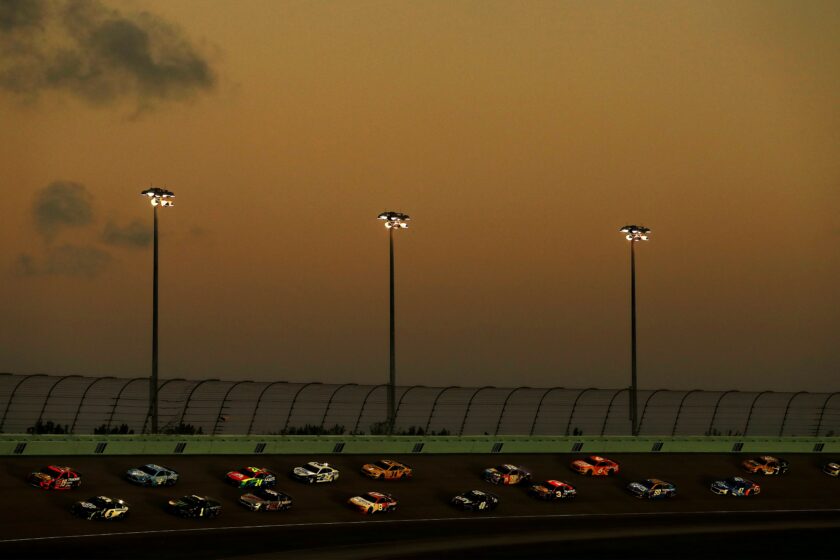 With the series bearing down on Las Vegas this weekend it’s time to take one final look back at Homestead, last Sunday. This time through the numbers.

4.83 million viewers plus several thousand fortunate fans who viewed the race live saw William Byron collect his first win of the season and second of his career. Byron held off a hard charging Tyler Reddick for a 2.777 second win. Byron started 31st and roared to fifth by Stage 1, won Stage 2 and led the final 58 laps to take the win. The #24 car went to the front four times, leading a total of 102 of the 267 laps. This nearly doubled Chris Buescher’s 57 laps led.

Byron took the lead at lap 160 and led all but 9 of the final 107 laps, including winning Stage 2 and ultimately the race. He dominated the end of the race with two runs of 33 laps and the final 58 laps.

With the win, Byron joins Michael McDowell and Christopher Bell in the 2021 Playoffs (for now).

Cautions slowed the 267 lap race six times – three for the mandatory Competition Caution and two Stage Break conclusions, while the other three were for fluid on the track (2 times) and a two car incident in the final stage of the race.

Those yellow flags flew for 36 laps (13.48%) of the race. While the race was slowed we saw 8 of the 22 lead changes occur. Kyle Larson won the race off pit road, Martin Truex, Jr. beat Larson to the line for the restart and the remaining six were positional passes. These were lead changes that occurred just because the leader pitted before the start/finish line while other competitors pitted on the other side of the line. So of the 8 caution flag lead changes, only two were a result of competition.

So Homestead had more green flag passes for positions than the other races but had less action up front than the 500.

Looking deeper into the action we find that NASCAR scoring data also determines how many of those green flag passes occurred for P1 or for the race lead. The loop data shows that of the 3411 green flag passes that loop data recorded at Homestead, 34 were for the lead or for P1 and only 12 of those resulted in green flag lead change

Whoa! How can you have 34 green flag passes for the lead and only 12 green flag lead changes?

So at Homestead, 34 of 3411 green flag passes occurred at the very front for the lead (1.0%) and only 12 of those resulted in an actual lead change. In 231 green flag laps, the fans saw a total of 12 green flag lead changes.

A closer look at those 12 green flag lead changes show that one was for Hamlin being penalized and had to go to the rear of the field, three occurred during the six restarts and another three occurred during green flag pit stops (pit sequence or “strategy” passes). The final five passes for the lead were actual passes on track or racing passes. Racing passes – the ultimate pass.

Five racing passes for the lead. One was for a Stage 1 win. Another for the race win.

So in 3 hours and 12 minutes of watching the Dixie Vodka 400, fans saw five passes for the lead.

After the race 15,052 fans voted in the Jeff Gluck “Was This a Good Race?” Poll. Though “unofficial” 78.1% said that a five racing pass for the lead Homestead was a good race. This outpaced the 500 that pulled a 57% and was just a smidge behind season leading Daytona Road Course 80.1%.

That’s Homestead… by the NASCAR numbers and some deeper numbers.

It all depends on who you ask.

Pretty sure William Byron, his team, sponsors and fans would say it was.

What do you think?