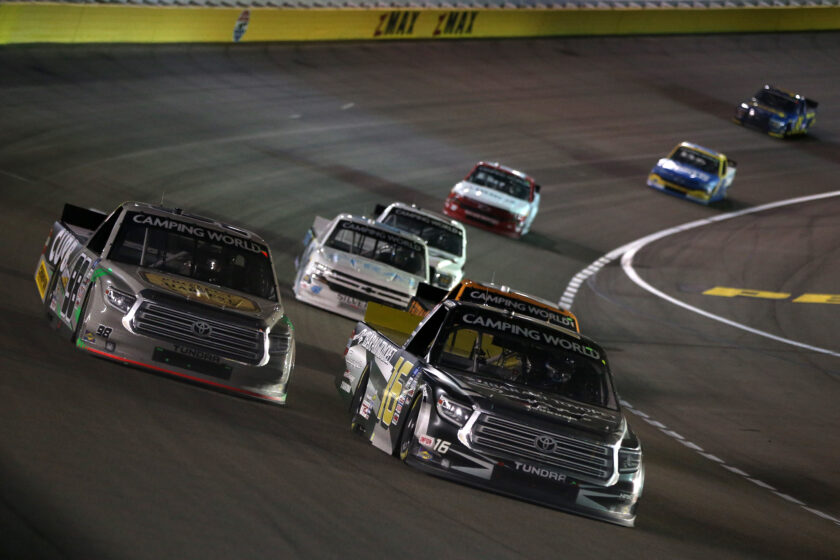 With the Las Vegas weekend in the books we can look back on a weekend of really good racing in all three NASCAR series starting of on Friday nights Truck race. Or in my case I sat down to watch it Saturday morning after breakfast. I normally like to watch the races live however, a 9 pm eastern start time makes it 3 am here and that’s a bit to late even for me. Going into the weekend there was a lot of talk about Marcus Lemonis of Camping World giving15K to teams for running a truck fully wrapped in Camping World colors. He’ll improve that to 25K for a Top 10, 35K for a Top 5, and 50K for the win. This extra bonus money is so great and 10 teams took advantage of the extra founding for the teams. I think it may make the Truck racers even better, and from what I’ve seen on Twitter that Marcus Lemonis got a new challenge going for the Truck teams!

Well in the race Sheldon Creed took the lead from pole only to see John Hunter Nemecheck take over the lead after a few laps and by the end of the day Nemecheck had lead 94 of the 134 laps. Don’t get me wrong here this was a good race with a lot of passing and sometimes 3-4 wide racing not just on restarts but also into the runs. The only thing negative to say about the race is, to many cautions, 9 for 48 laps, and with almost 36 % of the race under yellow flag condition is a bit to much.

This time the Toyotas was very strong and took the first 6 positions and an impressive win for John Hunter Nemecheck beating his boss-man Kyle Busch. Austin Hill, who has not have the best weeks at Daytona, took third in his one hundredh start. Good to see Stewart Friesen leading a few laps and finish fourth, with Matt Crafton rounding up top five. Shout out to Grant Enfinger P7, driving the #9 for Codie Rohrbaugh. It was also good to see that Conor Daly was OK after that scary crash, hope Al Niece brings him back in one of his trucks again! And first start in the Truck series for last years ARCA campion Bret Holmes driving for his family owned team. Holmes was doing Ok up until he got caught up in the lap 97 incident among Hallie Deegan, Ryan Truex, David Gilliland, and others.

In Saturdays Xfinity race was about as good as last weeks NXS race. Lot of lead changes and lots of green flag passes two weeks in a row. That is not what we been blessed with for the last couple of years on the 1.5-milers in the Xfinity series. In this race last week’s winner Myatt Snider hade pole with Austin Cindric on his outside and Daniel Hemric behind him. Hemric put Snider three wide in the middle and took over the lead on the first lap only to see Austin Cindric passing him on the next lap. Hemric tog over the lead on the next restart, after Stefan Parsons spin and the completion caution break, but The #22 of Cindric was soon back in the lead, and eventually won the first stage.

Daniel Hemric hade the lead at the start of stage 2 and again great racing and lots of passing and not just on the first three laps also later into a run. Justin Allgaier tog over the lead after Hemric had led 14 laps from the start of Stage 2. Allgaier and Hemric than took turns leading while early leader Austin Cindric had tire going down but got saved by a caution from going laps down, and would eventually come back to finish fourth in the race.

Daniel Hemric won stage two with AJ Allmendinger in second and Justin Allgaier third. After the pit-stops Brandon Jones in the lead after using pit strategy and staying out on a bit older tires. Jones manage to hold on to the lead on the restart for about 20 laps, when Daniel Hemric got the best of him and took over the lead. During this long green flag run to start of the final stage the lead shifted between several of the drivers already mentioned and also including Justin Haley and Ty Dillon.

At the end of the day it was AJ Allmendinger who had the fastest car and held of Daniel Hemric for the win and Brandon Jones in third. Good to see Josh Berry driving for JR motorsports in seventh place. Also good to see Jeb Burton, who didn’t have the best of days, bring home a top ten. Burton now have finished inside top ten in all four races and is soon to get a win! Shout out of the week to Brandon Brown, P.11 and Santino Ferrucci this time P.13 and on the lead lap.

I’m not going to say to much about the Cup race other than this was a very good race with a lot of good racing 27 lead changes and over 17 green flag passes per lap. Vivian has a written a bit more extensive coverage found here; https://www.purethunderracing.com/2021/03/pennzoil-400-at-las-vegas.htm At the end it was Kyle Larson who won the race after a long green flag run where the best car on the day won. This feel a bit refreshing after a few week with kind of “drama cautions” at the end of the races to make into NASCAR overtime! A small note here and a shout out to Erik Jones, who finish tenth after having trubbel early and scraping the wall. There has only been seven speeding on pit-road penalties in the first 4 races, and last year winner Quin Houff hasn’t got one so far

A few words on the TV converge, Fox coverage was again good this time Adam Alexander had Kurt Busch along with Joey Logano in the Fox booth for the Xfinity race and Austin Dillon in the booth for the Truck Race made a good jobb!