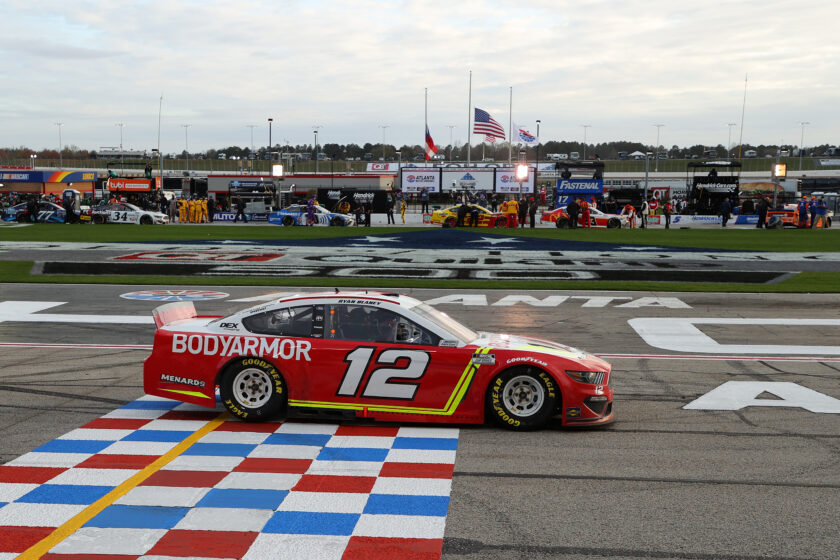 This is a continuance of the Race Reviews I wrote earlier for the Truck and Xfinity races. In those, I did not include the Pre-race review, but am including it for the Cup race. I have tried to be fair and unbiased while doing these reviews. If you remember, I graded the truck broadcast B+ and the Xfinity got a B. I think the broadcast crew we have now are a much better group than we had a few years ago. Let’s see how the Cup race fairs. Will it be better, the same or not as good?

They gave us lots of good information in the pre race show. I am not sure how I feel about the Put it Out segment. Perhaps it is the name or the way they scream it at end of each video they present it and it seems to turn me off. Larry Mc made a point about the grass situation and said they should get rid of it and possibly use turf and it would not tear up as many cars. Good point. They had a great interview with Chase Elliot. I think the segment where they announced and showed us the Covid sniffing dog was excellent. They also gave us the odds for some of the drivers in the race. Overall, good pre race show.

Being an American, I always look forward to the Invocation, as well as the National Anthem. I felt good about the Invocation was good, but had to frown and try to understand why they allow performers to desecrate our Anthem. I don’t know anything about the Swedish National Anthem, but wonder if this ever happens with it, or if it is even performed at special sporting or other events. Perhaps someone could advise me on that. Thank you.

Mike Joy, Jeff Gordon and Clint Bowyer were in the booth while Jamie Little and Regan Smith were on pit road and Larry McReynolds handled technical duties. I can already say Great Crew! Jeff and Clint get along great and are always focused on the race or something about racing.

In Stage 1, we got an update about the grip on the track and it was pointed out that where the bottom of track paint lines were, then there would be extra grip there and that was a good thing. The first ten rows of the starting grid was announced, and then we were left to read the rest of the field. I have always disliked that they do not announce all drivers because they all have fans who would like to hear their favorite driver’s name.

One thing I noticed about the crew in the booth was that they never had inside jokes like the previous crew had. They told us who had the in-car cameras and how they thought they were great. Personally, I do not care for them as I like to see the action as a whole on the track, not just a wee bit from a windshield or other window. Overall, in the first stage, they gave us good updates and information. I did see they seemed to favor the Toyota drivers over the other ones. But then, Toyota pays them to do that, maybe. BTW Kyle Larson in a Chevrolet won the stage.

In Stage 2, they advised us right away that Kevin Harvick had a flat tire and had to pit again which would put him way back in the field, thus changing some of the odds in the finishing order. They explained how the choose zone worked and why some drivers chose the line they did to restart the race. They also mentioned that Kyle Larson kept trying to put him a lap down to eliminate competition for the win. Good points. Green flag pit stops were done and we had good updates on what was going on there. Larry Mc gave us information on some of the pit stop times, including time in and time out, plus time in actual pit, which then gave the overall time. This is always interesting to me.

The pit road crew also gave us great information on some drivers and their stops. During this time, they took time to tell us how great it was to have fans back in the stands again. They commented on how lots of those fans were families. Then Harvick went a lap down and they speculated on how that would affect the finishing order at the end of the race. As they were racing, we saw several drivers doing real good and moving up through the field.

One that I noticed was Ryan Blaney and how well he was doing but at that time they did not mention him. They proudly announced they would be going side by side during commercials. This is a good thing, but I have to mute the TV or I find myself watching the commercial instead of continuing to watch the race. Stage 2 had good points, but also a few things were missed by them. Kyle Larson won this stage which made it his 2nd stage win of the day.

Stage 3 started and all was going well with the announcing. Then on lap 220 Chase Elliot‘s car began to smoke and it turned out to be a blown engine. They lamented on why and how Georgia’s own would not win today. What I found interesting here was Larry Mc telling us that something made the RPM’s spike to over 9500, thus resulting in the engine blowing. I had not heard of this before so that was great info. After he was out of the car, Jamie Little did an interview with him in which he confirmed it was the engine that put him out of the race. Everyone pitted and we were told that Blaney was first out of the pits with the 2nd fastest time ever for a pit stop. However, it was not long before Larson passed him and took a dominating lead of the race again.

All reports were going good and keeping us informed on what was happening in the race. Green flag pit stops started with 53 laps to go and we were given the running order. Jamie gave us info on the tire wear by telling us it was good. Harvick had gotten his lap back and was now running 12th. This was great news. This part of the race became very boring, but booth tried to keep up the drama and were still cheerful, basically giving the race to Larson. Larry Mc reminded us that most races at Atlanta had lead changes in the last 10 laps but the booth crew scoffed that off and did not expect it to happen in this race. With 30 laps to go, Larson had a 2.53 seconds lead and they seemed surprised that Blaney was gaining of him and reasoned it was because Larson was taking it easy.

With 15 laps to go, the lead had dwindled to 0.83 seconds. They wondered if Logano would hold Larson up, but that did not happen. Joey let both cars by. Then they talked about where they were running and if the seams on track were affecting the drivers. Mike Joy told us that all 4 of Blaney’s wins had come with a pass during the last 10 laps of the race. Mike told us Kyle had led 267 of 315 laps of the race. Lead change came with 8 to go and they mentioned that possibly Kyle’s tires were just worn out. The booth was pretty much speechless when Blaney won, as they did not expect this to happen. They did express they just couldn’t believe it. As he usually does after a win, Blaney gave his checkered flag to a young fan in the stands. Ryan’s dad, Dave, was in stands and they briefly showed him which was great. For an interesting and informative article, please check this out. ( Click here )

Overall, I give this broadcast a B+

Agree, disagree, let me know by commenting. Thank you.