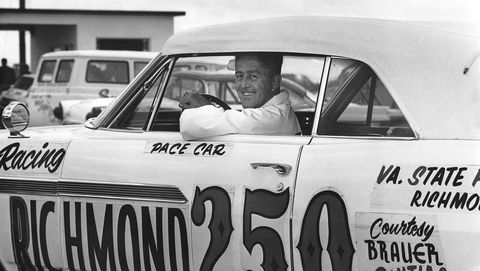 Greetings. My name is Frank Buhrman, and I’m happy to be here, thankful to friend Bernth Nordin for allowing me to join this group, and hopeful that it wasn’t a foolhardy move on his part.

I’m a native of Richmond, Virginia, USA, now living in Carroll Valley, a nice, smaller community near Gettysburg, Pennsylvania. With those two geographic touchstones, yes, I am something of a U.S. Civil War buff. But since Sunday, April 7, 1963, I also have been a fan of auto racing.

It was on that date that I attended the Richmond 250 NASCAR Grand National (Cup) race on the old half-mile dirt oval at the Virginia State Fairgrounds. Richmond Raceway, which also owns the former fairgrounds property, sits on that site today.

Back in ’63, legends Joe Weatherly and Junior Johnson had a race-long battle for the lead, ending when Johnson’s engine gave up six laps from the finish, and their display hooked me. I was soon attending weekly races at Richmond’s Southside Speedway (sadly, closed as of this year) and traveling to other tracks when possible – my current count is just over 100 different speedways.

In 1985, my family (wife and two now-grown children) moved to Pennsylvania, and slowly my focus moved from stock cars on pavement to open wheel cars (sprint cars in particular) on dirt. Today I’m a volunteer writer with the Pennsylvania Sprint Series, which runs limited engine RaceSaver sprint cars on various Central Pennsylvania tracks. I also volunteer at the Eastern Museum of Motor Racing, a wonderful museum just south of Harrisburg, Pa., and 30 miles north for me.

My contributions here likely will focus mostly on history, although – as with my first effort – I may try to apply the past to current situations. Prejudices you will learn to expect: I hate the charter system of car ownership in NASCAR; hate driver development programs that promote young racers before they have a fan base; hate stage racing, and hate NASCAR’s rules and points system, both of which make the U.S. tax code look simple. I like hometown hero drivers and wish they had a way to challenge the “big guys” the way they did decades ago.

I’ll tell some stories, personal or historical, which might be local in origin but I hope will be of interest anywhere. Please let me know what you think as we go along, and thanks for reading.