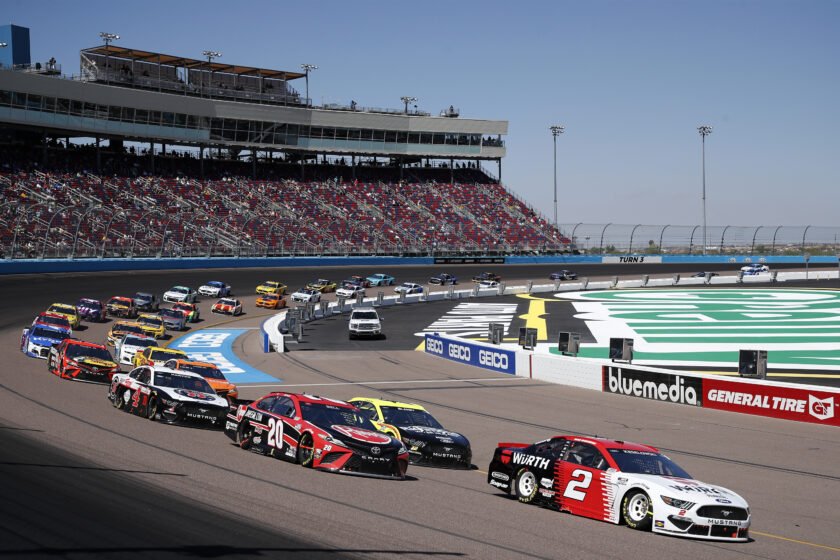 Would the 2021 version of the Phoenix race that saw Martin Truex, Jr. hold of Joey Logano for the win put up better numbers than Chase Elliott’s 2020 Championship win?  Let’s see what the numbers say. The Instacart 500 at Phoenix was the fifth race of the 2021 season. The 38 drivers took the green flag with the same cars, tires and horsepower/aero package they used here back in November 2020 for the Cup Championship. The race had many similarities as that Championship Race but it also had some significant differences.

· Penske drivers won Stages One and Two, only to lose the race to another team. Chase Elliott with Hendrick took the 2020 Finale while Martin Truex, Jr. took Joe Gibbs Racing to Victory Lane on Sunday

· Both races saw nine different drivers on the point

Let’s look at some of the differences which included –

Where was the action?

Both races saw right at 31% of the green flag passes for position take place up in the P1-P15 positions.  Or another way to say it is nearly 70% of the passes took place in P16-P38. These numbers though are consistent between the two races

How about the action at the very front?

Strategy Passes – Was there was some difference there?

Different race strategies create different pit strategies.  Green Flag Lead Changes occur when “strategy” dictates the leader pit from the lead and relinquish the lead to a trailing competitor, as opposed to a competitor racing past the leader to take the point. The 2020 Championship race had six such lead changes where the leader pitted from the lead under green while the 2021 version only had five. The difference may be attributed to the longer green flag runs last year.

Those restarts were crazy today! What do the numbers show there?

Those restarts were crazy weren’t they?  Often five wide back in the field.  And how about that dive bomb move that Brad Keselowski made that nearly clipped the inside wall? Has anyone ever driven it in there any lower?

This race had seven cautions as opposed to four in the 2020 version of the race.  This means that on Sunday we had eight wild start or restarts while 2020 just had five. In the eight times when the field took the green bunched up in double file formation, only on two of those did we see a lead change occur within three laps after the dropping of the green flag. In 2020, we saw it occur once during that race’s five opportunities.

In two races, less than one in three restarts resulted in a lead change.  Note all these start/restart lead changes took place on the first lap of the green flag run. So on the wild restarts there was only one chance to get the lead then and that was on the first lap after the restart.

Long way to say, the restarts looked wild and presented tons of opportunity to passes for position, passing rarely took place at the front.  But in this race, a Restart Pass for the lead was the winning pass as Truex, Jr. passed Logano on the Restart and then held the lead for the final 25 laps.  So that restart was definitely exciting.

Was today’s race finish closer than the Championship Race?

On Sunday, Martin Truex, Jr. beat Joey Logano by 1.698 seconds.  This goes down in the books as the 34th closest finish out the fifty Cup races run at Phoenix since 1988.  Of the nine Stage Races run here since 2017 it ranks as the eighth closest, with last year’s 2.740 second win by Chase Elliott over Brad Keselowski at the bottom of those nine Stage Races.  Chase’s win currently ranks 41st closest out of the 50 Phoenix races.

Passes for the Wins – Restart, Strategy, Racing or something different. What was it Sunday?

In Sunday’s race two Stages were won by Racing Lead Changes or Pass on Tracks, while the pass for the race win was on a Restart.  In November, two of the three Stages, including the race win was done so by Racing Passes.  The win for Stage One win occurred in the pits by a lead exchange that occurs just because of where the drivers pit in relationship to the Start/Finish Line.  These are known as Positional Passes.

That was lead change one.

When Logano finished his pit stop and sped, he retook the lead when he passed Blaney while he was being serviced.   When they came back around with Logano in front and crossed the Start/Finish Logano was awarded the lap lead for lap 34.

Did the drivers “get up on the wheel” going for those valuable Stage Win and Stage Points? How did that compare to the 2020 Championship when it was all on the line?

In the Championship Race, Logano dominated Stage One leading all but one lap, including the final forty Green Flag laps.  In Stage Two, Ryan Blaney passed Elliott with two laps to go to win the Stage. Elliott passed Logano on lap 270 and led the final 43 laps to win the race and the Championship.

As far as “getting up on the wheel” these races are essentially a tossup-one short run and two longer runs.  If had to pick the numbers would tip to 2021 with the two longer runs being shorter than the Championship long runs.

For this season Stage Three has been kind of flat. Did that continue to Race Five? Which Stage had the most action up front?

The 2020 Championship Race had the bulk of the action up front in Stage Two with 9 of the 13 Green Flag Lead Changes occurring then.   The 2021 version saw seven of the 13 green flag lead changes occur in Stage Three.  This “shift” in action is somewhat different than what we saw in the Championship Race as well as the first four races of the 2021 season.

How does this race compare to the previous four races this season?

Are there any other noteworthy numbers from the Instacart 500?

Yes, there were.  The numbers 1, 2, 3, 5, 7, 10.6, 33, 63, 145 stand out.  What do those numbers mean? They describe the day Kyle Larson had on Sunday.  The #5 started 2nd, was penalized three times and forced to go to the rear for a low position of 33rd.  From there, he made 145 green flag passes, 63 in the top 15 to eventually climb to P9 at the end of Stage One, grab the lead by Lap 142 before finishing in 7th place.  Larson’s performance was impressive, maybe more so than Chase Elliott’s drive from the back to the win the Championship.  In the 2020 Finale, Chase only had to do it once and had an advantage of being one of the four championship contenders other competitors gave him a wide berth on his run to the front.

Larson on the other hand had to do it, not once, not twice, but three times and didn’t have the luxury of “contender respect” as he, along with his other teammates sent to the rear with penalties or on track misfortunes like Elliott, Byron and Bowman all clawed their way to the front. Larson showed that like Vegas the week before, he was one of the fastest on the track.  Unfortunately, he was fastest on pit road as well and that may have kept him from being the first repeat winner of the 2021 season.

Overall, the 2020 version of the 500 kilometer race at Phoenix was maybe a slightly more competitive race than the race Sunday.  When you look at the total Lead Changes, 2021 would appear to be better with 22 vs 19, but 2020 had more Green Flag Lead Changes and more Racing Lead Changes.  2021’s numbers are somewhat inflated due to the Positional Passes which hurts it. A couple of things 2021 had that helped close the small gap was Truex, Jr.’s winning pass on one of those wild restarts and a shorter run for the win.  But the gaps is small.

Is there a difference in racing dynamics between a regular season race and the Championship Race?

We’ll just have to wait till November to see!

Thunder On and  Stay Safe!