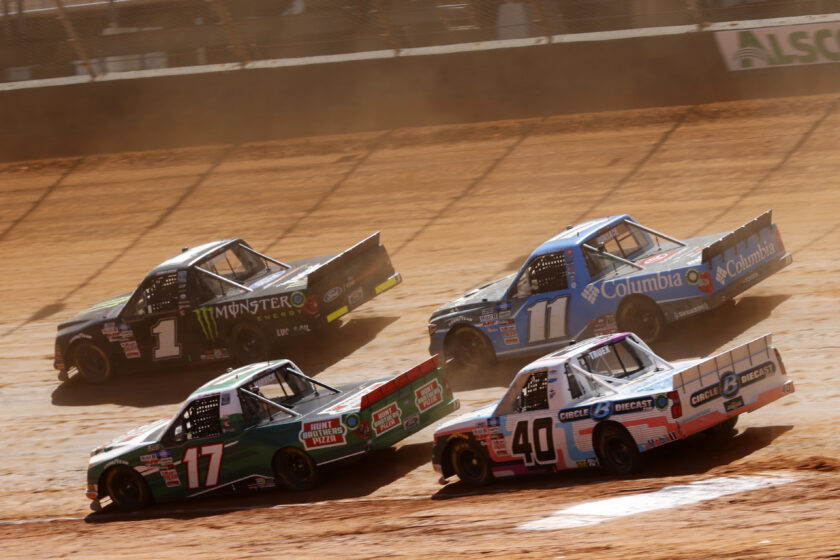 As I sat down to watch the trucks get ready to qualify for their race later in the afternoon, anticipation and excitement came over me. The wait was finally over, and although we lost truck racing at Eldora, we were still going to have a dirt race. To a pure race fan like me, this was something that would take us back to real racing.

Back to Bristol and the dirt. Ooops, did I say dirt? Well, it was supposed to be. But rain had come on Friday night and it was very wet dirt. They had brought in some stock modifieds to pack the track. It really was fun watching that, as they were experienced dirt racers and got around the track rather good. In the booth were Vince Welch, Michael Waltrip and Joey Logano. While waiting for track packing, Michael mentioned that the dirt was going to be a challenge for most of the drivers, and the broadcasters as well. Jamie Little and Regan Smith were in the pits. Regan talked with Tyler Ankrum about why Tyler wore leather boots and Tyler told him they worked best for him. He then talked with Chandler Smith and they both agreed they had no idea what they were doing in the dirt. Vince explained how the track had been created so they could race on dirt. They then showed us the starting lineup for each heat. There was 7 Cup drivers entered in the race. And finally…

Heat One: Vince mentioned we were ready to go racing at Eldora. Oops, wrong info but next time, he got the track right. On the track, they started slinging mud. One lap down and all windshields were totally covered with mud. After one lap, the race was stopped because of the mud. Regan mentioned that the tear offs weighed about 5 pounds. Track packers came back out, but after an hour and a half, the rains came and race was postponed until after the Cup race on Sunday.

Sunday came and after a night of rain which left mud and standing water everywhere, the races were postponed until Monday.

Finally…a nice day and the truck race were ready to get underway. They were ready to start Stage 1. Same people were in the booth and same pit reporters were down on the track. Mike and Joey agreed that they did not know what was going to happen on the track. Joey did say they would have to practice patience. They gave us great information as the race progressed and on lap 18, Joey mentioned that there were definitely 2 distinct lines. Drivers were using swiffer dusters and squeegees to clean inside windshield. Truex won stage one.

Stage 2 got underway and Mike and Joey mentioned how much families and kids in the stands were enjoying the racing. We got to see them laughing and snacking in the stands. Joey talked about how hard it was to manage the tires on a dirt track. Then they told us tempers were starting to flare after an incident on the track involving Nemechek and Crafton. They gave us an update on the track and how it was beginning to get rubbered in. We could see the darker part of the track they were talking about. Truex won stage 2 also. During the break between stages, Jamie and Regan gave us updates on what the different pit crews were doing to the trucks. They also advised us that Grant Enfinger did not pit and wondered if that was a wise decision. We were advised by Jamie that Matt Wolper, lead fabricator of the 34 truck, suffered a major heart attack right after tech inspection on Friday. They are running a decal on the truck thanking all the infield care people for recognizing what was happening and getting him immediate care and to the hospital. Matt is home recuperating at this time. Then the booth talked about Blaney in the booth last week and then went out and won on Sunday and maybe Joey would do the same.

Stage 3 was underway with Truex in the lead. From the way they were talking and laughing, it was obvious that Vince and Mikey were happy about this. There was a crash with 49 laps to go and the booth advised us as to who was out of race now. We were also told that Brett Moffit would be getting married on 4/3/21 and mentioned how the date was in sequence, only backwards. Kyle Larson had been in crash and they told us he had been checked and released. We also got updates on Hailie Deegan and Grant Enfinger. Joey expressed concern about Truex in the Cup race since he had been so dominate in the truck race. With 25 laps to go there was no competition for Truex. Vince gave a shout out to Lessard for doing good and staying up toward the front. With 19 laps to go, they did a crank it up, but had to stop due to caution and then red flag with 17 to go. Overall, the recaps were good and the track change report was good also. The race restarted with 12 laps to go and Truex continued to dominate and win the race.

Overall, the recap of the race was well done by booth and pit reporters. I think I could safely give them a B+