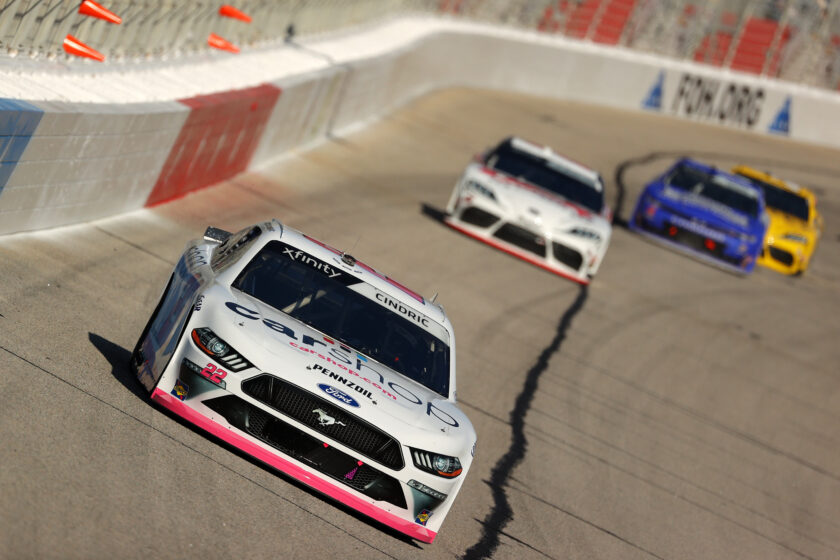 Instead of focusing on the Atlanta racing, I decided to focus on how well the broadcasters gave info that the average fan would like and understand. All races were on FOX Channels. For trucks and Xfinity, I chose not to talk about the pre race, but I did mention it on the Cup race. One of the main things I was looking for was to see if there was any bias in the reporting and descriptions of incidents.

Please realize my opinions may not be yours. I also was checking to see if the booth was seeing everything we as fans were seeing as we watched the race on tv. In addition, I wanted to see any of them jumped to conclusions when or if there were incidents on the track. Initially, I started out trying to mention every interesting thing they talked about, but soon discovered if I did that, then the article would be extremely long so I decided to condense each series into basics of good and bad.

Throughout all the races, there was promotion for the upcoming races on dirt at Bristol. This was exciting and gave us something to look forward to. It should be great racing.

Back to Atlanta…starting with the Fr8Autions200 truck race. Ryan Blaney was in the booth along with Vince Welch and Michael Waltrip, aka Mikey. On pit road were Jamie Little and Regan Smith.

Opening statements in booth were okay, but it was very obvious that Toyota was the favored make of vehicle in this race. Jamie Little reported that Brett Moffitt had to replace his engine just before race. This put him to the back of the line-up. Blaney gave us some great information on the grip of the track. Waltrip gave us info on how it looks from the in car camera feels like just like it feels on the track. I cannot agree with this. Vince mentioned that Moffitt had gained 20 spots.

The competition caution came out and it was Blaney’s opinion that the front runners may not pit. That was good info to have. We were reminded this was John Hunter’s third straight stage win when they gave us updated at the end of stage one. Good point. We also got updates from the pits by Jamie and Regan. During stage 2 they talked about Bill Lester coming back for the first time since 2007. This was info some of us may not have remembered or known. Blaney then reminded us of Hailie Deegan was now racing trucks. Jamie explained a little about Kyle Busch’s new crew chief. This brings us a concern a lot of fans have. When Kyle is in a lesser series race, a lot of us have a hard time keeping our interest on the race as he normally takes over on the track and the broadcast crew usually talks more about him than they do about the regular series drivers.

At the end of stage two, Vince and crew mentioned that it was possible Kyle had let off a bit in order to let the driver of his truck, John Hunter, win both stage one and two. It did look suspect. Beginning of stage three, the booth reminded us about the choose line. Also told us about 3 pit road penalties and who they were against and why. They updated us on the drivers moving up through the field. Blaney mentioned that if tires get on seams on track, it is not good. Then he mentioned if they get on paint, it is good. Green flag pit stops went off without penalties for anyone. Kyle Busch took a commanding lead and went on to win the race as many of us expected would happen. Very short post race show. I would rate the broadcast and pit road crew with a B+.

The Xfinity race was immediately after the truck race. Adam Alexander, Ryan Blaney and Tyler Reddick were in the booth. Jamie Little and Regan Smith continued with pit road duties. Adam told us that Martin Truex, Jr would be running #54, a Joe Gibbs car. This immediately gave me a sigh because as usual, a Cup driver running in a lesser series means it will possibly be a boring race due to the dominance of that car and driver. I tried very hard to be fair and pay attention to the race.

However, there is very little to report as the broadcast crew and pit lane crew gave us much the same information as we had been given in the truck race. Reddick was an interesting addition to the booth and he took his lead from Blaney. Adam had never been much of an additive to the broadcast crew, imo. They updated us as needed and gave us info to explain when incidents did happen to help us understand why they happened. All in all, I think this was a B rated broadcast.

These are my thoughts on the truck and Xfinity race broadcasts. I thank you for reading. There will be a #2 article on the Cup race coming soon. Please feel free to express your thoughts in the comments section.

Note: Comments will be appreciated. Thank you.