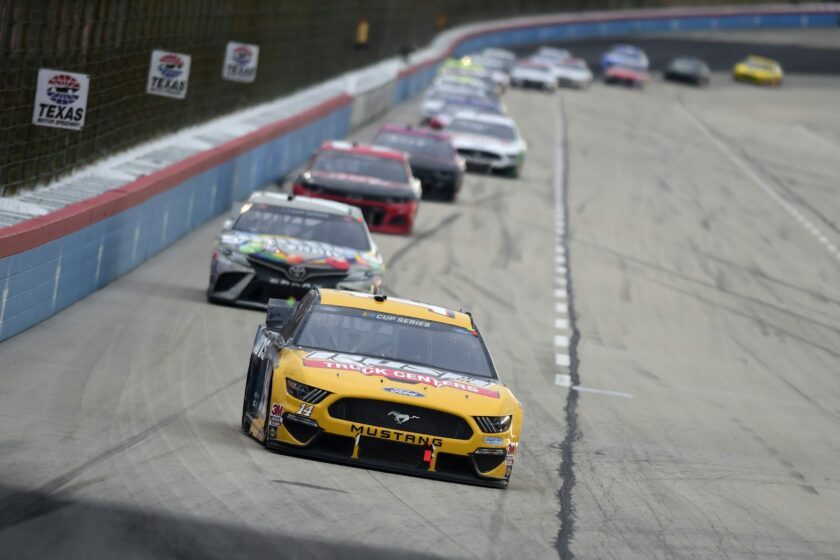 What a weekend that was! Lots of crazy things going on all over the weekend. 2020 has been like no other thing we’ve seen so far, and it has been hard on everyone from sponsors to teams and driver and with the clock almost running out on driver to make it to the much hyped “championship four” some of them started to lose their cool. I’m not going to get too much into who did what in the different incidents of this weekend. I just want to say one thing to Justin Allgaier, Ben Rhodes, and everyone else involved in incidents during the weekend! When pointing your finger to another person there are always three fingers pointing back at yourself!! And maybe taking to social media when your mad isn’t the smartest thing to do!

With that said let’s turn our eyes to what was positive this weekend and on top of my list must be Harrison Burton’s last corner pass for the win! It must be a very long time since we had a last lap pass for the win, and to see a faster car actually run down and pass another car is always a good thing. From what you could tell from the TV coverage it was some decent racing upfront and with Chase Briscoe having a mechanical issue early, some his competitors took advantage and by the end of the day, after Justin Allgaier made a desperate move on the lap 175 restart and took himself and Brandon Jones out of contention as well as ruined the day for Ross Chastain and Jeremy Clements, we got to see a number of drivers up in the top ten from smaller teams! Brandon Brown fifth and Ryan Vargas driving for Johnny Davis in P 8, another top ten for Josh Williams P 9 this time, also a shout out to Tommy Joe Martins first top ten in his career, P10 driving for his family team. So, when the dust had settled, Harrison Burton won with the last lap pass on Noah Gragson and Anthony Alfredo in third!

Trucks usually put on some great racing but this time at Texas maybe not the best I’ve seen this year! Racing late in the NXS race showed some promising signs but after the Xfinity race NASCAR decided to apply more of the PJ 1 traction compound in one of the corners and that made drivers for some reason not too willing to run the upper groove and it took some time for it to come in but when it did the race sort of came alive. Sheldon Creed had the Truck to beat on this day and when we got the race in the books, he had led 131 of the 152-lap run. Now here’s some logic for you. The name of this race was Speedy Cash 400 so where does the 400 come in if they run 147 laps that would make 220.5-miles which makes 354,8 km. If they had run 166 laps it would have make up to the 400 km mark. Well in the race, other drivers than Sheldon Creed would sometimes take over the lead but only for a lap or so before Creed took the lead back. Stewart Friesen seemed to have a strong truck and managed to lead a couple of laps before contact with Jonny Sauter after Sauter over-drove his truck in turn two late in the race and ended his day. Later on, Ben Rhodes lost his cool and made a stupid move, wrecking Christian Eckes and taking himself out of contention for a win. Also, in the last lap of the race got involved in another incident which took away a top fifteen finish for Josh Bilicki driving the #00 for Reaume Brothers and that was totally uncalled for! Shout out to Austin Wayne Self, P 7 and Dylan Lupton, P 8, making his second truck start of the year driving for DGR – Crosley.

2020 has been an upside-down year for Indy Car. Streets of St Petersburg are normally the first race of the year on the Indy Car schedule has now this year become the last race of the year where the Champion is crowned. Scott Dixon only had to finish the race inside top nine to win the title while Josef Newgarden in second had to win the race and also score maximum point but his teammate Will Power won the pool and Newgarden qualified in P 8  with Scott Dixon a few spots behind Newgarden hade his work cut out for him. Alexander Rossi took over the lead early in the race and looked very strong and seemed be the one to beat up until Rossi over cooked it a bit in the tight turn four, hit the marbles and hit the wall, ending a not too good season for him. Felix Rosenqvist had his two best qualifying laps disallowed due to blocking and had to start from P 22. With trouble early forcing him to pit for a flat rear tire Rosenqvist was one lap down but able to keep pace with the leading Alexander Rossi and also get back to the lead lap. Once on the lead-lap, Felix Rosenqvist stormed through the field all the way up to near top five when a technical issue set him two laps down. Marcus Ericsson started p15, which is a bit too far from the front but managed to drive up to P 7 by the end of the day. By the end of the day Josef Newgarden won the race with Patricio O’Ward second and Scott Dixon coming in third and with that taking home the Championship for the sixth time. Chip Ganassi is going to have an impressive line up next year with 6-time Indy Car Champion Scott Dixon along with seven-time NASCAR Champion Jimmie Johnson and former F-1 driver Marcus Ericsson also in one of the Ganassi cars, while Felix Rosenqvist is rumored to take over the #7 from Oliver Askew in the Arrow McLaren.

What to say about the Cup race? I don’t know but the Sunday condition didn’t look good and as much as one would like to see some racing, I’m doubtful that they even should started the race on Sunday. And sure enough, the tricky condition soon came into play with some slick spots on the track and after a couple of incidents with cars getting loose, JJ Yeley took a very hard hit when he crashed in turn two. Well we got some more green flag laps in before the mist and rain become too much, and NASCAR put out the Red Flag.

Mother Nature held on to the lead on Monday and Tuesday, but on Wednesday NASCAR and the Track had gathered up enough Jet Dryers and Air Titans to get the moisture away and we finally got to see some live racing again. Clint Bowyer took the lead on the restart and just like last week’s race, the leader proved to be very hard to pass. A gamble on tires put Alex Bowman in front at the start of stage two and again no one could pass the leader until pitstops after Joey Gase spun on lap 134 in turn two. All of this led up to gambling on pit-road in order to get the lead. Chase Elliott was one of them when his crew chief Alan Gustafson called for gas only on the green flag pitstop before the end of stage two. However, the right rear tire gave up on him on the out lap from the pits and he had to come back to pit-road for tires, putting him one lap down. In the meantime Kyle Busch had taken the lead from Martin Truex Jr after Truex run the car out of gas This time Kyle Busch and his crew chief Adam Stevens had everything under control and with no mistakes from the pit-crew there was no stopping him as the race went green all the way through the last stage. Martin Truex Jr came in second and Christopher Bell was a strong third!

This has been a trying week with almost endless rain delays for the Cup teams as well as for us fans. I’d like you to pause for a moment and think about the crews and the Hauler-drivers, away from families. Guys like Captain Ron, the driver of the #32 team’s Hauler and all his colleagues, that once we get the race in have to rush back from Fort Worth Texas up to the Charlotte area for a quick reload and head out to Martinsville to keep the show rolling for us! Drive careful out there and we’ll be thinking about you!