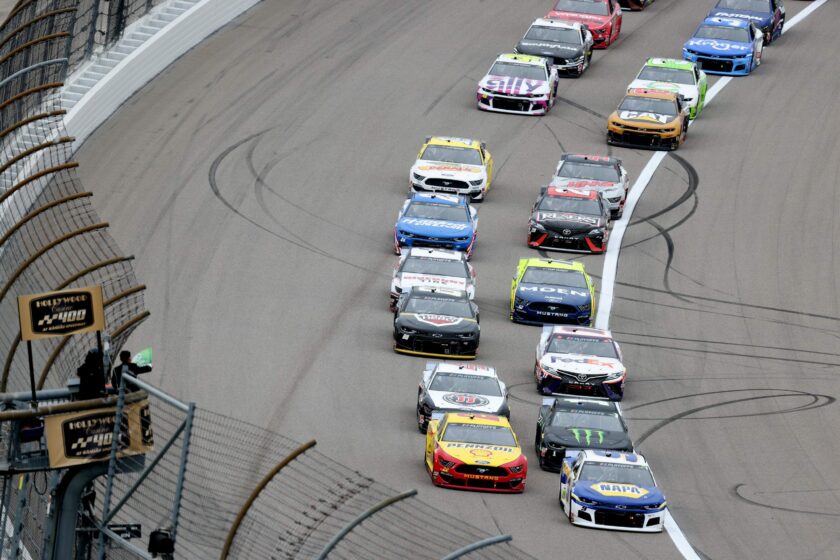 All three NASCAR series were in Kansas to put on a show for us this weekend and first out were the Trucks. I love the Truck racing right now; almost every time it provides great racing, and this time was no exception. A good mix of young drivers trying to make it up the NASCAR ladder and veteran drivers guiding them! This week we got to see Timothy Peters back in a truck and next week at Texas James Buescher return to the truck series. We also saw Hailie Deegan making her debut in the Truck series driving for DGR – Crosley.

At the Kansas truck race, Sheldon Creed took the lead on the first lap and led for most of the laps in the race doing battle with Austin Hill and Zane Smith for the most part of the first half of the race. Austin Hill had some contact with Christian Eckes when going too tight around the #10 truck of Jennifer Jo Cobbs truck, who was already down on the apron, coming to the Green and White checkered flag at the end of stage two. The #16 team had to make an extra pit-stop to make repairs and clearing the fenders on the truck from rubbing the tires, forcing him to start at the back. Creed tock the lead on the restart and held onto the lead until about  half way into the fuel – run when the handle went away on his truck and he fell back a few spots.  Zane Smith was able to take over the lead with Brett Moffitt coming up from behind. The GMS trucks have been very strong this year and when one falls a little bit, there is almost always another GMS truck there to take over. This time It was Brett Moffitt who took the win after a hard fight with Zane Smith where Smith made slight contact with rear corner of Moffitt’s truck and spun, bringing out the caution for a NASCAR overtime, where Brett Moffitt held off Sheldon Creed and a hard charging Austin Hill, who stormed up past the field after taking on two tires at the pit stop just before the restart. Grant Enfinger in fourth and KBM teammates Chandler Smith and Christian Eckes P5 and & P6. Shout out to Timothy Peters, a solid P7 subbing for Stewart Friesen in the #52. Also, congrats to Hailie Deegan, well done, P 16 in her debut and ran all but one lap of the race.

Later on, the Xfinity cars took to the track for the 300-miler. I’m not too fond of the concept of running two races on the same day, but it is 2020 and everything is upside down so I guess I’m a bit lucky to be able to shut down the Stream and be able to return to it the next day! One other advantage we have here in Sweden is we are plus six hours from your eastern time zone, so what for you is a 2:00 pm start time for the race is a perfect 8 pm for us! Small note here,,,  7:00 pm Eastern is not too good for us in Europe.

So, in the race Noah Gragson took the lead after starting up front. An early caution for a spin by the #5 of Matt Mills led up to some three and four wide racing on the restart and on lap 15 Noah Gragson was going for it at the same time Austin Cindric also did and took them both out of contention. Not the first time we’ve seen Gragson gunning for the win only a few laps into the race, but this time he had company. Chase Briscoe was able to save his car from the wrecks in front of him without getting hit from behind, and with two of the faster cars gone, no one had anything for him and Briscoe led a total of 159 laps of the 200.

Anthony Alfredo wasn’t as lucky as Briscoe when he landed on his roof after taking a hard hit with the outside wall after Justin Allgaier had taken him three-wide on the apron at the restart on lap 173!  Daniel Hemric, who had scraped the wall early in the race was able to recover for a second place. Ryan Sieg came home with third after leading 19 laps, the second most in the race, with Justin Haley in fourth. Austin Hill and Brett Moffit who had run the Truck race a couple of hours before came in P5 and  P7. Also a shout out to Josh Williams who came in sixth without even being noticed by the NBCSN booth.

What to say about the Cup race? Well not too much to say when the NBCSN both is focused on the front runners and the “Play Offers” we can only react to what we are allowed to see. Chase Elliott took the lead at the start of the race. There was a small mix up of the field after the pitstops at the competition caution after William Byron had taken on two tires and Kurt Busch having his first pit road speeding penalty of the year. Kevin Harvick took over the lead on the restart and held onto it until Chase Elliott took over with 17 laps to go in stage 1, as we here get the NASCAR International feed and NO commercials we actually got to see the pass live while you guys over there were on break.

Chase Elliott held on to the lead until Denny Hamlin passed him out of the pits. We got to see some good racing with the leading Hamlin and Chase Elliott at first and later on Ryan Blaney, but Denny Hamlin held onto the lead until the cycle of green flag pit stops began. A caution mixed the field a little bit again, but Denny Hamlin held onto the lead and took home stage two. Kyle Busch stayed out and took over the lead for a few laps before Joey Logano passed him after taking two tires on the pitstop at stage two break, only to see himself passed by Kevin Harvick after about two laps. Harvick held on to the lead up to the pit stops after Kurt Busch had blown his engine and Corey LaJoie stayed out and lead a lap, but at the restart Kevin Harvick was back in front of the field. Tyler Reddick made contact with the outside wall with 47 laps left to go and everybody on the lead lap followed Harvick down the pit road for tires and fuel. Joey Logano’s #22 was the first car out of the pits, followed by Kevin Harvick and Alex Bowman. That order held on to the end of the race as Kevin Harvick never was able to pass Logano back for the lead again and Alex Bowman managed to take back his third place. Tight racing at the end but  it is almost impossible to pass the leader unless the handle of the car in the lead completely goes away or the leader gets trapped by a slower car. It was Joey Logano who took home the win. Shout out to Christopher Bell, P10 this tine without getting much attention from the booth.

Next weekend we’ve got another triple header, this time at Texas Motor Speedway and the last Indy car race from St Peterburg Florida also on Sunday. As the two races are being aired on the NBC network it feels a bit unnecessary with the overlap as the races are aired only one hour apart, with IndyCar on NBC and the Cup race on NBCSN. But it is 2020 so things are what they are and not what they should be!