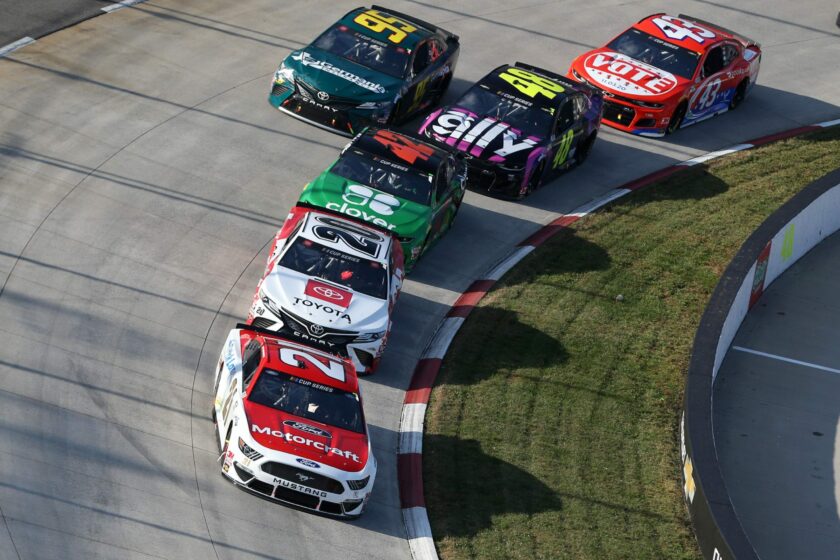 ​I have had a hard time getting inspired and finding anything to write about. I mean I love the racing at Martinsville; it not that and there was no shortage of hard short track racing. If I had the opportunity to choose only one race to got to in my lifetime it would have to be Martinsville, but in these times, who knows what the future holds. But what we now do know about the Truck Series is that Austin Hill, Tyler Ankrum and Sheldon Creed are returning to their teams in 2021. In the Truck race we saw a lot of yellow flags,11 cautions for 82 laps that’s 41% of the 200-lap race. Another note here, it took 22 laps under caution to sort out the running order and preform pitstops at the stage breaks, that is 11% of the race! Hey NASCAR, IMHO that’s way too much.  Maybe it’s time to put on the thinking – caps on that one! You may argue that this or that happened on the lap coming to the Green – White flag but this is something that’s been bugging me with the stage racing. This race was set up with Stages 1 and 2, 50 laps and the last Stage 100 laps, not 50 laps in Stage1, 40 laps in Stage 2 and 87 laps in Stage 3!

Last week Lady Luck was not smiling at Grant Enfinger when he blew the engine. This week she was downright cruel to Austin Hill when his engine let go on lap 117. With Lady Luck on his side this week Grant Enfinger won the race after surviving a couple of restarts and racing hard with his teammate Ben Rhodes, that came in second, and others. Zane Smith came third with Christian Eckes fourth and Matt Crafton in fifth. Shout out of the week Danny Bohn P 7, and Austin Wayne Self P 9.

What to say about the NXS race? I don’t know but to me it almost seemed like the race never really lifted. I mean there was some good racing for most of the race. A mix of strategies, well what else could one want? Maybe if the NBC-booth didn’t get ballistic for every slight contact between the race cars and how this would impact the “play off” standings. Anyway near the end of the day we saw just how good AJ Allmendinger is on tracks like Martinsville, leading 68 laps of the race until he cut a tire and ended his race winning hopes by having to pit under green, after racing with Harrison Burton. With AJ Allmendinger two laps down there was no stopping Harrison Burton. Not even a caution on lap 214 and a restart and fighting with his cousin Jeb Burton. At the end of it, Harrison Burton took the Checkered flag, making it two in a row, with Justin Allgaier second, Noah Gragson in third and Jeb Burton held on to fourth place just before Ross Chastain in fifth. So, all in all not a bad day for JR Motorsports when their fourth driver Michael Annett came in eighth. I have been following Josh Williams for a few weeks now, so I was happy to see that he is signed with DGM Racing for next year.

Quite normal Martinsville racing upfront in the Cup race with drivers fighting to stay on the bottom lane and others trying to get down in line near the front of the pack. As the “play off” drivers started up front it soon become clear that the two strongest cars were the #9 and the #19 and together they lead 365 of the 500 laps. The only one of the “play offers” that seemed to go backwards was Kevin Harvick. Sorry to say but it seemed like the #4 team completely missed the setup on the car and soon disaster struck when Harvick cut a tire after racing hard with Matt Kenseth and had to pit under green. Up front the lead changed hands when pit strategy came in to play but it didn’t take too long before Chase Elliott and Martin Truex Jr were back up front again. A mistake on the pitstop after stage two forced Denny Hamlin to make an extra pitstop. I was surprised just how many mistakes were made on the pit road, but a couple of things stand out. First, Chase Elliott’s jackman, Tyler Semke, discovered he was over the wall too soon but ran back to the pit-wall to reset himself from the penalty before jacking the car, only losing a couple of spots instead of starting at the tail end of the longest line. Second, 10 pit road speeding penalties and fastest man on pit road leader Quin Houff extended his lead by having two of them!

Upfront, Ryan Blaney and Joey Logano swapped the lead between them, keeping Kevin Harvick’s “play off final” dreams alive up until Martin Truex Jr took over the lead. On the last pitstop of the day with 59 laps to go, Corey LaJoie had managed to stay on the lead lap, and with no sticker tires left in the pit he opted for more TV time instead and stayed on the racetrack to take over the lead. On the restart Corey LaJoie gave it all he had, trying to keep the lead for a while but NASCAR deemed him to have jumpstarted. Hard to tell if LaJoie gunned it a few feet before entering the restart zone or not, and Corey LaJoie had to serve a pass-through penalty that left him two laps down, ending up in P 25. Chase Elliott had had one of the best cars all day long and it didn’t take long before he took over the lead from Martin Truex Jr who eventually had to give up the fight with a loose right front wheel. When the checkered flag flew over the race, Chase Elliott took the victory with Ryan Blaney in second and Joey Logano third. Kevin Harvick made it up to around top ten before coming to the checkers spun himself and Kyle Busch out while Harvick limped over the line, as the last car on the lead lap, after hitting the wall. Kyle Busch on the other hand, made a perfect 360 spin and crossed the finish line in ninth, the same spot he had before the spin. Further down the field, Denny Hamlin “managed” to hold on to his position with a much faster Eric Jones behind him. I’m not going to say anything about the discussions and the NASCAR ruling. It is what it is and maybe not how I wanted it to be!

With the Halloween weekend behind us and also the announcement from Archie St Hilaire that GoFas Racing is going to scale back to part time next year, it feels a bit sad to me. Anyways I want to say Thanks to GoFas Racing it has been a GREAT team to follow and always have had the BEST-looking racecars at the tracks, cars like this HallowKeen Car (below). Thanks to TJ and Tom Keen standing behind so many of these fantastic race cars, and for the use of the pic! I’m so excited to see what’s next for you guys.