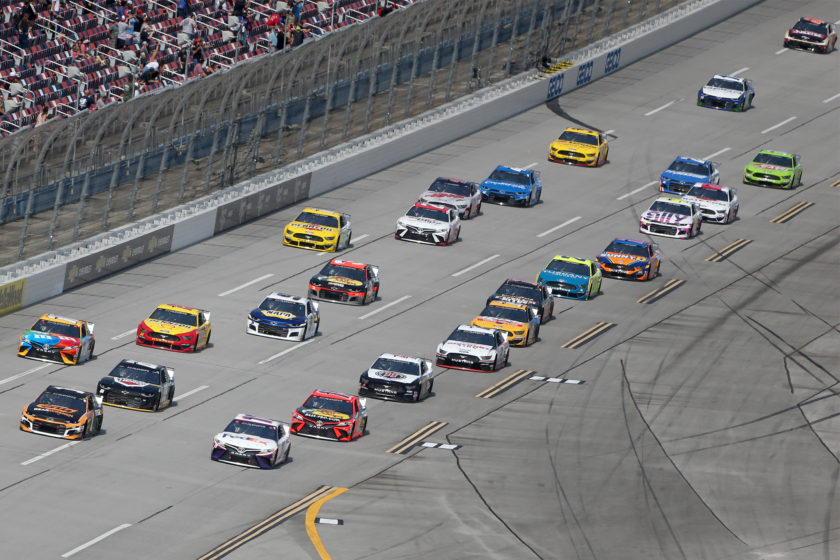 Going into the weekend we had a tight schedule with a doubleheader in IndyCar at Indianapolis road course and the races at Talladega. Racing at Dega is always a nail-biting experience so let’s start there and with the Sunday Cup race.

We saw some fantastic racing with three lines going mostly in the beginning of the race but also some low points with blocking gone wrong but with the energy in the runs coming from two, three or more cars behind. There’s no margin for errors, and maybe that’s a part of what makes Superspeedway racing nail-biting. This time we got a very controversial finish with Denny Hamlin crossing the line first just a fender before Matt DiBenedetto. However NASCAR called for a penalty on the #21 of DiBenedetto after he forced William Byron to go under the double yellow lines and almost wreck. Denny Hamlin also ducked under the lines to avoid the mess. While Byron got his car under control and entered the racing surface again, Hamlin held his car straight and rode the apron almost to the exit of the corner. NASCAR also penalized Chase Elliott for passing below the yellow lines, putting both driver at the tail end of the lead lap. However, HMS submitted a protest arguing that the #9 was forced below the lines by the #17 car of Chris Buescher and after review NASCAR reversed the penalty against Chase Elliott and instead penalized the #17 for forcing the #9 down below the line. I may not like it but I can understand the Penalty against Matt DiBenedetto. NASCAR had called the #22 team and Joey Logano for the same penalty twice earlier in the race, but IMHO NASCAR opened up a can of worms when they reversed the call on the #9 and #17 and letting Denny Hamlin’s win stand! Let’s leave the Cup race at that and go with a positive note and a shout out to Brennan Poole who brought home a P 9 for the #15 team!

I have not too much to say about the Xfinity race; a rather normal “plate-race” so to say, kind of “Cup light” with some drivers missing out on the blocking and other drivers surviving to score a good finish while other drivers were not so lucky. One of the things to love about Superspeedway racing is teams that work with low budgets can stay out of harm’s way and score great finishes in all three series and one of them was this week’s Dega Xfinity race winner Justin Haley. Last year he won the Coke Zero 400 at Daytona driving for Spire Motorsports, Haley took his third Superspeedway win in a row, this time in front of Michel Annett and Ryan Sieg. Unfortunately, the #1 car was found too low in the left front during the post-race inspection! NASCAR disqualified the #1 car and Michael Annett was credited with a last place finish, while Ryan Sieg found himself in second and Noah Gragson in third! Shout out to Josh Williams in the #92 and Garrett Smithley in the #07 P 7 and 8!

I had high hopes for Todd Gilliland going into the Truck race but that ended when the motor in his #38 truck let go on lap 48. Just moments later Tanner Gray in the DGR #15 slid in the oil from the #38 ending his day into the wall, so not a good day for the Gillilands. Some positive notes here… Jennifer Jo Cobb led 16 laps, the most laps she ever led in her NASCAR career when she and a few other a bit slower trucks hooked up with Austin Hill who had had a speeding penalty under green flag pitstops and was running a lap down.
At the end of the race it was Canadian KBM driver Raphael Lessard in the #4 truck who took the win over Trevor Bayne and Lessards team-mate Chandler Smith. Shout out to Codie Rohrbaugh, Jordan Anderson and Kaz Grala P 5, 6 and 9.

A few words about the Indy car races… I had some hopes for our Swedish drivers going into this weekend but the Chip Ganassi teams didn’t seem to have the speed and handling in their cars this weekend. Not even Scott Dixon managed to come close to the front and only managed to come away with a 9 and a 8 place finish that left Felix Rosenqvist’s P 5 finish in race 1 the best CGR finish of the weekend. Don’t get me wrong here, the racing was quite good overall and maybe some of the best racing, in Indy Car, we’ve seen this year at the beginning of race 1 not so much in race 2 where Will Power was the class of the field as he lead all of the laps making it a Penske Racing sweep as his team-mate Josef Newgarden won the first race. Alexander Rossi had a good weekend with a P2 finish in the first race and a P3 in the second race. Third place for Dutch driver Rinus VeeKay, who started from pole in the first race, but only qualified P14 in the second race and never come into the mix! Colton Herta had a good weekend with a P 4 in the first race and came in second in the next race, all in all some good racing but from a Swedish stand point not too much to write home about!

I’m going to leave you here with a few words and a link. One can’t call out for NASCAR to make a rule change every time a driver you don’t like wins a race. Click on the link and Read what Ty Dillon had to say in the last paragraph of the Article!!