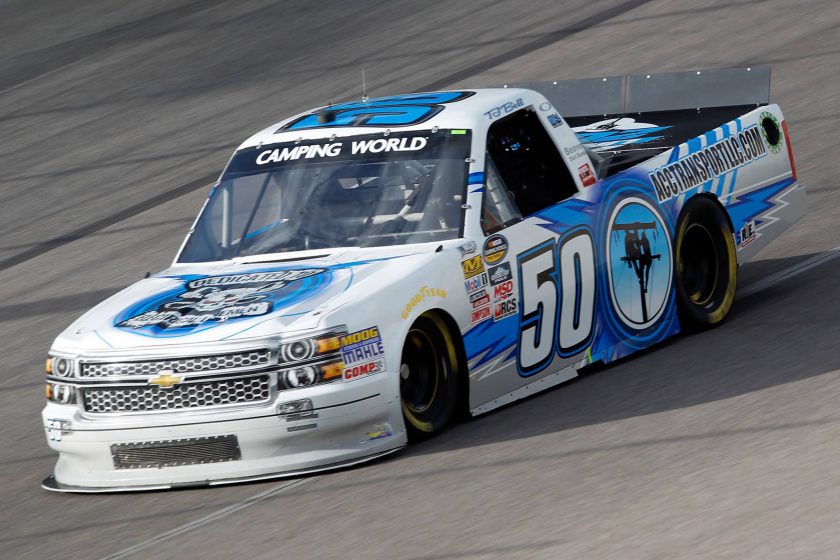 As some of you may know we at Pure Thunder Racing love NASCAR racing and we also want to highlight the teams “outside” TV-broadcasters spotlights. This time we set our focus on one of the smaller Camping World Truck Series teams, MAKE Motorsports that operates two Chevrolet Silverado trucks (#1 & 50) in the Truck series. Amanda Beaver was kind enough to take the time to answer a few questions for us about MAKE Motorsports for this article.

MAKE Motorsports are Co-owned by Mark Beaver and Tracy Lowe, and the team made its start during the 2010 season. The moniker “MAKE” is made up of the first letters of the first names of the owners’ children – Beaver’s son Mikey and daughters Amanda and Emily, and Lowe’s daughter Katelyn.

WITH OVER 50 YEARS OF RACING EXPERIENCE BETWEEN THE TWO THEY FEEL AS THOUGH THEY WERE PREPARED TO TAKE ON NASCAR’S TOP LEVEL TEAMS.

Mark Beaver has experience in a wide variety of racing venues such as NHRA, IHRA, Super Late Model Dirt Series, Legends, SCCA Trans Am and SCCA World Challenge teams. He has owned and won multiple championships on the National level.

As one of the few female owners in NASCAR, Tracy has owned or competed in Dirt Late Models and SCCA. This team has a family atmosphere, which is very hard to come by in this industry. This is a team that treats its crew, partners, and guests as if they are apart of their family. MAKE Motorsports is committed to excellence with its partners and the NASCAR community.

Q. Can you tell us a bit about the personnel behind MAKE Motorsports?

A. Our personnel is currently changing up so I can’t really specify on it. Mark Beaver and Tracy Lowe Co-own the team. I (Amanda Beaver) am the PR Rep and am also the race strategist.

Q. We also like to know a little more about a “normal” race weekend, like what about the road crew and also if you bring your own pit crew; maybe a bit about the logistics involved?

A. We have our core guys which also work in the shop as well as on the road. We use Hendrick Motorsports Developmental pit crews. Our team is extremely small so our numbers are low. We only have at most 10-12 people that travel on a race weekend for both trucks. That includes management, drivers, road crew, etc.

Q. Do you have any cooperation between your team and other teams in CWTS or in other series you work with or have as “technology partners” that you work closely with? If so, in what?

A: We currently don’t have any formal technical alliances.

Q. Can you tell us a little bit about your relationship with Chevrolet and if you get any support from them??

A. We do get some small engineering support but we are a small team.

Q. What can NASCAR do for the smaller teams in the field to attract sponsorship and help their business, like media time (TV, Radio, interviews etc.).

A. NASCAR has an entire department dedicated to helping teams in any way.

Q. What were some of the hurdles that the organization met when going from one truck to two? And also the benefits of running two teams.

A. The main hurdle was funding and equipment. Both however go hand and hand.

Q. How much does it cost to run a Truck in the CWTS (approx) broken down the costs to a more detailed level (tires, transports, personnel etc.) for one (1) race weekend and one season?

A. All of these items vary greatly so it would be hard to say what an actual race budget would be. However a set of tires cost $2300 and engines can costs upwards of $30000 depending on the engine program.

Q. What are some of the challenges that a smaller budget team faces regarding coasts?

A- The hardest part to the west coast races is logistics and making sure we have the equipment and race vehicles.

Q. Some of the Goals and milestones for the team, and also a little about the sponsorship situation now and in the future?

A. We are working on some sponsorship deals that could be great for us. In the meantime we will take it day by day!

Q. Where do you see you MAKE Motorsports by the end of the season and in five years? Any plans on moving up into Xfinity or Sprint Cup?

A. We have ran Xfinity series in the past, including a full season in 2012. Right now our home is in the trucks and that is where we plan to stay.

Q. Finally, what’s the best moment in racing so far?

A. We would have to say qualifying for the Daytona truck race in 2011 and then this year our top-5 with Travis Kvapil. Going into Kansas and some additional races Make Motorsports announced a new primary sponsor, GasBuddy the Gas mobil app, is on the #50 Car for the 2003 NASCAR Camping World Truck Series Champion Travis Kvapil and with a little bit of luck on their side looking for a good finish inside the top 20!