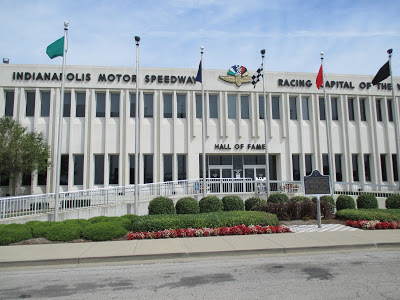 Carl Fisher and his business partners broke ground for the historic and iconic Indianapolis Motor Speedway on March 15th, 1909. Carl Fisher and his partners sold the track to Eddie Rickenbacker, a race car driver and WWI flying ace, in 1927. Rickenbacker then sold the track to the Hulman-George family on November 14th, 1945 The Hulman-George family still owns and operates the track. The 2.5 mile rectangular- shaped track is known as “the motor racing capital of the world”. 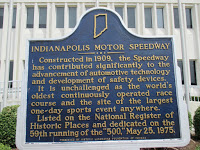 The oval race course was once all brick, 2.3 million bricks to be exact.  Today only a yard of bricks at the start/finish line still remain, giving IMS the nickname “the Brickyard.” The track hosted its first auto race on August 19, 1909. NASCAR made its first appearance on August 6, 1994 with the inaugural of the Brickyard 400, won by Jeff Gordon.

Over the years Indianapolis Motor Speedway has hosted over 250 races, using both the oval and road courses, including: Formula1, IndyCar, Untied SportsCar, Moto GP and, of course, NASCAR. IMS is the world’s oldest continually operated race course. 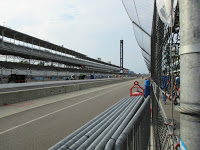 This world- famous race course, has some unusual features such as the Indianapolis Motor Speedway Hall of fame. The museum, opened in 1956, is nestled in the middle of the infield.  For a mere $8 you can ride a bus around the track. The Brickyard Crossing golf resort and hotel is also located on the grounds. This is an 18 hole golf course with 4 of the holes being in the infield. This famous venue even has its own zip code and small town. Speedway, Indiana, a tiny town with one main street, is located next to the track.

In 1998-2000 the speedway underwent some major renovations including a modernization of the famous 5- tiered timing and scoring pagoda. This is now a sleek modern building built of concrete, steel and plate glass. During this time, a 2.621 mile road course was incorporated into the existing oval. In 2014 further additions were made to the track– by adding big screen HD TV’s around the course and making the famous scoring tower digital. 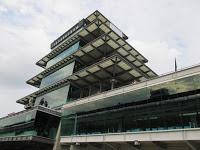 I have been lucky enough to have attended many events (including 2 Brickyard 400s and several Indy 500s) at the world- famous super speedway. The speedway is on the national register of historic places. The track is lined with massive aluminum bleachers.  Let me tell you that there isn’t a bad seat in the house!  There are a total of 257,325 permanent seats, and with infield seating the capacity rises to a total of 400,000, making the track the highest capacity sports venue in the world.

Ticket prices are very reasonable and the people in Indianapolis are very friendly in that mid- western American way. It is the kind of place that you can ask your neighbor to watch your bag, and come back an hour later to find that it hasn’t been touched. The food is great, with large American- style portions. The “Brickyard Burger” is a must try. The helpful and friendly track staff are known as “yellow shirts” because, well, they wear yellow shirts. 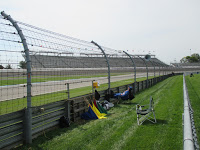 If you get the chance to visit the Indianapolis Motor Speedway to see the Brickyard 400 or any other event at the track, I would highly recommend it.  It will no doubt provide some great racing action and give you a lifetime of good memories.

Below is a list of the Brickyard 400 winning drivers.