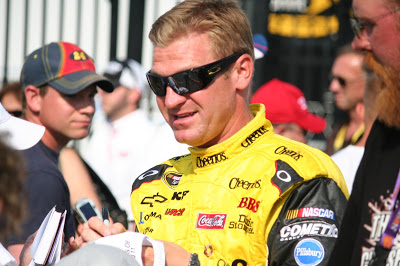 By: Stephen Dando  (Twitter: @SteveonTheGrid )
August 21, 2015
A business- like, even somber, Clint
Bowyer walked into the press room to discuss the closing of Michael Waltrip
Racing at the end of the 2015 season. The thirty-six year old driver, who is
only eight months into a three year contract is now a free agent.Bowyer feels
that there are a lot of unknowns, but he “had a great four years at this
company. A great culture, great personnel, great people at MWR and I really did
enjoy the years I spent there.” Bowyer went on to explain that his 2016
season is nearly fully funded and he is proud of his relationship with Five
Hour Energy.
One thing is certain– he will not be
driving for Chip Ganassi Racing next season. In 2016, Clint Bowyer could drive
for Stewart-Haas Racing or Richard Petty Motorsports, or even another team. Bowyer,
who has eight career wins tries to make the best of a difficult situation. Currently
fifteenth in points, he is on the bubble to make the Chase. Staying focused and
doing their jobs, team members intend to finish the season on a high note in
the Chase.
Michael Waltrip Racing is closing its
doors because co-owner and team financier Rob Kauffman has purchased a stake in
Chip Ganassi Racing. Kauffman stated that he and Michael Waltrip are close friends,
but he doesn’t feel that the current business model makes sense and is
therefore leaving the organization. Kauffman said that this is a performance
driven business and to have a top ten budget you must perform as a top ten
team.
Kauffman stated that the Richmond scandal
dealt the team a “body blow”. On a fateful night in 2013 in Richmond,
Bowyer spun, bringing out the caution flag, thus aiding his teammate Martin
Truex, Jr. to make the Chase. All of three cars were docked fifty points and
fined $300,000, thus knocking Truex out of the Chase. Napa Auto Parts withdrew
its sponsorship. That was the beginning of the end for the MWR organization.
The team hasn’t had a victory since then.