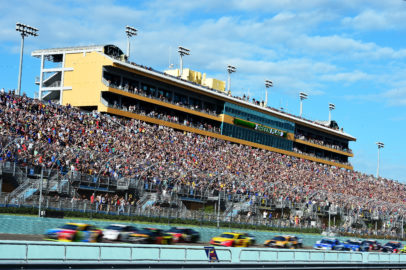 Lets hope this isn’t the last race of the season and the season can follow along the schedule below! and nothing drastic happen on the Corona situation!

A few words on the Wednesday night race at Martinsville, we where fortunate enough  to not see any rain delays!. Even though the leader was very hard to pass, we sew much good racing . What surprised me most was how many team who missed out on the setup of the car!! But we got to see some hard racing when team trying to to recover! Overall I think NASCAR done a great jobb with lining up the cars and handling the race format with no practice!

Homestead Miami Speedway up next

Homestead Miami Speedway opened in November 1995 with a NASCARBusch Series race, the last race of that season. In the spring of 1996, the CART series held its first race there. The racing at Homestead was not considered very good. The track opened as a four-turn, rectangular-oval, based on the Indianapolis Motor Speedway‘s layout, However, due to its shorter distance, the track was not able to maintain the racing characteristics of the Indianapolis Motor Speedway. Instead, the sharp, flat turns and aprons made passing difficult and lowered overall speed. The geometry also created unfavorably severe crash angles.

In 1996, track management attempted to correct the problems by widening the aprons of the turns by as much as 24 feet (7.3 m). In 2003, On March 26, 2006, Indy Racing League driver Paul Dana suffered fatal injuries in the warm-up session before the race when he was involved in a high-speed collision with Ed Carpenter at over 215 mph (346 km/h). Other drivers to suffer fatal injuries at the speedway are John Nemechek in a Craftsman Truck race on March 16, 1997, and Jeff Clinton who died in a Grand Am sports car event at the track in March 2002.

The track was reconfigured once again. The turns were changed from mostly flat to steep variable banking. In 2005, lights were installed to allow night racing for the first time. The renovations were praised by fans, and the track has produced a number of close finishes, including 2005‘s last-lap battle between Greg Biffle and Mark Martin.

Last a quick look forward on what the NASCAR and Indycar schedule looks like after this weekend at Homestead Miami Speedway: and from what been announced so far, as far as We know.