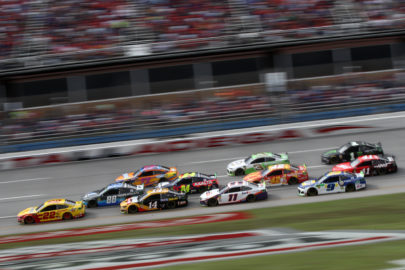 Short look back at Homestead-Miami Speedway races. We hade a lot of racing in just one weekend with some decent racing action due to a multi groove race track and lots of tire wear. IMHO the best racing of the week end was in the first of the NASCAR Xfinity Series race. Sunday’s Xfinity race was not quite as exciting, with the invert of the field.  I hoped for a little more, on the other hand teams have had a 250 mile “practice session” the day before! The NASCAR Cup Series race was OK when it finally got started. I can’t even begin to tell you how much I hate delays in those night races –  but what can you do! The NASCAR Truck Series race was not to much to say about other than Kyle Busch did his best to keep up the excitement starting at the back and with a pass true penalty! Well, on to Dega!!

Talladega Superspeedway, nicknamed “Dega”, and formerly named Alabama International Motor Speedway (AIMS), is a motorsports complex located north of Talladega, Alabama. It is located on the former Anniston Air Force Base in the small city of Lincoln. A tri-oval, the track was constructed in 1969 by the International Speedway Corporation, a business controlled by the France Family. The track currently hosts the NASCAR Cup Series, NASCAR Xfinity Series, and NASCAR Gander RV & Outdoors Truck Series. Talladega is the longest NASCAR oval, with a length of 2.66 miles (4.281 km), compared to the Daytona International Speedway, which is 2.5 miles (4.023km) long. Speeds in excess of 200 mph (320 km/h) are commonplace at Talladega. Talladega has the record for the fastest recorded time by a NASCAR vehicle on a closed oval course, with the record of 216.309 mph (348.116 km/h) set by Rusty Wallace on June 9, 2004. Wallace circled the 2.66-mile (4.28-km) trioval in 44.270 seconds, which surpassed the previous record held by Bill Elliott (212.809 mph (342.483 km/h)) set in 1987, but did not replace the record because it was a radio test and not a NASCAR sanctioned event.

Numerous strange occurrences at the track have led to rumors of Talladega being cursed. Stories of the origin of the curse vary. Some claim that a local Native American tribe held horse races in the valley where the track currently resides where a chief was killed when he was thrown from his horse. Others say that the site of the superspeedway was once an Indian burial ground. Still another version says that after the local tribe was driven out by the Creek nation for their collaborating with the forces of Andrew Jackson, a shaman put a curse on the valley. You can read more about the Talladega Curse here: https://www.racefansforever.org/tales-of-the-talladega-curse.html

We start up the weekend on Saturday with an ARCA Race followed by the Xfinity race later on. At first, NASCAR planed to have a short practice session for the Cup cars, but after talks with the teams NASCAR decided to cancel it although NASCAR have made some significant changes to the cars after the near disaster in the Daytona 500! You can read more on the changes here: https://www.autoweek.com/racing/nascar/a32873835/inside-the-rule-changes-resulting-from-ryan-newmans-daytona-500-crash/

But in short, NASCAR reduces the horsepower to about 500 with a smaller tapered spacer, no aero-ducks and slip tape on the back bumper of the cars to prevent locking up!

NASCAR announced earlier this week, due to the Corona situation in North Carolina, that the All Star race on Wednesday the 15 is to be moved from Charlotte to Bristol allowing 30 000 fans back in the stands!